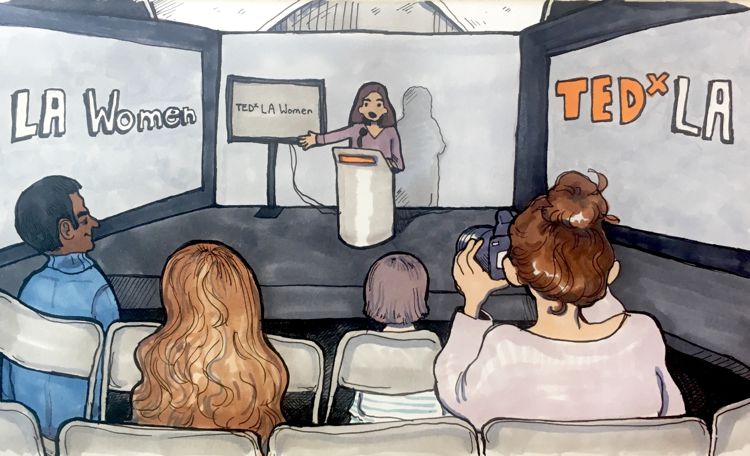 TEDxLA, a Los Angeles based organization that produces TED Talk-like events, hosted a discussion panel of local female-identifying activists and a viewing session from TEDWomen’s annual conference Oct. 28. The TEDWomen’s conference was held in San Francisco earlier in the week. The session shown at the TEDxLA event was titled, “It’s About Equal Time,” a variant of the main TEDWomen theme, “It’s About Time.” In addition to the recording, TEDxLA’s panel discussion featured speakers from the local area who share their experiences.

The TEDxLA event was held at a Cross Campus office space on Wilshire Boulevard downtown. With its monochrome interior, walls of windows and an open bar serving wine and beer on tap, the event screamed stereotypical sleek LA.

The occupations of the eight speakers on the recording ranged from law professor to performer, doula to researcher. However, they all had one unifying factor; they were all feminists with a message about how the intersection of race, culture, socioeconomic status and gender impact equality in today’s society. Each spoke about the inequalities they have faced and what they, ordinary individuals-turned-leader are doing to make a change.

Intersectionality, according to the TedWomen speakers, referred to how individuals who belong to more than one disadvantaged group suffer from acute discrimination and marginalization. The first women to speak on the recording were Alicia Garza, Patrisse Cullors and Opal Tometi, the founders of the Black Lives Matter movement. They spoke on a panel that delved deep into roots of racism and the discrimination that members of the black community face daily.

Drawing from their own experiences as women of color, they made it clear that the current “solutions” for inequality — be it financial, gender-based or otherwise — are ineffective. They argued that the changes being made are ineffective because the solutions are being applied at the top, to those who have experienced little to no discrimination, financial insecurity, or violence, and are expected to “trickle down” to those most in need. Garza, Cullors and Tometi instead suggested all problems of this nature should be addressed at its roots, helping those in most need first. In reference to her experiences with discrimination and violence, Garza said that “When black people are free, everyone is free.” This is because of the “bubble up effect.” The positive repercussions of changes made could be expected to “bubble up” and benefit everyone in the system.

Another theme was to encourage all individuals, those who have experienced marginalization and discrimination, and even those who haven’t, to actively change normative social behaviors and standards. Activist, mother and researcher C. Nicole Mason discussed the phenomena of calling women “difficult” and how being “difficult” is one of the best things a modern woman can be. She explained that calling a woman or individual difficult is how some people respond to women breaking social norms. “Difficulty,” said Mason, “is the secret sauce of powerful women.” In effect, women who do not follow the standards and expectations that society imposes on them, are disrupting the popular narrative and sparking change. These small deviances ought to be encouraged, as small actions, such as breaking societal expectations, can start a cascade of social change.

After the recording of the TEDWomen session concluded, local speakers took to the stage after a brief intermission. The TEDxLA speakers came from a variety of backgrounds and professions. Their speeches covered topics ranging from body image and mental health to workplace discrimination to one’s journey of self-discovery through musical ambitions. The event was a culmination of intersectional feminism, powerful women and hope for the future.