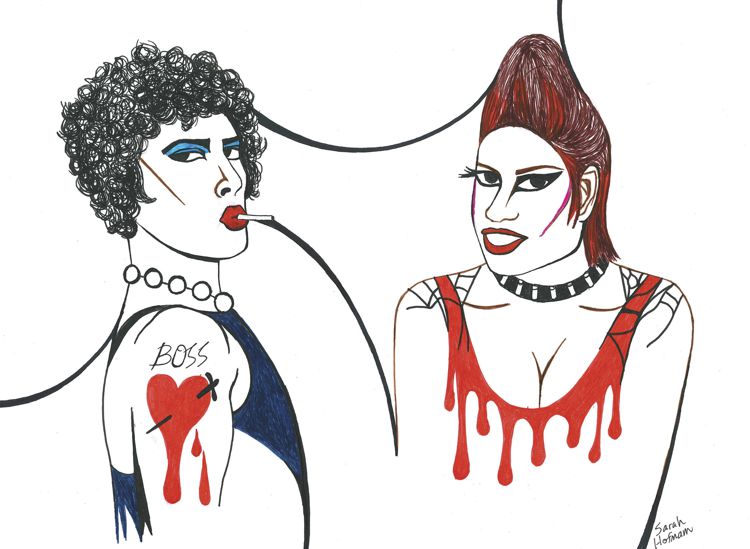 FOX premiered their remake of the classic cult musical “The Rocky Horror Picture Show,” starring Laverne Cox, Victoria Justice, Adam Lambert and Christina Milian, among others, last Thursday. Unlike the network’s previous entry in the recent TV-musical remake craze, “Grease! Live,” this show was not a live performance, but pre-taped.

The broadcast, while enjoyable on some levels, was a disappointment to many avid Rocky fans. The biggest issue with the broadcast was not the quality of the actors’ performances, but the production itself. It is understandable that the network chose to pre-record the performance, as it gave more flexibility with the sets. The castle exterior, the science lab and the performance stage were all glamorous and well-rendered — but that polished touch was part of the problem.

The original Rocky movie is a provocative, low-budget camp classic, which is unforgettable because of the soul in the music and the joy and hilarity of the actors’ performances. In focusing so much on production value, the remake neglected these aspects, losing much of the heart of Rocky in the process. Excellent costumes, makeup, choreography and staging cannot make up for that loss. It was even felt in the way the actors and dancers interacted and in the musical arrangements. The songs may actually have benefited from a live performance, because they were just a little too perfect, lacking the punch of the original soundtrack. The actors, with the exceptions of Reeve Carney, Annaleigh Ashford, Ryan McCartan and Laverne Cox, were rote and distant, which ruined the energy exchange between the performers and the audience.

This failure to connect is also due to the nature of the material. When the movie came out 40 years ago, its pansexual, gender-bending explicitness made it an instant landmark of queer culture. It was both tongue-in-cheek social commentary and pure shock value. These days, that kind of content is not nearly as shocking as it was, nor as original. Even worse, the remake aired on a popular network during primetime, so many of the most risqué elements were toned down or eliminated for mainstream audiences. This sanitized approach is contrary to the intent of Rocky, and it weakened the whole presentation.

Many have pointed to Cox’s central role playing the iconic Dr. Frank-N-Furter as another source of disappointment. Let’s get it out of the way: She wasn’t Tim Curry. But this should not be held against her, since nobody can be Tim Curry, who incidentally made an endearing guest appearance as the Criminologist. Cox gave a kooky and commendable performance as the mad scientist/transvestite, showing off her vocal ability without over-singing. Her performance had a warmth that was unexpected for the typically glacial villain, but not unwelcome. Perhaps discouragingly for Cox, discussion of her role has centered little on her actual performance and much on the implications of a trans woman playing a male transvestite. Harmful Facebook comments aside, it is true that the casting decision invites confusion between the two. This is troubling because that same confusion is a central tenet of transphobia — trans women are jeered and ostracized because people see them as men dressing like women. Despite how well Cox fit the role, this consequence of her casting makes it hard to regard positively.

Fortunately, many of the stars gave irrefutably fabulous performances, namely Carney as Riff Raff, Ashford as Columbia and McCartan as Brad. Carney was simpering, menacing and entirely creepy, and Ashford’s heartfelt portrayal of her character was impressively subtle. The real surprise was McCartan, a Disney star who has apparently decided to transition to less family-friendly material. His performance as the initially wholesome male lead, Brad, was full of awkward, nerdy bluster, and yet when the time came for him to don a corset, fishnet tights and gold lipstick, he did not seem at all out of his element.

The same cannot be said of Victoria Justice, who played the female lead, Janet. Unlike McCartan, Justice was not believable in portraying her character’s journey to sexual corruption, and at key moments, her voice was overwhelmed by the backing vocalists. Indeed, none of the big-name stars delivered the way their more obscure cast mates did. Christina Milian’s acting as Magenta was delightfully over-the-top, but her singing left much to be desired. Conversely, Adam Lambert sang the role of Eddie flawlessly, but his mannerisms were painfully forced.

FOX’s attempt at Rocky was brave, and it would have been wonderful if they could have made the beloved musical a viable mainstream hit. However, for contextual reasons, production and performance missteps, they failed. Instead, the broadcast was a cautionary tale for the film industry that some underground cult classics are meant to stay that way.

Love Cult Classics? Email us at weekly@oxy.edu or Tweet us @OxyWeekly