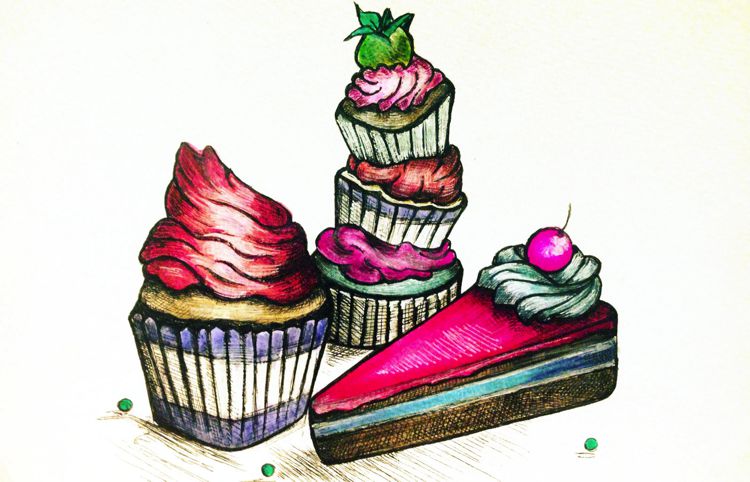 Oversized wooden doughnuts with colorful sprinkles framed a wall pegged with Dunkin Donuts’s confections, complete with a range of pink, white, brown and orange icing melting in the high Los Angeles sun. By 1 p.m. the aroma of freshly baked goods wafted over a line of eager and hungry sweet tooths that had formed underneath an arch of pink, baby blue, gray and teal balloons at Pershing Square in Downtown Los Angeles. Oct. 15 was the culmination of Los Angeles’ first annual Dessert Week.

The idea for Dessert Week LA struck creator Daniel Amitin when he was imagining a cheat week of dessert eating. Los Angeles is known for its food scene, enough so to have restaurant week, “dineLA”, in January and July. Because dessert specialty shops have been popping up all over the city, it was only a matter of time before dessert would have its time to shine.

This summer, Angelenos were able to vote for their favorite dessert spots to select the official top 25 vendors to participate in the Dessert Week LA. During the actual Dessert Week, Oct. 9–15, the selected vendors offered deals and discounts to ticket holders for the live event. For Saturday’s eight hour event, the 25 vendors offered samples of their most popular sweets — with full-sized options also for sale. In addition to the vendors, the event featured cupcake decorating contests, pie eating contests, face painting, lawn games, a beer garden for those 21+ and live music.

General admission for the event was $15 and included samples from 10 vendors of one’s choosing. There was also a VIP option for $25 that expanded upon the general tickets with samples from all 25 vendors, a drink ticket and early admission.

The event drew a mixed crowd that included people of all ages. Children on sugar highs darted around on the grassy areas between cliques of high school students, VIPs glammed out posing for iPhone photoshoots and four Occidental students tried to eat as much dessert as possible.

We went in with a seemingly perfect strategy: evaluate the layout and carefully select which 10 vendors we would sample. Upon entering the event, we realized we had to ditch our plan. People were rushing from each brightly decorated tent to the next. The lines of booths seemed daunting and our options endless. We made our way through Southern style banana pudding from the Pudding Truck, ate the “lonely boy” — Oreo crusted chocolate pie with potato chips and maple custard pie courtesy of Pie Hole and indulged in cucumber ice cream from Saffron and Rose.

By the fourth sample, salted caramel churros and ice cream sundaes from Ridges Churro Bar, we had hit a dessert wall and paused for a half hour water break before attempting to try anything else. The sun was beating down, one line of attendees indistinguishable from the next, people were rushing with energy while others were suffering from sugar overloads. But the desserts were calling us, specifically a maple bacon cruffin (a croissant-muffin hybrid) from Breadologie Bakery, blueberry elderberry ice cream from Wanderlust and mille crepes — Lady M Cake Boutique‘s specialty. Thankfully the growing lines provided enough of a break between treats, which, combined with the sun dropping behind buildings, made the second half of the event more enjoyable.

After four hours and nine sugary confections, we waved our tasting cards in defeat, amazed that the event could possibly continue until 8 p.m. We left Dessert Week with full stomachs and sweet cravings satisfied, moaning to not eat ice cream for the remainder of the semester — a successful event in my book.

While chaotic at times, Dessert Week LA was an easy way to taste test trendy sweet spots from all over the city in one location, and for only $15 per person. For those who missed out on the first annual Dessert Week LA, the second is in the works. The event’s website already has a countdown for next year’s event in October.

Have a sweet tooth? Email us at weekly@oxy.edu or Tweet us @OxyWeekly