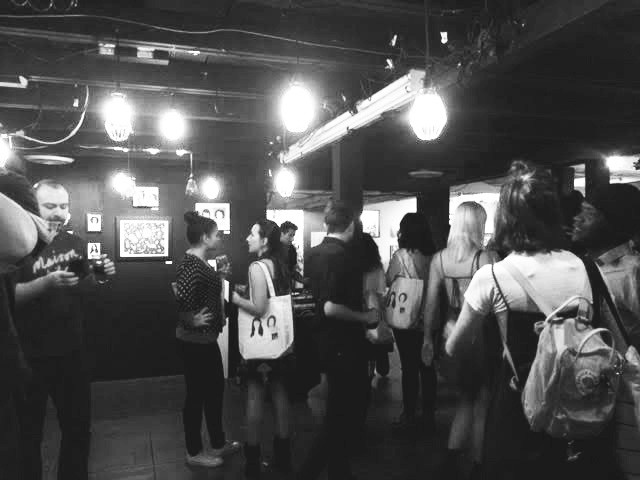 Comedy Central’s Broad City is more than a just television show. It is a lifestyle. So it is no wonder the opening night of a Los Angeles-based, Broad City themed pop-up art show, was more than just an art show. It was a party. Hosted by Eat More Art Out Productions, the exhibit, titled “NOMO FOMO: An Art Show About Broads in the City,” debuted at Meltdown Comics and Collectibles on Sunset Boulevard Sept. 30.

A pink taco truck satisfied the excited mass of viewers who lined up around the block, waiting to get in. Entering the space mirrored the opening sequence to an episode of the show — loud music blasted from the live DJ Audiomoe’s speakers and the wild, bright colors of the fan art covered seemingly every inch of the walls. Recreations of main characters Abbi and Ilana’s apartments  filled the corners and a look-alike of Abbi’s famous blue dress hung from the ceiling. The art show extended beyond the walls; the blaring music and vivid colors easily brought an immediate smile to any and all fans of the hit comedy.

A New York-based sketch comedy show, “Broad City,” centers on two broke women in their twenties struggling to succeed at adulthood. Beyond being outrageously funny, the show reaches into so many young people’s lives with its honest — sometimes brutally so — depictions of modern day sex, sexuality, drugs and awkward social interactions; themes often overlooked by mainstream cable television. Starting as a web series in 2009 and finally airing on cable television in 2014, Broad City was created by and stars writers Abbi Jacobson and Ilana Glazer.

A typical episode highlights consensual experimentation with different kinds of sex, complex relationships in visiting hometowns or the struggle to find creative and rewarding careers post-college-graduation. Ilana is openly bisexual, both women frequently smoke weed, and freely engage with “provocative” topics like religion, politics and fake handbags. Their jobs are not glamorous, their apartments are not glamorous and their lives certainly are not glamorous. They are young and poor, and lost as millennials on the cusp of adulthood. Yet somehow, Abbi and Ilana always seem to be having a good time, promoting good sex and celebrating strong femme friendships.

The three women are avid fans of Broad City. While admiring fan art shared by the official Broad City Twitter and Instagram pages, Jane Dope came up with the idea of a Broad City-themed art show.

“One thing about our style is this is not white wall,” Sleazy Bake Oven said. “We make sets. We are going to put you in Ilana’s room, in Abbi’s room, in Abbi’s bathroom, We put you inside our theme. That is how we do all of our shows. You’re going to be in ‘Broad City.’ We are very into detail — it has to be right and we take that very seriously.”

From there, the women contacted artists asking them if they would be willing to display their art in their first week-long art show, “NOMO FOMO: An Art Show About Broads in the City.”

One of these artists was Sam Kimura, who flew out to Los Angeles from her hometown of Denver to attend the event. Kimura works for a nonprofit but makes cartoon art in her free time. Kimura’s art featured three sketches of Ilana napping on her toilet, in classic Ilana fashion, titled “Stay Woke I,” “Stay Woke II” and “Stay Woke III.” She said she sketched Ilana because she loves the show and how funny and applicable it is to her own life and experiences.

“They turn the sh—y things that happen to you as a young adult into funny things that are relatable that you can laugh at and be like, ‘I did that yesterday,’” Kimura said.

The work Sleazy Bake Oven and her counterparts put in clearly shows. I felt transported into a day in the life of Abbi and Ilana. But this meant more than obscure references to specific episodes. The show is a celebration of two women who by no means lead perfect lives, but are able to survive the struggles life throws at them with their best friend at their side and a joint in their hands. They never take anything too seriously and remind us to do the same.

The show runs until Oct. 7 and can be viewed during Meltdown Comics and Collectibles’ regular business hours Monday-Sunday 11 a.m.-10 p.m. and Wednesday 10 a.m.-10 p.m. Admission is free.