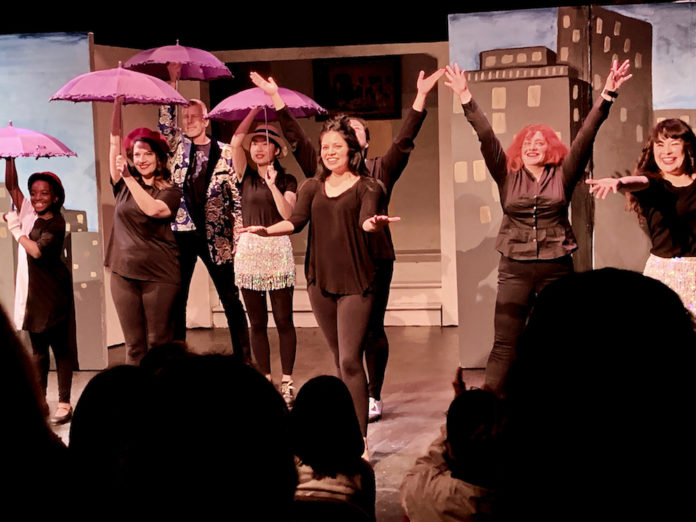 Sometimes a tap show is more than just a tap show. “TAP-water,” a South Pasadena-based production hosted in the Fremont Centre Theatre and performed by dance troupe The Tapitalists, tells the story of a dystopian Los Angeles plagued by global warming and oppressive heat. The ambiance of the narrative, reflective of films such as “Chinatown” and “Blade Runner,” paradoxically combines with joyful choreography similar to “Singing In The Rain.”

Howard Blume, the director and choreographer of “TAP-water” and a Los Angeles Times staff writer, teaches tap dancing for The Tapitalists. According to Blume, dance is a useful tool for storytelling, especially given its physicality.

“I think evolutionarily, it’s a survival skill to try to make sense of the world around you,” Blume said. “So with dance being such a visual medium, it lends itself to storytelling in a way that other mediums do not.”

The show’s plot, set in the year 2070, features the fourth Trump presidency, a drying United States and the state “Trumpafornia.” According to Blume, everything about “TAP-water,” including its plot and choreography, is entirely original.

“If I’m going to put so much effort into something, I want to create something new,” Blume said.

Christine Barry, a member of The Tapitalists, was a dancer in “TAP-water.” Barry had a brief stint with tap dancing when she was 12 years old, and about 20 years later, she returned to the art form in Blume’s classes. According to Barry, the classes gave her some of her closest friends and a supportive community that goes out for ice cream together after practices. Barry said her father-in-law even started tapping — now 70 years old, he is dancing as a performer for the first time in his life in “TAP-water.”

One of Barry’s favorite numbers, “Too Darn Hot,” is a sassy scene where she portrays one of four women who are entirely finished with the seemingly hopeless trials of romance.

“I’ve had friends and family come to see the performance, and I think they really were entertained,” Barry said. “They came expecting a tap recital, and it’s definitely not that. There is also comedy and singing.”

Composer Mark Davidson arranged the music for “TAP-water” in addition to serving as the live pianist for every night of the show. For Davidson, being a part of the production was both exciting and welcoming.

“It’s home, it’s fun,” Davidson said. “It’s thrilling to see the dancers up close every night when they perform, and so it is just a thrill for me because I’ve always loved to watch tap dancers.”

According to Davidson, one of his friends was a dancer for Blume, and that ultimately led to one of Davidson’s band recordings being used for the show.

“I loved what he did with it,” Davidson said. “He choreographed every bar, every measure of the music. It was absolutely astounding to me with all the 20-some dancers on stage.”

To Blume, the show asks audience members to consider if a dystopian climate-torn world of the future is, in actuality, already here. Regardless of the heavy topic, the performance is meant to be uplifting, Blume said, and it is ultimately a joyous dancing spectacle that encourages people to enjoy things often taken for granted, such as water and blue skies.

“Even though there is a dark premise in this story, admittedly, in the end, the joy of the dancing has to overcome everything,” Blume said. “Mostly, we just want to give the audience a rollicking, fun 70 minutes of great entertainment that they are happily talking about on the way out of the theater.”