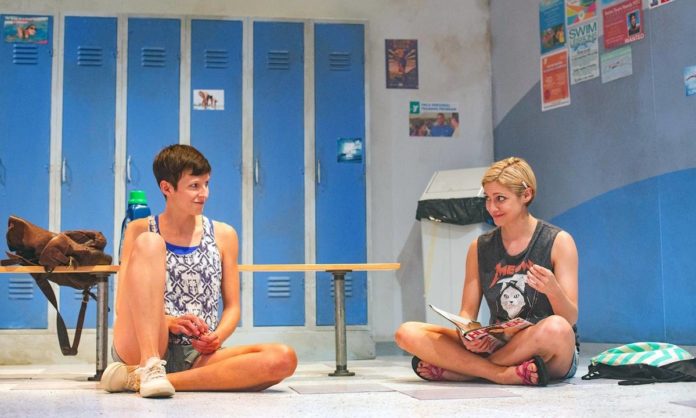 A dim blue light shines on a mildewy floor, focusing on a single drain. The sounds of splashing and shrieks of children fill the empty stage. One can almost smell the chlorine that lingers hours after being in a pool. Within moments, two girls in their bright swimsuits enter the locker room; one of them, Amy, yells, “Punch me!” to the other. The intent of their interaction is unclear from the start, but the audience quickly learns that it is Amy’s disturbing attempt to terminate her own unplanned pregnancy.

Written by Ruby Rae Spiegel, “Dry Land” follows two high school girls on a swim team, Ester and Amy, whose struggles echo the very real circumstances and issues afflicting many young women: abortion, eating disorders, suicide, sexuality and fear about the future. Amy enlists Ester’s help in getting an abortion, which results in an unlikely friendship that helps heal Ester of her own mental suffering.

Director Alana Dietze ’07 is an Occidental alumnae who has worked at Echo Theater Company since 2008. Dietze was a theater major and in her junior year played a lead role in guest director Chris Fields’ play “Bing” at Occidental. Fields, the artistic director at Echo Theater Company, encouraged Dietze to join the troupe, which is how she landed her first job at a professional theater. “Dry Land” is the second play she has directed; she fell in love with it after the first read.

“[Spiegel’s] voice is very authentic to young people,” Dietze said. “It stood out to me in its humor and in its pain. I thought she did a really amazing job of taking really big issues and making them very personal.”

The play’s subject matter strikes the viewer as familiar even if they have never experienced such things themselves. The story’s ability to captivate and appeal to such a wide audience made it all the more brilliant.

“The experience of these girls: dealing with their sexuality, their relationships with men, the loneliness of being a young person and feeling like you have to present yourself in a certain way in order to be received positively, but then also being punished for that,” Dietze said. “A lot of that resonated with me.”

As a director, Dietze’s goal was to let the story tell its own truth. She wanted the audience to laugh with the characters in their small joys and to feel their enormous pains, but in a way that was personal and honest.

“For me, the most important thing was to get to the heart of the truth of the play and to what these people are experiencing and feeling in these circumstances so that the audience can then have as true, resounding an experience as possible,” Dietze said.

The entire play, with the exception of one scene, takes place in a locker room. The light blue lockers, pastel swimsuits, splashing water sound effects and moldy walls evoke an odd nostalgia for the familiar sights and sounds of a public pool. The audience watches as Ester and Amy try alcohol, talk about sex, confess their deepest suffering, reveal their fears and share their hopes for the future. As typical high school students, their friendship is intimate, but awkward. One moment they’re laughing hysterically on the locker room floor and the next, Amy accuses Ester of being in love with her. They’re sweet and cruel and funny while trying to figure out who they are and how to be in a world where they find themselves terribly alone and facing frighteningly real struggles.

The play was received well by the 15 audience members present.

“I thought the acting was excellent,” Justin, an audience member, said. “The plot was a little disturbing, but I could see how it is reality or could be reality. I enjoyed it and the acting was superb.”

Gary, who attended the show with his wife, was moved by the human drama.

“I have four words for you: beautifully and brutally honest,” Gary said.

Amy and Ester’s story tackles heavy issues while still remaining light in humor. In the end, Amy is able to successfully and safely get an abortion and Ester lands a spot on a college swim team. In some form or another, everything turned out all right. This message in itself contains maybe the only true words that provide any source of comfort in the terrifying process of growing up.