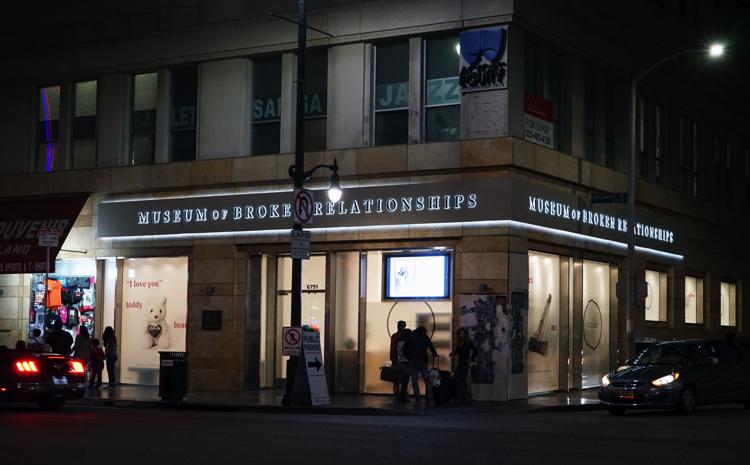 Los Angeles is a city built on dreams. Big name actors, directors and musicians pose for photos at every corner. The streets of Hollywood Boulevard are studded with the names of those who’ve made it in the industry. It’s inspiring, it’s breathtaking and it’s destructive. With so much at stake, the City of Angels can’t help but leave a trail of crushing defeat and broken hearts in its wake. The Museum of Broken Relationships is where Angelenos and heartbroken individuals from all over the world come to tell their stories. The museum opened in June 2016, emulating the original museum in Croatia.

Walking into the museum, you are confronted with stark white walls with an almost clinical level of cleanliness. They serve as the background for many ordinary and seemingly mundane objects: a green mug, an old cheerleader costume, a jar of Amish pickles. The accompanying stories bring the objects to life. People from all around the world anonymously donate their relationship relics along with a blurb about the significance attached to them. Entire relationships, gone and past, are hidden in each object. After traversing the exhibit, a green mug is no longer just a green mug.

The museum was inspired by the breakup between artists Olinka Vistica and Drazen Grubisic. They wondered what people did with items that once held emotional resonance in their relationship after a breakup. They set up their first permanent exhibit in 2010 in Zagreb, Croatia. Enthusiastic art collector John B. Quinn of the Los Angeles firm Quinn Emmanuel Urquhart & Sullivan brought the concept to LA in June, 2016. The Los Angeles museum’s director Alexis Hyde visited the exhibit in Croatia and was inspired to help Quinn to bring the emotions she felt in Croatia back home with her.

“I felt so connected, so profoundly human, hopeful and courageous. That feeling stuck with me and that’s what I wanted to achieve here” Hyde said.

At first glance, many of the pieces seem too hyper–specific to generate any genuine emotions from viewers. I wasn’t sure if I could relate to a handful of someone else’s pubic hair, a pair of sagging breast implants, an armful of autumn leaves or a simple diamond ring that lay unassumingly in a glass box with a placard that read, “s(he) be(lie)ve(d).” But after traversing the museum, I realized that the ideas these objects captured are universal. Everyone understands the feeling of wanting to change for someone else, or the heartbreak of unrequited love.

The anonymity of the pieces allows viewers to put themselves in the donor’s shoes. Moving from piece to piece, I felt my heart being broken and glued together again and again.

Hyde explains that the museum is curated to guide the viewer through an emotional journey. The entrance is lined with what Hyde refers to as “ice breakers,” which act as love letters that set the tone. From there, the museum broadens the traditional definition of relationship. A Peter Pan doll recounts how a man broke up with his younger, more immature self. A wardrobe donated by someone from Ireland explains how they were baptized as Christian but have broken up with their forced relationship with God. Turning the corner, the topics become heavier. A key chain bottle opener from a lover who died of AIDS and a dress from a teenage girl whose boyfriend committed suicide before he saw her in it, both reside along the walls. Nearing the exits are objects of hope and optimism looking back at past relationships with fondness and maturity. These pieces document that they survived their heartbreak, and you will too.

“You really leave with a sense of hope and levity. Time does heal all wounds,” Hyde said.

The experience of living the story behind each object is cathartic. I laughed, I cried, I gasped and I cringed. The courage of the donors and openness of the pieces inspire viewers to share their own stories. Tucked into the corner is a small confessional booth with a well-worn notebook filled with pages and pages of confessions, advice, doodles and replies. A small black pen encouraged me to add to it. According to Hyde, they’ve already gone through four notebooks in the few months the museum has been open. I add my own story of a relationship torn by distance and just like the hundreds before me, I finally move on.

Heartbreak is a universal experience that connects us across continents, languages and eras. Despite comments written in every language from Spanish to Mandarin to German, the sentiments behind them transcend language.

“Love is for suckers!” one anonymous guest writes.

Visit the museum with an open heart, mind and schedule, I spent a lot more time looking at the pieces than I anticipated I would. Hyde explains that even if you’re not initially drawn to the museum and its message, there’s still something beautiful to be gained.

“It’s really nice to know that all these times when you feel you’re the most alone and no one understands how you feel after a breakup or a broken relationship or a big decision, that you’re not alone.” Hyde said. “Everyone’s been through it so many times. And you’ll get through it too.”

The Museum of Broken Relationships is located at 6751 Hollywood Blvd, Los Angeles. Tickets are available at the door for $15 with the student discount.

Love a good breakup story? Email us at weekly@oxy.edu or tweet us @OxyWeekly.