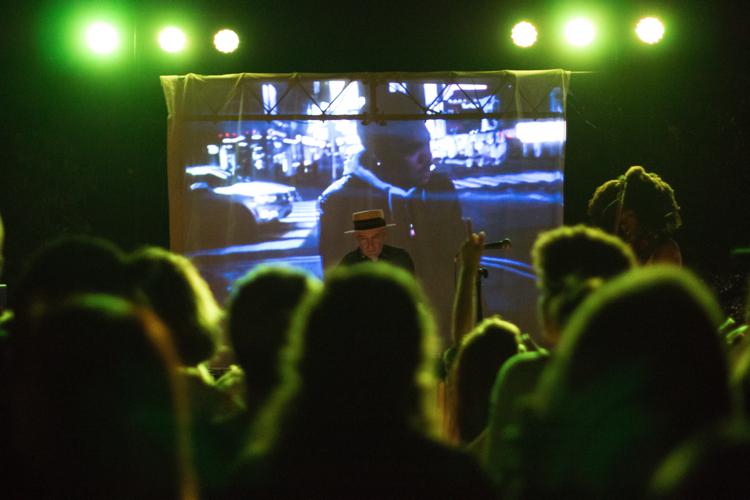 Sycamore Glen beamed with colorful lights, creating a club-like atmosphere that had everyone dancing. On stage, DJ Peanut Butter Wolf performed, accompanied by mixed media projections for KOXY Radio’s first live show of the year on Oct. 1 — and it was a banger.

Approximately 200 people attended, which Station managers Madison Rudd (senior) and Thomas Meador (senior) said is an excellent turnout for a KOXY performance. KOXY has a long history with Stones Throw Records, an independent music label based in Los Angeles, founded by Peanut Butter Wolf in 1996.

Peanut Butter Wolf has been DJing for nearly three decades, and is a prominent figure in music production. His collaborations range from names as notable as the Beastie Boys, and his audiences, as big-time as Bill Clinton. Rudd said Peanut Butter Wolf was a great fit for Occidental students because he incorporated a range of music from a live electric violin performance, to contemporary hits to old-school hip hop. This variety, combined with an engaging video playing on stage and flashing lights, created an appealing environment for attendees who danced, cheered and interacted with the performance.

“He had a very cool video projection and just a really professional set.” Rudd said. “It makes such a difference to have such a professional DJ, they really do know what they’re doing and I think students really noticed and enjoyed that.”

Meador went on to discuss the advantage and flexibility of having a DJ as opposed to a band, since they can observe the crowd and adjust their sets to meet the responses and energy of their audience. Rudd echoed Meador’s sentiments.

Occidental students and concert attendees Kate Zirulnik (junior) and Isaac Dalsheimer (junior) enjoyed the opportunity to dance and the concert as a whole.

“I felt those beats from my elbows to my toes,” said Dalsheimer.

Zirulnik expanded upon this praise, commending the versatile nature of the set.

“The DJ was dope and played some great songs from many decades. He threw in some Anderson Paak at the end which was cool since he just signed him to his label,” said Zirulnik.

KOXY has a history of producing and providing music for Occidental students, which it only plans to build on in the future. KOXY currently provides students with the opportunity to host their own online radio programming, and plans free live music shows and events to the Occidental community. Meadow summarized KOXY’s mission as providing a space that fosters creativity on campus, particularly for music.

KOXY began as an FM/AM station in the 1960s–70 but disbanded due to lack of popularity, but later reinvented itself as as an online music platform in 2000. Since its reincarnation, KOXY has developed a new voice on Occidental’s campus. Rudd spoke on the freedom that comes with being a relatively new student service on campus and how this allows them to adjust to the needs of Occidental students.

“We have the flexibility to change since we don’t have a 50 year history of doing something.” Rudd said. We can just change it if its not working or not worth spending the money on.”

This semester KOXY has over 90 students hosting radio shows, which run from 9 a.m. to midnight, Sunday to Friday and will be hosting additional events throughout the school year. A larger scale show will take place in November, with the headliners announced later this month. Rudd and Meador encourage everyone to check for news and to listen to student shows on the new KOXY website, and welcome all music lovers at KOXY events.

If Peanut Butter Wolf’s show was any indication of KOXY’s plans for this year, Occidental students should prepare for more dancing, more lights and more awesome music.