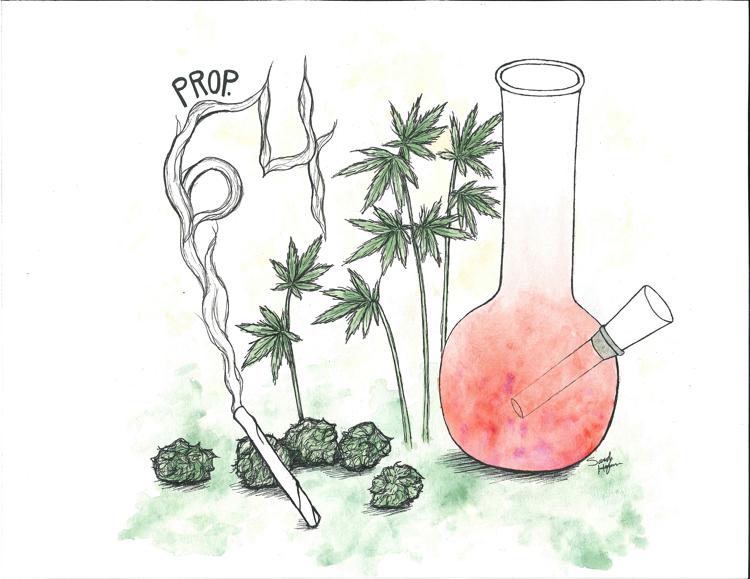 Not only is 2016 a historic election year, but it could also bring about many big transitions for the state of California. If Proposition 64 passes, California will be the fifth state to legalize recreational marijuana for adults over the age of 21. I plan to vote for Prop. 64 because it will raise the national standard for marijuana health protections immensely by facilitating scientific research and managing an often unregulated industry.

You don’t need to use drugs or even advocate drug use to see that our current drug laws on the state level are not working in favor of California’s health and safety. In my home state of Colorado, marijuana’s ubiquity has been dangerous. Red Rocks Amphitheatre, the place of some of my best memories, is also where I’ve witnessed parking lots lined with ambulances for high-schoolers who unknowingly smoked marijuana laced with heroin or meth, one of whom was my close friend. Since nearly 80 percent of 12th graders nationwide were exposed to marijuana just last year, the youth will often be the recipient of these damaging effects.

Since the 1996 Medical Marijuana Initiative, Los Angeles has struggled enormously to control the rising number of its dispensaries. After multiple failed attempts, the city passed Proposition D in 2013 and limited the number of dispensaries to 135, which meant only the 135 shops that were established by 2007 could stay open. However, one UCLA study found that 472 dispensaries were still in operation a year later, even though LAPD shut down nearly 500 in the same amount of time. That means nearly 70 percent of current dispensaries are unregulated — not only are they significantly more competitive, but they have no obligation to distribute marijuana responsibly.

Even regulated medical marijuana (MMJ) dispensaries are not entirely secure. In medical marijuana’s 20-year history in California, no one has officially created some form of medical guidelines for patients until just very recently. In 2015, Governor Jerry Brown signed the Medical Marijuana Regulation and Safety Act into effect, but actually determining how to implement the act in practice will be handled by a state agency in a process that will last at least until 2018. Furthermore, current laws allow legal dispensaries to completely avoid inspections by the department of Public Health, which can have disastrous effects on local communities. Another UCLA research study found that every additional dispensary within one square mile in LA county equated to a 6.8 percent increase in the amount of marijuana-induced hospitalizations. There are essentially no consumer protections from either the industry’s regulators or the industry itself.

Yet another important impact in states with some form of marijuana legalization is THC-impaired driving — the AAA Foundation for Highway Safety found that marijuana-related automobile deaths have doubled in the state of Washington since legalizing marijuana in 2012. Exactly half of the country has legalized medical marijuana (MMJ), and more than a dozen are taking legal action toward recreational legalization. Standards for THC driver impairment are not only non-existent but completely absent from the conversation. As a solution, Prop. 64 will devote $3 million annually to the California Highway Patrol so they can establish a procedure for managing THC-impaired driving.

Marijuana’s status as a Class I Controlled Substance dictates that it has a high potential for abuse, which means there are incredibly high standards for legally researching both positive and negative health effects, even though it is the most commonly used illicit drug in the country. Legalization could improve safety, enhance medical knowledge and redirect money to improve schools instead of lining drug dealers’ pockets. The federal government’s indecision to change marijuana’s drug status or prosecute state constitutions that have legalized recreational marijuana signifies that the responsibility to regulate the drug will ultimately fall on the state — and Prop. 64 is the best proposal that California has seen so far.

Visit here to find out more about Prop 64, and remember to vote by Nov. 8th.

Chris Peel is an undeclared sophomore. He can be reached at peel@oxy.edu.