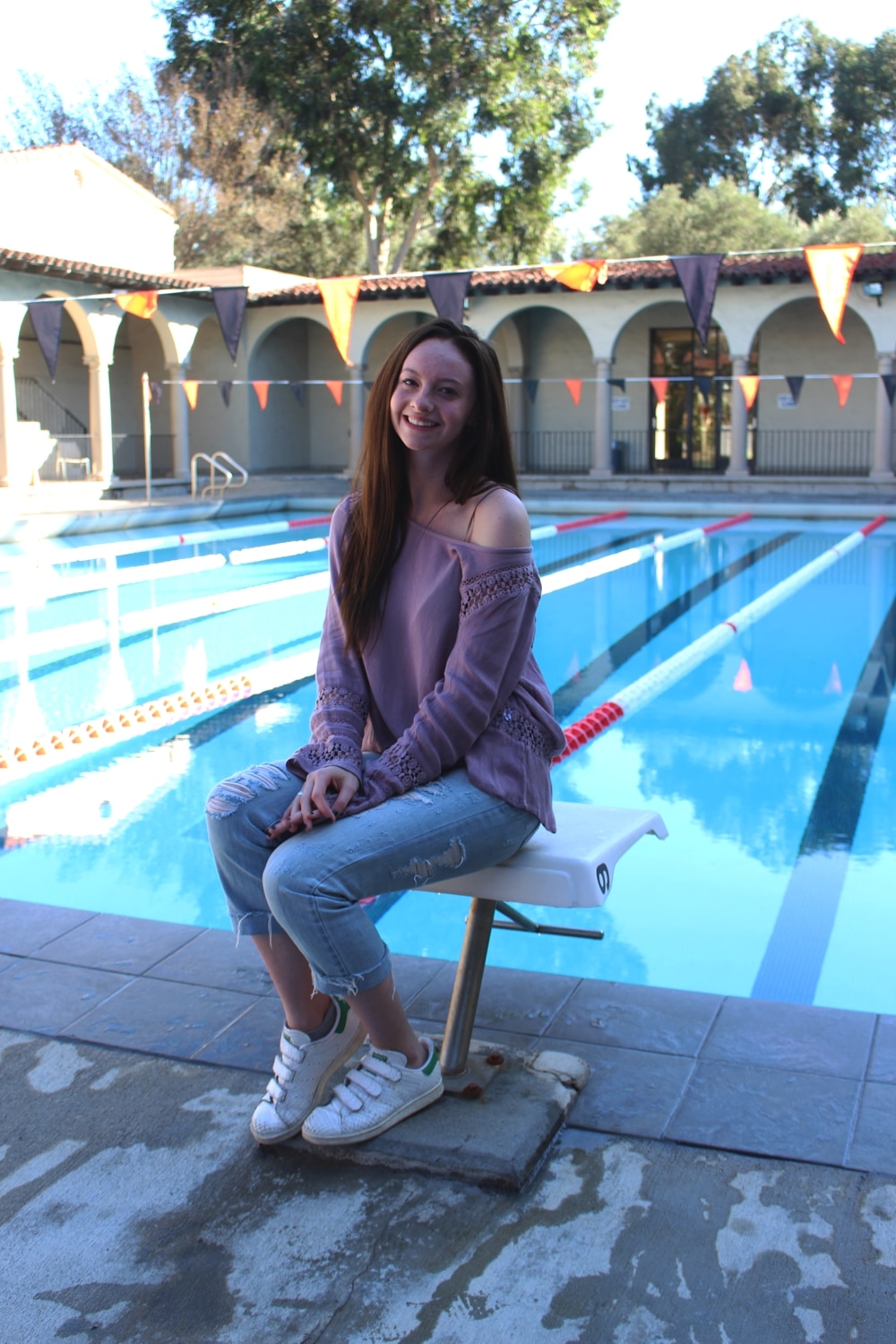 Steve Webb, head men’s and women’s swimming and diving coach at Occidental, explained how the records deserve extra plaudits as Taylor Pool which is known for being notoriously slow among more well-informed swimming fans.

“To break a school record in Taylor Pool’s pretty significant because it’s an old pool and not one of the faster pools in the conference,” Webb said. “It’s not the same depth throughout. The blocks are I don’t even know how old.”

First up for Thurber was the 100m record which she said, while unexpected, was in the back of her mind heading into the meet. Halfway through the race, it became clear to her teammates that breaking the record was a real possibility. One teammate, Aime Fukada (first year), described how she has grown especially close to Thurber during their first few months at Occidental and was particularly pleased to witness her achievement.

“It was so fun for me to watch her succeed after working so hard these last couple of months,” Fukada said. “I’m so proud of her.”

Thurber shared her shock at her own performance.

“I wasn’t planning on going in to break it, it kind of just happened,” Thurber said.

Thurber said that race boosted her confidence. She headed into her second race, the 200m backstroke, in good spirits and with no expectations for her lesser-favored race.

What followed was a grueling competition that resulted in Thurber recording a time of 2:08.09, eight seconds faster than the time for which Occidental recruited her. Coach Webb found the second swim even more impressive than the first.

“The 200 backstroke record was owned by one of the best swimmers of all time here in Caroline Chang,” Webb said. “She was an NCAA finalist and SCIAC swimmer of the year, so to break her school record is pretty cool.”

Webb said Thurber was a high-level recruit coming out of Kamiakin High School, Washington. According to Webb, in high school she was already a decorated swimmer: a state finalist, team M.V.P. and team captain. Thurber said that she took her time looking into a number of schools before deciding on Occidental.

“As I narrowed it down, I realized Oxy was the place I wanted to be, both academically and for swim,” Thurber said.

Webb said that he was very pleased to see Thurber join an already strong recruiting class this year. He has high expectations for the current first years to lead Occidental’s swimming team to new heights.

“She was definitely the backstroker we needed,” Webb said. “It’s exciting for the future to have a freshman that break school records and I think a few more could break records at the SCIAC championship meet.”

With Thurber excelling so early in her Occidental career, Webb shared his excitement regarding what she will be able to achieve in the future.

“She’s got a lot of things she could fix, so that’s what we’re excited about,” Webb said. “She’s barely tapping [into] her potential so it’s exciting to think forward to [the SCIAC championships] and then over the span of three more years after that.”

Thurber said that she agrees she has a lot more in store.

“I feel like I can definitely go faster,” Thurber said.