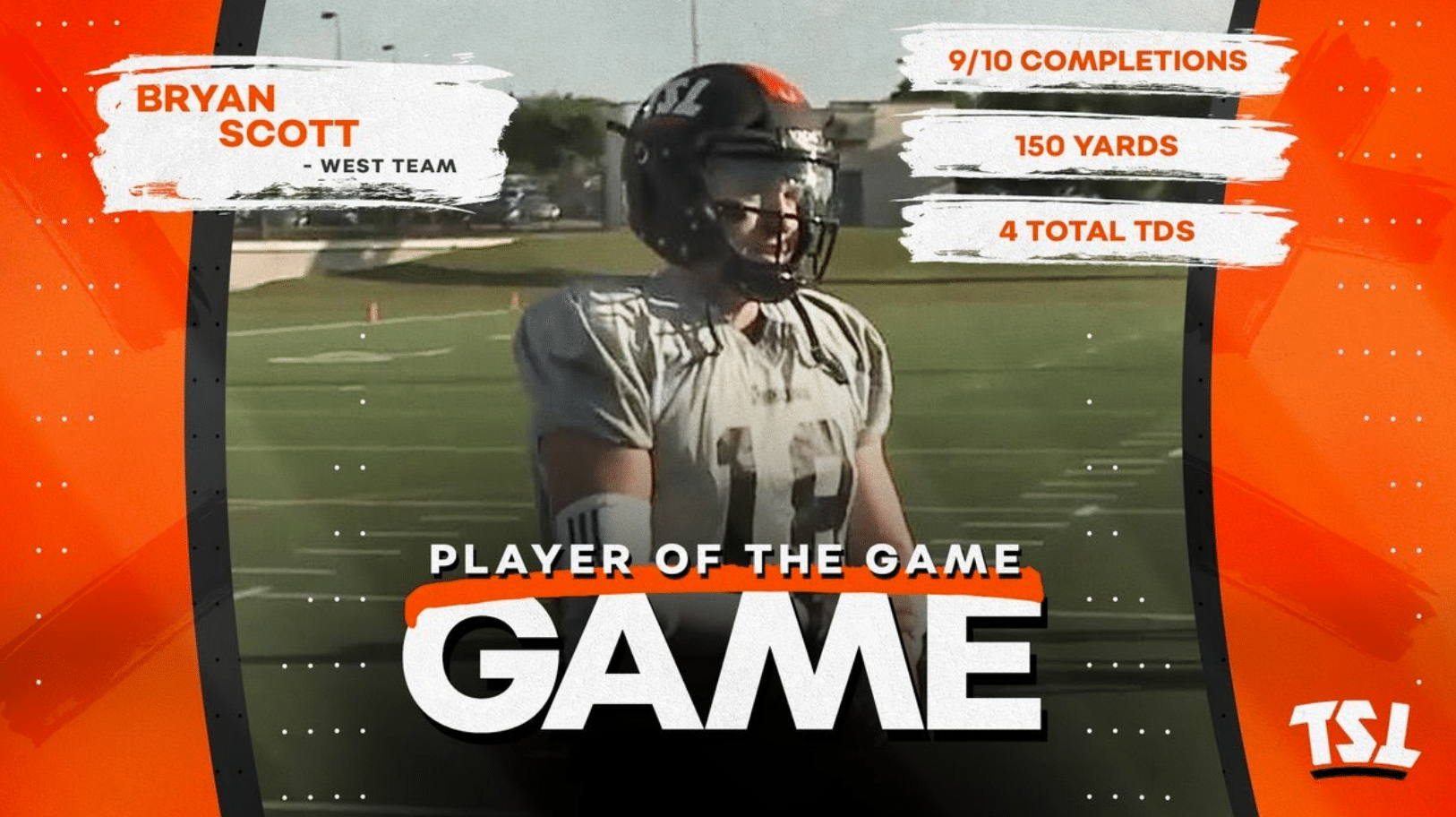 Former Occidental quarterback Bryan Scott ’16 continued to pursue his National Football League (NFL) ambitions at The Spring League, March 28–April 13. The Spring League is a developmental league and scouting event for prospective professional football talent. This year, the Spring League featured a number of high-profile names, including former Heisman trophy winner and former NFL player Johnny Manziel, but Scott more than held his own, gaining player of the game awards in each of his outings.

Scott finished his football career at Occidental with a host of Southern California Intercollegiate Athletic Conference (SCIAC) and Occidental records and accolades to his name, including SCIAC player of the year in 2016. From there, Scott began turning heads, and his performance at the 2017 USC Pro Day led to the Los Angeles Times picking up his story. This performance earned Scott another opportunity in the form of a spot in the Los Angeles Rams’ rookie minicamp. Once again, according to a second Los Angeles Times article, Scott made the most of the opportunity — while he didn’t manage to win a roster spot for the season, Scott explained how he learned a lot from the experience.

“(It) was great to be around coach McVay and the whole Rams’ organization,” Scott said. “To be able to go there and meet some of the guys and to see what the professional football life is all about, that was definitely awesome.”

From there, Scott said he continued training and looking for the next opportunity to showcase himself in front of NFL scouts. That opportunity came in the form of the Spring League, an intensive two-week stretch of football that saw Scott play in front of a host of NFL scouts who watched practices and games and interviewed the players. Scott said the experience was enjoyable.

“It’s been a really fun process and it’s been good to play with all these really special, talented players that come from all over the country and have been on multiple different NFL teams,” Scott said.

The league is separated into four separate regional rosters. Scott competed on the West team because he represented Occidental during college. The West team won both of their games with Scott and former Tennessee Titans starter Zach Mettenberger sharing responsibilities at quarterback.

Scott’s individual performances earned him player of the game recognition in both of these matchups. In the first game, Scott posted 121 yards as well as completing a touchdown pass to tight end Zach Sudfield.

The second game saw Scott face off against Manziel and his South team. After Manziel managed to put his team ahead, Scott exploded for four total touchdowns, (two passing and two rushing) whilst completing nine of his ten attempted passes as his team marched on to victory. Scott described what it was like being around Manziel, who, having been the twenty-second pick in the 2014 NFL draft, was the most talked about name attending this year’s spring league.

“He’s been really supportive and nice, and he’s been a good teammate,” Scott said. “It’s been fun to play against him and compete with him but also to see how he does things. I was in high school when he was doing his whole Heisman (trophy winning) campaign and so being on the field with him and all that is cool.”

Also playing with Scott in the Spring League was wide receiver Travis Harvey. Scott and Harvey first began training together following Scott’s senior season at Occidental, and the pair ended up being on the same roster during the Spring League. Harvey, who has spent time with the New York Giants, Arizona Cardinals and Buffalo Bills, described how he feels Scott will one day achieve his goal of securing a place on an NFL team.

“I think his chances are good because when he came to The Spring League, I’m pretty sure some the coaches and players didn’t really know who he was,” Harvey said. “Since he’s been here, he’s been one of the best quarterbacks here, and people are starting to respect him.”

The statistics support Harvey’s claim, as Scott led the Spring League in passing yards, touchdowns and completion percentage, bettering the likes of Manziel and Mettenberger.

Another member of the West team was linebacker Simon Poti, a fellow Californian who met Scott for the first time at the Spring League. He, too, liked Scott’s chances at an NFL career.

“The number one thing you have to do is be is ready to compete, and Bryan has that in him and he has that dog in him so I think that’s going to carry him and hopefully he makes an NFL roster,” Poti said.

Scott himself described how his performances in the Spring League, along with his time at the Rams’ training camp have shown him that he can be effective on an NFL team.

“Last year was cool to make it there,” Scott said. “Being there and then playing in this NFL spring league has given me the confidence that I can play at that level.”

Next up for Scott is a workout scheduled with the Kansas City Chiefs once he returns home.