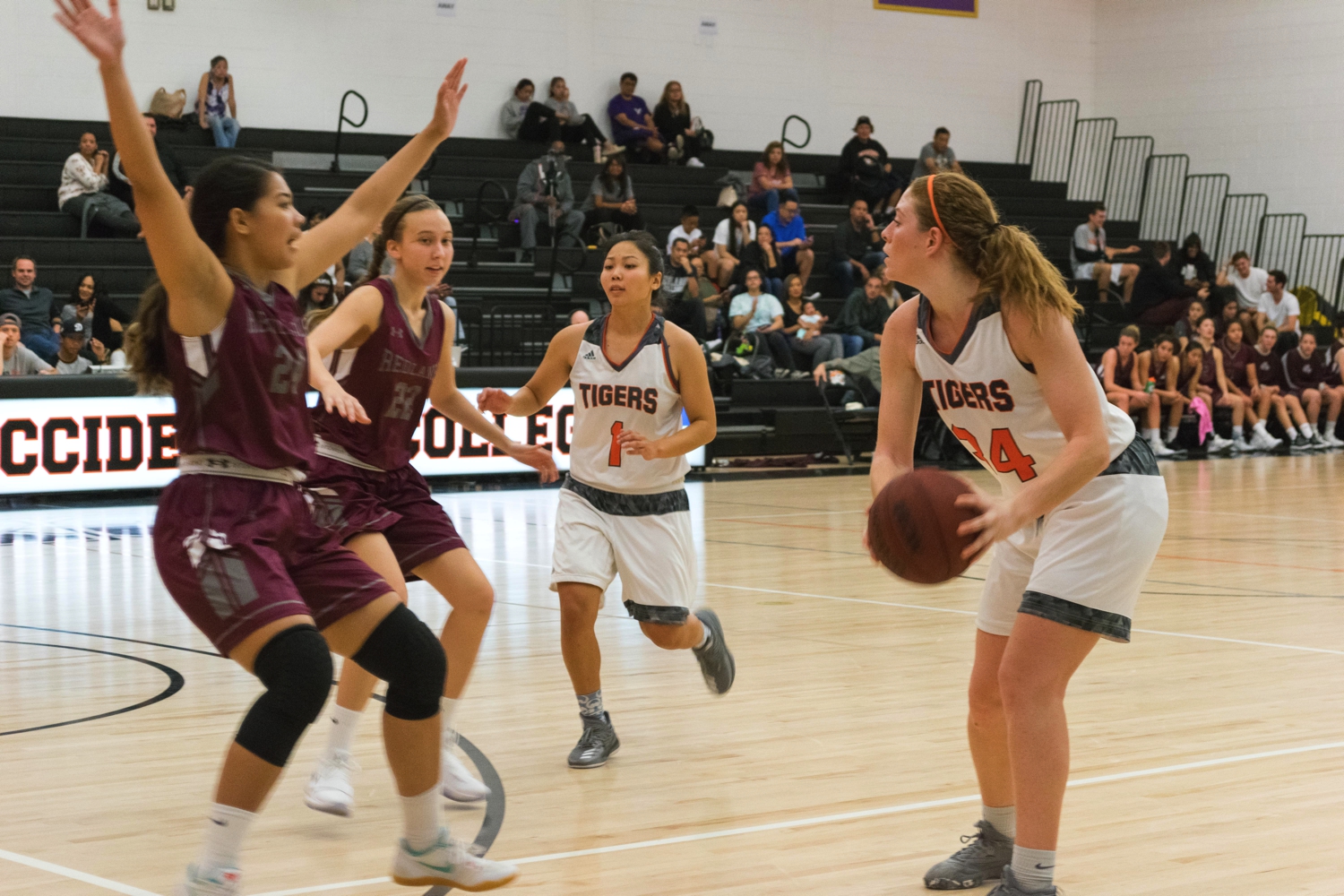 The Occidental women’s basketball team won a double-overtime thriller against the University of Redlands in Rush Gymnasium Saturday, Dec. 2, with a score of 71–69. This win brings the Tiger’s record to 4–1 overall and 1–0 in the Southern California Athletic Conference (SCIAC). Tala Ismail (sophomore), Alyssa Ramlochan (first year) and Shariah Green (sophomore) led the team’s performance in Saturday’s game while Emily Leonard (sophomore) scored an open layup as time expired to secure the victory.

Head coach Anahit Aladzhanyan attributed the team’s current winning record to an aggressive style of play, both offensively and defensively.

“We’ve looked pretty solid in transition,” Aladzhanyan said. “I like how assertive we’ve been on the open floor. We like to get out and run in transition; that’s one area that we work on every single day.”

The Tigers’ incessant pressure on both sides of the ball has translated to an average of 68.6 points per game, a 40.2 percent field goal percentage and an undefeated record at home.

According to Aladzhanyan, senior leadership coupled with young talent has many on the team hopeful for the rest of the season.

“It’s nice to have a senior group with experience and a younger group who are eager, talented and will contribute right away,” Aladzhanyan said.

Aladzhanyan said that the game against the Redlands served as a true test for the Tigers. Redlands has perennially been a team in contention to make SCIAC playoffs, according to Aladzhanyan.

According to the Occidental Athletics website, Green has led the Tigers with 14.8 points per game this season. Ismail has scored 14.4 points per game, while Triana Anderson (senior) has 12.5 points per game. According to Green and Anderson, they are excited about the team’s prospects for the rest of the season.

“I definitely would like to see us get into the conference tournament,” Green said. “I think in general just improving overall is a team goal that we have. Everyone is looking to fill a role and improve throughout the season.”

Coming up on her final season, Anderson is especially happy with the contribution of younger team members.

“I think we have a lot of talent on our team this year which is very exciting,” Anderson said. “I think we just need to work on our chemistry and growing as a team. We have a lot of potential, and I’m really excited to see where this team goes.”

Tigers are looking to make the leap into the SCIAC tournament, which has been dominated by a small group of top teams.

“You have four teams over the past six years who have been in the top four and have advanced to the conference tournament every year; those teams are Claremont, Chapman, Cal Lutheran and Redlands,” Aladzhanyan said. “Those four are pretty much powerhouses in our conference.”

According to Aladzhanyan, the team’s ability to limit and withstand scoring runs from their opponents has been key to their success. The coaching staff keeps record of “kills,” which are when either team scores on three or more consecutive possessions.

“One of the thing I like is our ability so far to control the momentum of games,” Aladzhanyan said. “We’ve done a decent job of being able to withstand huge runs.”

The next women’s basketball game will be Wednesday, Dec. 6, at California Lutheran University against the Regals.