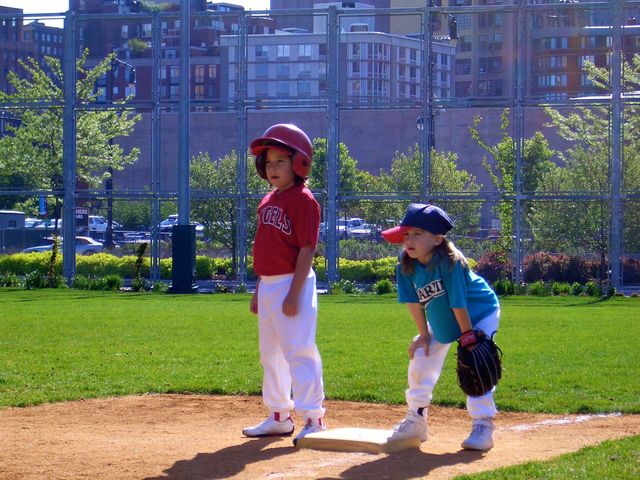 It was a rainy March morning when I tried out for the Downtown Little League majors team. My dad and I woke up extra early so we could make enough pancakes to fuel a big leaguer. I packed up my glove — all black with Derek Jeter’s name crossed out— my navy Downtown Little League baseball cap and made the trek to the Borough of Manhattan Community College.

As we walked into the gym, I was greeted with the sounds of balls slamming against aluminum bats and the deep shouts of male coaches in the distance. For the first time in my lifetime of playing sports, I noticed I was the only person in the gym with a blonde ponytail sticking out of her cap. I clenched my dad’s hand; he noticed too.

I could feel that my presence as a girl was not wanted. I had been playing baseball for years and, although many of my female peers had switched to softball, I had always been welcome to play baseball. But the majors were different. The majors were for the serious ballplayers, not for blonde girls with ponytails. My dad pushed me forward, and I hesitantly walked toward the group of 11-year-old boys who looked at me with confusion.

Although the boys and their fathers gawked at me when my name was called, the tryout ended up a success. I caught two out of the three fly balls hit my way and held my own in the batting cage. My dad grabbed my hand after the tryout was done. He already knew I had secured a spot on the Marlins, and he could not wait to tell his only daughter the good news.

My time on the Marlins was shorter than I expected. I thought I had a long road ahead of me playing baseball but my male counterparts thought differently. I thought I could handle the teasing about not wearing a cup, or about how my bangs inhibited me from seeing the ball, but the jokes became harder and harder to brush off. The supposedly harmless teasing steadily chipped away at my mental game and performance. Soon enough, when I struck out, it was because I was a girl, not because strikeouts are part of the game.

Despite being pushed out of baseball by immature boys and obstinate coaches, sports have shaped my experience as a woman. Sports have taught me about intersectional feminism, and how the lack of opportunities for women of color, trans women and intersex women in sports is egregious. Sports have taught me that it is okay to speak up and use my voice to advocate for what I believe in.

Playing sports has taught me more than I thought possible, yet my biggest takeaway has been to just keep swinging. I kept swinging after the catcher behind me yelled at me for “having a pussy.” I kept swinging when I was told by an opposing coach that I didn’t belong on the field, and I will continue to swing the next time my gender might cause others to think less of my athletic ability.

Shai Goodman is a sophomore sociology major and can be reached at goodmans@oxy.edu.