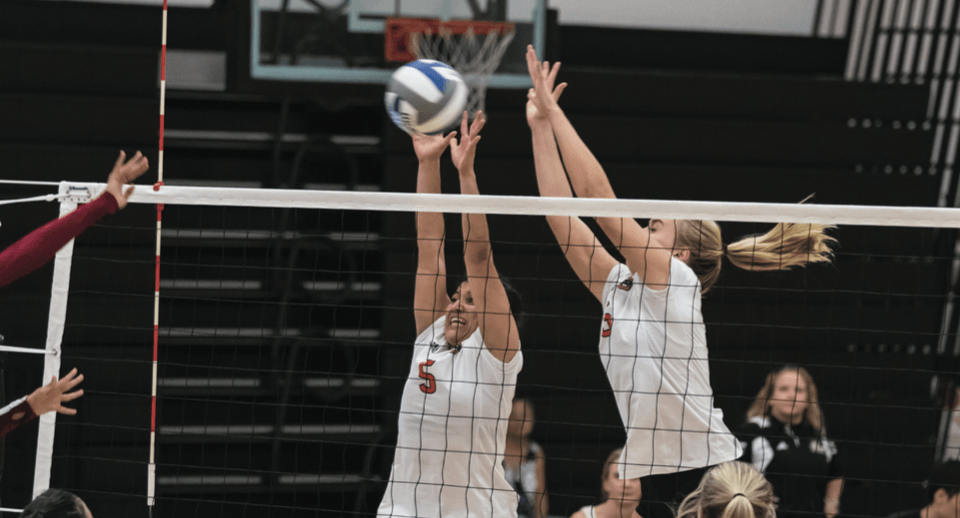 The Occidental volleyball team spent their last weekend of non-conference play in Colorado at the Colorado College Invitational Sept. 9 and 10. While the Tigers went winless in the tournament, the squad of 13 gained valuable experience and confidence from battling some of the top teams in the country. Colorado College ranks fifth in national coaches polls, while the University of Texas at Dallas also featured in the top 25.

Colorado native Claire Strohm (junior) felt that the the on-court chemistry and off-court moments that took place over the course of the trip helped unite the team.

Head Coach Heather Collins, now in her sixth year at the helm, emphasized the values of family and and the importance of spending time as a group on and off the court.

“It was great, it was a really great bonding experience for them,” Collins said. “We have emphasized this year that family comes first and that we are a family, and so I think that we had great opportunities to become closer…and that was wonderful.”

On the court, Strohm put together solid performances. She tallied five kills against Colorado College and another eight against the University of Texas at Dallas. The Tigers dominated the first set against the hosts, winning by a score of 25 to 12, but ultimately dropped the next three.

“We all came together and had this crazy energy and it was really fun,” Strohm said. “We played our best in that moment and I think it foreshadows what we hope to see this season.”

Herold and Strohm, both Colorado natives, hosted their teammates for lunch and dinner respectively. Strohm and her family hosted the team for dinner on the first night and Herold’s family served lunch at their house before the team traveled back to Eagle Rock.

Tiareh Cruz (senior) captured All-Tournament honors just a week after bringing home the same honors at the Pacific Coast Classic. When asked about Cruz’s consistency, Strohm had nothing but praise for her teammate.

“We’re all extremely proud of her because she’s a 5″4′ setter playing front row and blocking against these [tall] teams,” Strohm said. “She’s really the quarterback of this team.”

When asked about her individual performance, Cruz echoed the sentiment that bonding has been extremely beneficial so far this season. She mentioned the team’s ability to bounce back in the face of adversity and the common goals shared by each member and the coaching staff.

“What’s been really advantageous for us has been bonding as a team and having everyone buy in to the same type of goals,” Cruz said. “We were disappointed in the results, but we were confident that after the weekend was over … we’d work on things [we didn’t do well] and come on really strong for conference play.”

Though the Tigers went winless in Colorado, they faced nationally ranked opposition and were able to showcase talent that they hope will lead them into the SCIAC playoff picture. Three newcomers — Madison Mitchell (first year), Corrie McKee (first year) and transfer student Hannah Wagner (sophomore) — join a Tigers team that looks to build on a 9-15 record from last year. Wagner joins the squad after a season at NCAA Division I Lehigh University.

With one win and one loss in conference play, it remains to be seen how much of an impact the team’s bonding experience will have on the course of their season. After picking up their first conference win Sept. 17, the Tigers will look to make it two in a row against Claremont-Mudd-Scripps on Sept. 20.*

*Game in progress at the time of publication.