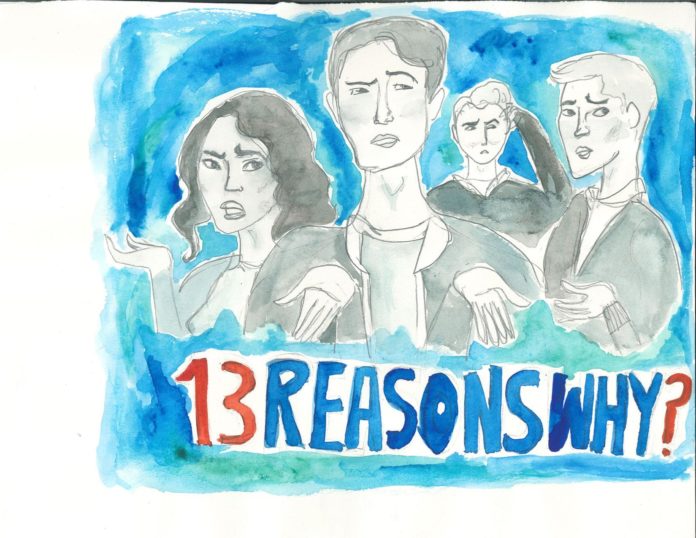 I was in high school when Netflix released the controversial series “13 Reasons Why.” Looking for volunteer work, I chose to volunteer for a crisis hotline, TEEN Line, where teens in need could chat with another teen rather than an adult professional. During training, I learned that TEEN Line had received an unusual influx of calls following the debut of the series, and many teens even cited the show as a reason for calling in.

The show “13 Reasons Why” recently deleted the graphic scene of a fictional 17-year-old girl, Hannah Baker, committing suicide. The re-editing of the scene had been called for by mental health professionals and critics, seeing as it could be triggering and unsuitable for the young audience attracted to the series. Despite ongoing outrage from viewers, it took two years for Netflix to finally remove the scene.

That’s right, editors of “13 Reasons Why” only sparked change after two years and the release of yet another controversial season — despite ongoing suicides and concerns raised by professionals. Any late deletion was not enough to atone for past mistakes. People were harmed both mentally and physically from watching “13 Reasons Why.”

The inclusion of Hannah taking her life and her parents shaking her lifeless body in a tub filled with blood was obscene. Notably, graphic suicide depictions can have a contagious effect, encouraging young people to replicate the represented behavior.

To the show’s credit, Mandy Teefy, the executive producer of “13 Reasons Why,” claimed the series was made with good intentions: it strived to depict the rawness of situations and also to begin a necessary dialogue. In the end, it abjectly missed the mark. Open dialogue need not happen at the expense of teens glamorizing suicide and copying Hannah’s methods for ending her life. Additionally, the series should not have showcased the aftermath of a death in a way that fed suicidal ideation fantasies by making it seem like suicide is an effective means for revenge and attention. It’s no coincidence that in the month following season one’s release, there was a 28.9 percent increase in suicide rates among U.S. kids.

The show has come under fire again with the release of their controversial third season. Despite the damage caused in season one, season two and three continue to ignore the real-world impact they may be inflicting on viewers. My biggest problem with season two was the unnecessarily graphic rape scene of school nerd Tyler. It appeared like the producers were more committed to shock value than conveying a message. The teenager was gang-raped by a mop in a much-too-long scene.

Meanwhile, 13 Reasons’ season three was even more audacious by not shying away from covering heavy public health topics, such as abortion and rape. The third season does a disservice to the topic of abortion by having a character, Chloe Rice, receive one and then not refer to the experience or any traumatizing aftereffects. Glossing over the trauma many women face after their abortion seems to convey an unnecessary, pro-choice argument which does not reflect the nuances of the controversy. It does not reflect the reality that most women experience — but it’s worth mentioning that the abortion scene has been highly praised by cast members since it depicts a taboo subject that many women go through.

Season three also spends a great deal of time humanizing a rapist, Bryce Walker. It spends more time on his storyline than those of many of his victims. It seems as if the series is trying to be an example of media coverage that is inconsiderate of its real-world impact. Before debuting the first season, producers had psychologist Dan Reidenberg preview everything for advice; he advised them to not air the series. Obviously, no one took his advice.

The depiction of suicide should occur in the media, but its portrayal needs to be careful — “13 Reasons Why” has never been careful. In the future, the media needs to seek the guidance of psychologists so that harm can be minimized. A media illustration of mental illness and sexual assault that was much more mindful was the movie “The Perks of Being a Wallflower.” That movie mastered the art of alluding to trauma without explicitly showing all the gory details. It is suggested but not directly revealed that the protagonist, Charlie, attempted suicide before the opening of the film and was sexually assaulted as a child.

Content creators must weigh the relative benefits and harm visuals will bring to viewers, because it’s possible to produce entertaining content without causing widespread detriment. It is for that reason that I’m through watching “13 Reasons Why” and support the lawsuits against it.

Angela Guglielmino is an undeclared first year. She can be reached at aguglielmino@oxy.edu.