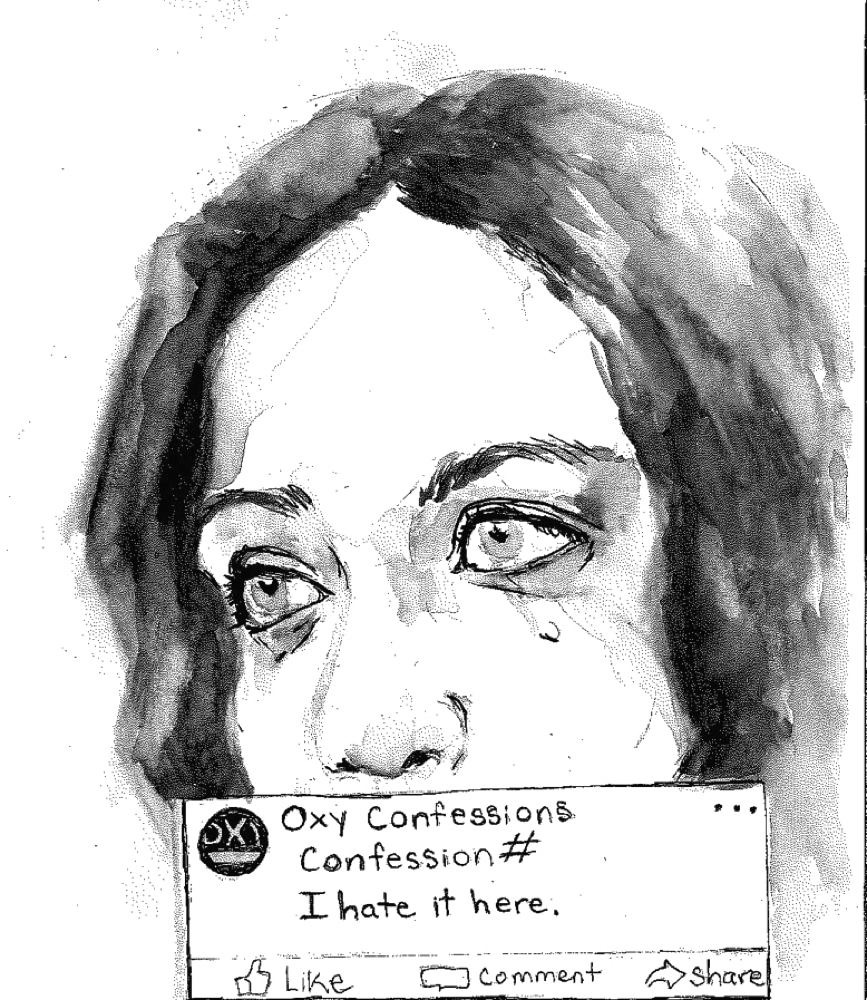 Oxy Confessions is tough to characterize. At first glance, the Facebook page looks something like a disjointed, anonymous group chat; nameless students wonder what classes they should take next semester, if they should make a move on that sexy senior and, apparently, how to get rid of the giant baby man that’s infiltrated their dorm room. (Finally, someone’s asking the important questions.) But it’s also quite common for students to take to Oxy Confessions to vent about the more serious aspects of their college lives, such as loneliness, stress and even mental illnesses like depression. While some might argue on the page that the Facebook forum is only appropriate for lighthearted fun, these darker confessions are far from harmful. In fact, they can provide students with a cathartic outlet for their feelings and even a risk-free way to reach out to the Occidental community for support.

Anonymously submitting a sad confession may seem like nothing but a shout into the void, but in fact, research from UCLA shows that simply putting a name to our feelings causes a reduced response in the amygdala and an increased response in the right ventrolateral prefrontal cortex. This reaction decreases stress and gives people a sense of control. And it doesn’t matter whether you’re venting to a friend, a journal or Oxy Confessions’ submission form — all that matters is that you’re vocalizing how you feel.

The anonymity of Oxy Confessions also helps people feel safer discussing their feelings than they would when talking to a friend, as seen in Confession #9288.

“I want to talk to somebody but I worry about driving them away,” the contributor wrote.

Although a post on a public forum is less intimate than a conversation with a friend, that doesn’t mean that these more serious Oxy Confessions can’t attract support. Posts about sadness and isolation often receive kind comments from other Occidental students, which include phrases such as “I know that feeling,” “I understand what you’re going through” and “Message me if you want to talk.” These comments offer the posters a low-pressure opportunity for conversation and even friendship. Even if a poster chooses to keep their identity anonymous, they have still gained the reassurance that members of their community care about them and that they aren’t alone in their struggles. Some comments on more serious posts also include suggestions for formal resources, such as Emmons Counseling or Project S.A.F.E., so that students who want professional guidance will know where to turn.

In a previous Occidental Weekly article, Elizabeth Brewer (first year) and Emma Pottenger (first year) argued that Oxy Confessions is not the place to debate sensitive issues, and I agree that an anonymous forum can’t foster a healthy, productive debate. Though that doesn’t mean that there can’t be any mention of serious topics on the page. In fact, Oxy Confessions’ only official description is completely devoid of rules — it just reads, “We all have secrets. Let them out. Anonymously.” And I believe that it’s the page’s lack of restriction that makes it so intriguing. When they have no rules to follow, people can post about serious topics without fear of being censored or silenced.

Some of the page’s readers might complain that even if sad confessions are technically allowed, they aren’t as entertaining to read as the more lighthearted posts are. It’s true that a post about struggling with stress might not be as uproariously funny as posts like Confession #9284, but we as humans are, on some level, fascinated by others’ pain. That sounds more cynical than it is — exposure to other people’s sadness causes us to imagine how it feels, increasing our empathy and helping us form bonds with one another. That means that whether you’re posting, commenting or simply reading the post as you scroll through your Facebook feed, you’re strengthening Occidental’s community in one small way or another.

Oxy Confessions is, of course, not a counseling service, and I am by no means suggesting that submitting a post about a personal problem is the best way to solve it. It is, however, important to understand the comfort that some students find in the page’s anonymity, and it’s certainly our responsibility to reach out to our classmates when we see them struggling with their mental health. College can be a mentally strenuous and often lonely environment, and even one kind comment can make a huge difference in someone’s life.