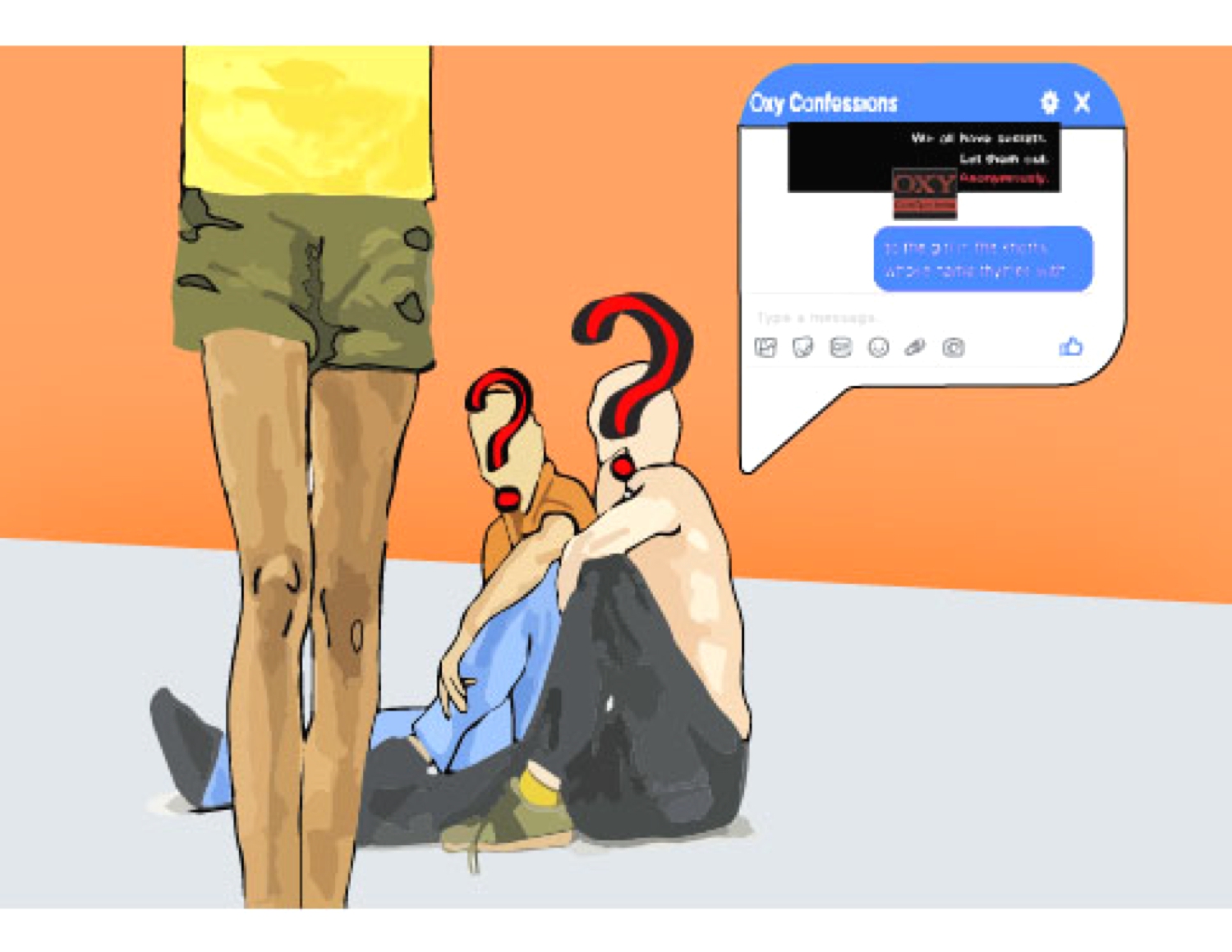 Today, college campuses remain pernicious cesspools for sexual predation. An estimated 23.4 percent of females, 21 percent of TGQN (transgender, gender queer and non-conforming) people and 5.4 percent of males experience some form sexual assault as an undergraduate according to the Rape, Abuse & Incest National Network (RAINN). In the midst of the #MeToo movement — which has reverberated throughout the nation, inspiring many to come forward and oust powerful abusers in entertainment and politics — it is important that we as a student body ask ourselves whether we are creating a culture conducive to preventing sexual violence. In many ways, the Oxy Confessions page on Facebook stands out as a glaring hypocrisy in our efforts to change the conversation on sexual assault. Oxy Confessions can no longer be a safe-haven for anonymous sexual fantasies about fellow community members.

As we have seen over the past couple of weeks with the reports about Kevin Spacey, Louis C.K., Al Franken, Charlie Rose and Roy Moore, it can even be the most respected and the most powerful among us who have committed the most egregious wrongs. In a similar sense, Oxy Confessions is a beloved part of the community. Unfortunately, the page’s contribution to a culture of sexual assault is subtle and hides in posts we see on a regular basis.

Take Confession 8636 as an example of a problematic post.

“To the girl with the brown curly hair who is always online shopping and drawing in my computer science class, I’ll let you draw me (in the NUDE)”

At first glance, this post doesn’t seem sinister — confessions like this are posted on a daily basis. However, the frequency of confessions like this one has desensitized us to their troubling undertones. Imagine that you’re the girl with the curly brown hair, going into your computer science class every day wondering who is watching you shop and draw, wondering who is having some sort of sexual fantasy about you as you sit in class, wondering as you leave the classroom when you will inevitably cross paths with this person again in our tiny community. These posts create a climate of uneasiness and insecurity.

Having an anonymous crush on someone is a common thing most people can admit to — anonymously posting explicit commentary about your crush, however, should neither be commonplace nor acceptable behavior. Oxy Confessions has become a space for anonymous online cat-calling.

The page has undergone a change this year in terms of its content; this is likely due to the fact that the page has a new administrator this year. While many confessions are still along the lines of lighthearted complaints about people peeing on toilet seats, confessions earlier in the year regarding ATO/OMA and sexual assault seem to reveal the new administrator’s idea of the page’s purpose. A platform to discuss serious issues is important and necessary, especially when discussing topics such as sexual assault. However, as has been previously pointed out in an article by Elizabeth Brewer and Emma Pottenger, due to its anonymity Oxy Confessions is not the platform to discuss serious issues. Oxy Confessions is also not the place where we should be normalizing and applauding anonymous sexual commentary.

Along with changes in the page’s administration, the transformation of Oxy Confessions seems to have marked a more general shift in social media. Sites like Facebook are moving into their adolescent stages and beginning to show the awkward, troubling effects of growing up. Launched in 2004 by Mark Zuckerberg, Facebook now boasts 1.37 billion daily active users according to its website, or roughly one-seventh of the human population. What was once a site to connect with friends is being co-opted by the powerful to disseminate falsehoods and sway elections. There is no denying the influence an online forum can have in a community.

To whoever is running Oxy Confessions, I implore you to make substantive changes to the way you operate. You must be more than a simple system operator — you must be a curator of content. Oxy Confessions should no longer be the forum where people feel safe sharing dark sexual fantasies about those with whom they share a community. The page cannot be a refuge for calling out fellow students under the cowardly mask of anonymity. The page cannot be a legitimate space to discuss real issues if it simply is not set up to be one.

The lasting effects of the #MeToo movement beyond Occidental remains to be seen. One can only hope it creates a cultural shift in the way sexual misconduct is viewed in the United States. As students, we will have to look back at this time and ask ourselves what we did to contribute to this national movement. A small step can be demanding change in the type of confessions that get posted on our favorite page. Time will tell if the curator of Oxy Confessions will join the movement as well.

Matthew Reagan is an undeclared first year. He can be reached at mreagan@oxy.edu.