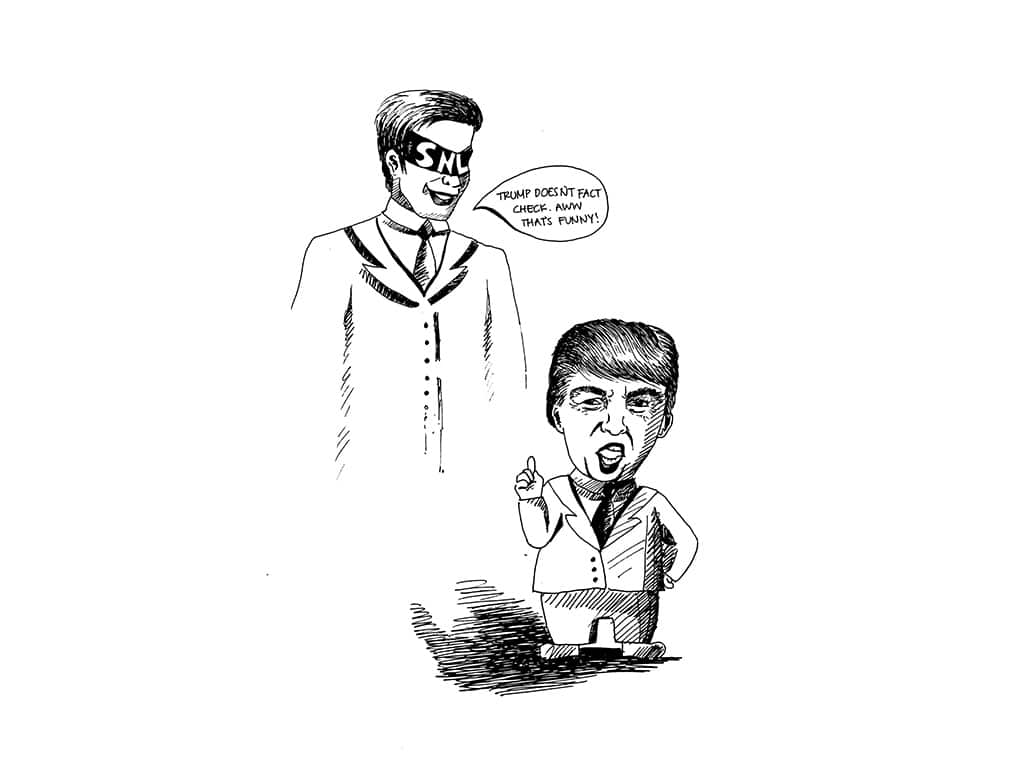 Watching Alec Baldwin look into the camera dressed as Donald Trump and announce, “live from New York, it’s Saturday Night!” is still unnerving. One minute, I’m watching a convincing reenactment of this week in the Trump administration, next I’m reminded that it’s a sketch comedy show. I’m laughing, but I don’t know if it’s at Baldwin’s outlandish portrayal of Trump, or at the outlandish thing that Trump actually did that week. Apparently, Saturday Night Live (SNL) doesn’t know either. The line between Trump the caricature and Trump the president is almost indistinguishable.

This poses a challenge for late-night comedians that satirize a man whose weekly outrages have made him immune to any parody. It’s like trying to satirize a monkey ramming its head repeatedly into a wall — nothing will ever be funnier than the actual event.

Capitalizing on Baldwin’s uncanny portrayal of Trump, SNL’s method of political satire is to replay Trump’s antics and call it a comedy. But by conflating our reality with a comedy sketch, SNL instead normalizes Trump’s absurdity rather than critiquing it. Their writing is not just lazy, it’s actively harmful.

Baldwin describes SNL’s political satire as a call-and-response between the executive branch and the show where they’re “just repeating back what he says.” SNL waits for Trump to write his own material and then parrots it back to him.

In the opening skit of SNL’s 43rd season Sept. 30, Baldwin tackled Trump’s pathetic response to Puerto Rico’s need for aid after Hurricane Maria. He called San Juan Mayor Carmen Yulín Cruz (played by Melissa Villaseñor) explaining that “we want to help you, but we have to take care of America first.” With references to “Despacito” and “FEMA Prime” (a riff on Amazon Prime), the sketch had the potential of being funny if the audience ignored the fact that it spoofed a real situation with real people dying.

With their repetitive spotlighting of Trump’s shenanigans, SNL is pandering to Trump’s need for attention and instead gives him the power to shape the narrative in his favor. In the midst of the Republican debate season, on Nov. 7, 2015, Trump actually hosted SNL, of which Taran Killam — who played Trump on SNL prior to Baldwin — said in 2017 that it didn’t help him become president but “normalizes him and it makes it okay for him to be part of the conversation.” The more exposure we have to Trump in these comedic settings, the less seriously we take his words and actions as president.

Baldwin himself voiced concerns that his routine impersonation of Trump would make the president “too cuddly.” After Baldwin, Melissa McCarthy’s parody of former White House Press-Secretary Sean Spicer was the most popular cameo of the season. But rather than McCarthy’s routine lampooning of Spicer, it made him a household name, palatable enough to garner a surprise cameo at the 2017 Emmys. He parodied his lie about the size of Trump’s inauguration audience, saying that “this will be the largest audience to witness an Emmys, period, both in person and around the world.” It was too soon to go from laughing at Spicer to laughing with him.

Afterwards, Spicer’s Q ratings soared, elevating him to the status of a celebrity. It didn’t matter that people were saying good or bad things about him, all that mattered was that people were talking and paying attention.

From the 2016 presidential debates to the beginning of Trump’s presidency, season 42 of SNL rose to be its most-viewed season in 23 years coupled with a record-breaking 22 Emmy nominations. People can’t seem to get enough of Trump. Former SNL writer Tim Herlihy explained that “if they did a Trump-less show, people would go bananas. That’s a lot of pressure to have [political material].” People are tuning in for their weekly dose of cathartic laughter and to find the humor in dark times. The jokes about Trump and his administration are then necessary and unavoidable. Baldwin’s Trump impersonation, especially when played with little exaggeration, reminds us that this is not normal.

If SNL wanted to lead a comedy revolution against Trump, they’d have to ignore him altogether. Maybe the monkey would stop ramming its head into a wall if no one was watching, but we all know that we can’t turn our eyes away. While Baldwin’s take on Puerto Rico fell flat, SNL cast member Michael Che responded with righteous anger saying to Trump, “this isn’t that complicated, man. It’s hurricane relief. These people need help. You just did this for white people twice. Do the same thing.” SNL could learn from their own segment, Weekend Update. Comedians who are working to dismantle Trump’s reputation are not bandwagoning off his outrage and sinking to his level, but asking viewers to take a step back and think critically about his rhetoric.

Kristine White is an undeclared sophomore. She can be reached at kwhite2@oxy.edu.