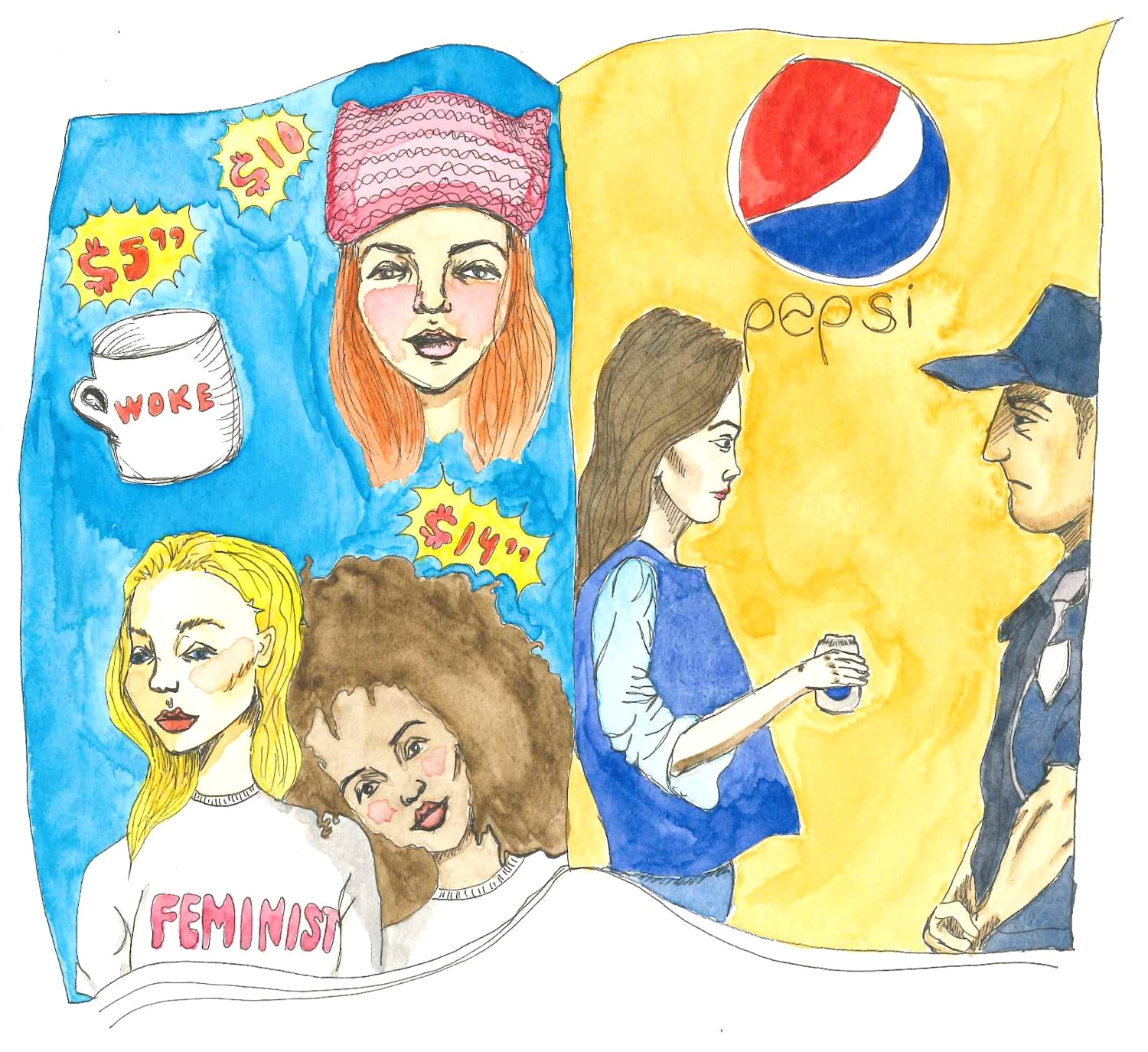 A few weeks ago on Saturday Night Live, Ryan Gosling and the usual cast poked fun at millennial consumerism’s obsession with appearing socially conscious. They aired a spoof advertisement of “Levi’s ‘Wokes,'” a gender-, size- and color-neutral pair of (honestly hideous) pants catered to the masses. While the skit veered slightly too far toward actually criticizing inclusive language for my taste, it hit the nail on the head when it comes to our culture’s sudden focus on staying woke — and some of the ulterior motives for doing so.

From Kendall Jenner’s infamous Pepsi commercial to $30 “The Future is Female” t-shirts (and hopefully we all know why this is an outdated slogan in 2017 anyway), the framework of social justice has been co-opted by big advertising and independent Etsy shops alike, making it easier than ever to buy an outward display of progressive politics. And while it’s great that narratives of resistance are being elevated to the mainstream, we must be critical as to whether or not this translates into meaningful activist practice. I argue that it doesn’t.

I am in no way exempting myself from this phenomenon. As I write this, I’m wearing earrings shaped like boobs that I spent far too much money on, and my targeted Facebook ads are often plastered with images of waifish models wearing shirts with slogans like “Sleep tight, but stay woke” — whatever that means. We have all, whether we meant to or not, become complicit in the commodification of social justice and its rhetoric.

Another caveat to this critique is that I don’t think outwardly expressing your politics through fashion or art is a bad thing — if it were, we wouldn’t have, well, fashion or art. But when social movements are spread to the masses vis-à-vis corporate consumerism (the only way our culture knows how, it seems), the authenticity behind the glittery “smash the patriarchy” iPhone cases and Che Guevara t-shirts becomes pretty questionable, as do the items themselves, which become “gift-shop platitude[s] … far removed from [their] revolutionary roots,” as one author wrote.

Among celebrities, politicians and students alike, living in 2017 means that being well-versed in the language of social justice is both key to being socially accepted in many circles and essential for maintaining this social capital among acquaintances; our outward displays of wokeness — be they through social media, t-shirt slogans or actual activism — make this clear. But the ease of participation afforded by commodified wokeness brings with it the danger of dilution. If everyone’s talking about defending DACA or #BlackLivesMatter or (please God no) “pizza rolls, not gender roles,” but no one’s actually doing anything, a bystander effect of sorts occurs.

Rawiya Kameir points this out in a 2015 article for The FADER:

“It’s easier than ever to say the right things and loudly criticize people who don’t, to the point where conversations about social justice have been co-opted by people who aren’t directly affected or for whom arriving at a true solution isn’t particularly urgent,” she wrote.

It’s one thing for people who are not directly affected by injustices to attend protests, contact legislators or give money to grassroots organizations and bail funds — that’s called allyship, and when done right, it’s important and impactful. There is nothing radical, however, about spending $16.99 on a onesie for your baby that reads, “I May Take Naps But I Stay Woke” (you can’t make this stuff up).

But while I blame consumers for falling prey to this particularly insidious kind of slacktivism, they’re only buying because someone is selling — from Lyft riding on the coattails of Uber’s Trump connection/general shadiness to Brawny paper towels proclaiming that “Strength Has No Gender,” corporations have figured out that the revolution is profitable. Capitalism has sucked up the interests of its self-proclaimed opposition to become a “provider of lifestyle accoutrements.” As for whether or not we’d be better off with a corporate sector that remained silent all together on social issues rather than profiting off them, I’m not sure.

The bottom line here: meaningful understandings of social justice? Good. Their capitalist cooptations? Bad. And while some would argue that we shouldn’t complain if it means that this language is now just as readily accessible to 14 year-olds in Oklahoma as it is to Californian college students, we must be aware that watered-down activism can cause more harm than we may be willing to admit.

Charlotte Umanoff is a Senior Politics major. She can be reached at umanoff@oxy.edu.