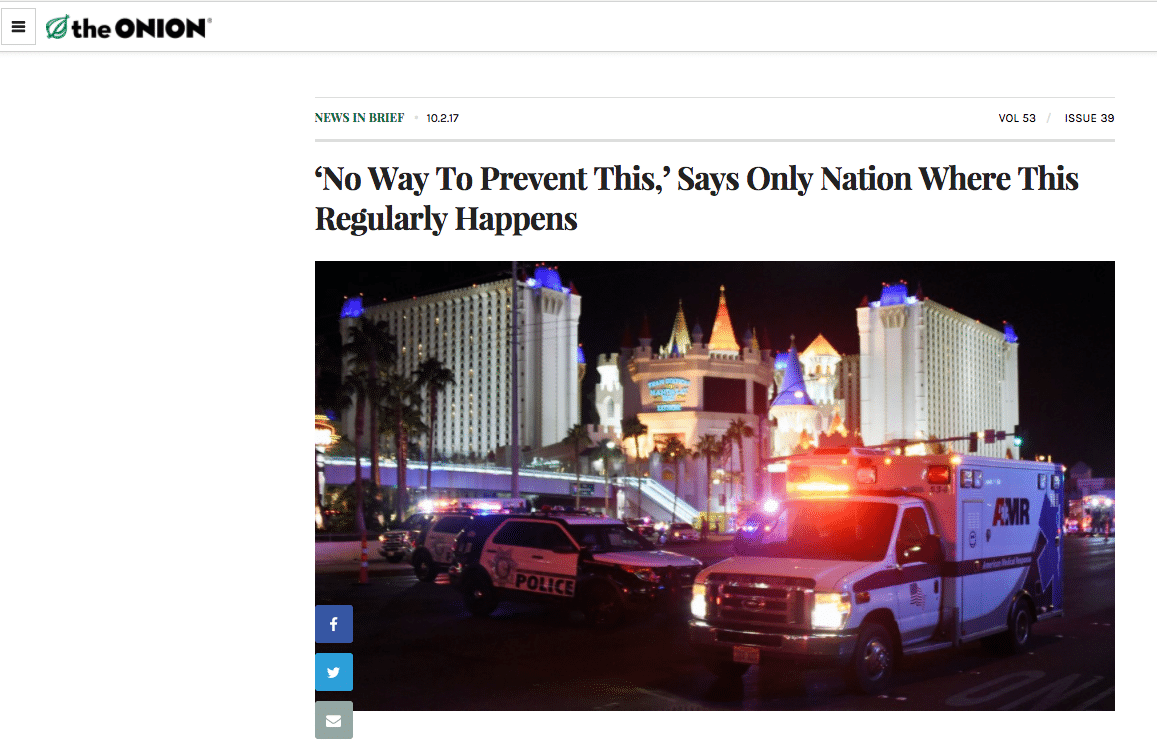 When I moved to the United States from Canada at eight years old, I was already aware of America’s sordid gun culture and the violence that it brought. I recognized it as the unspoken price of living in this country.

Growing up in a military family, guns became a normal part of my everyday life. Over time, I lost my original fear of them. But as a nation, we’ve grown numb to the daily gun massacres and injuries. On average there is more than one mass shooting in America per day. The worst mass shooting in U.S. history happened on Oct.1 in Las Vegas. After each tragedy, following a script, we regurgitate the same gun-control stances, then move on with our lives. We should never accept the deaths of 58 people and 489 injured as commonplace.

In my life, gun violence has become a terrible reoccurring joke. On Oct. 15, 2015, one of my close friends was shot and murdered. I remember pushing back tears and skipping her funeral because I had a play to direct — ironically a fun upbeat comedy. Later that school year, there were three separate occasions where my high school had to lock down due to reports of an active shooter on campus. The summer after I graduated, a house party attended by my classmates in Mukilteo, Wash. turned deadly when a teen took his newly purchased rifle and shot four partygoers, killing three.

Despite living through the aftermath of gun violence, I’m still desensitized. During the first lockdown, my classmates and I huddled in the corner of my government classroom in fear for hours. Meanwhile, I opened up my textbook and started to read, thinking how funny it would be if I died while reading about the Second Amendment. My cousins in Canada were appalled that I talked so lightly about everything. Somehow I felt empty inside and making jokes was the only way to keep sane. This was my new normal.

Media platforms followed the cathartic comedy route. Following the Las Vegas shooting, the satirical website, The Onion, published a painfully familiar article for the fifth time since May 2014 when a gunman went on a violent rampage in Isla Vista, Calif. The Onion changed the names and numbers to reflect Las Vegas, but the rest of the article remained disturbingly formulaic: “‘No Way to Prevent This,’ Says Only Nation Where This Regularly Happens.'”

With each reposting, the satirical piece loses its comedic edge and becomes more of a desperate plea for help. Yet the satire continues to go over the heads of many members of the public and Congress. This will not be the last time The Onion will run the headline, either, because “sometimes these things just happen and there’s nothing anyone can do to stop them.”

We’ve come to think of acts of gun violence like changes in the weather — they’re out of our control. Congress thinks it has already done all it can — they held moments of silence, lowered flags and then tweeted their thoughts and prayers. Kentucky Governor Matt Bevin tweeted that “you can’t regulate evil.” By law, I can’t purchase more than two 20-dose boxes of Sudafed in a month, but like Stephen Paddock, I can legally purchase 33 guns within a year.

There is truth to my cynicism as Congress actually can’t pass any gun control legislation. Since 1996, the infamous Dickey Amendment has prevented the Centers for Disease Control (CDC) and Prevention from researching the obvious relationship between gun violence and public health. The amendment is so absurd that its sponsor, Rep. Jay Dickey, R-Ark., eventually opposed it. It’s no surprise what we’ll find if the CDC were allowed to research firearm injuries and deaths: guns kill, a lot.

Ignore for a moment the headline-inducing mass shootings and think instead to the terrifyingly common everyday tragedies of accidental gun deaths. On Sept. 21, in Tampa, Fla., a 4-year-old girl died after accidentally pulling the trigger of a gun she found while looking for candy in her grandmother’s purse. Then, on Sept. 24 in St. Louis, Mo., while playing with a gun, a 2-year-old boy accidentally killed his sleeping father. Incidents like these are the real face of gun violence in America.

Nothing will change after Las Vegas unless we stop detaching ourselves from the issue. But if it takes a personal tragedy (like mine) for each person to realize this, then massacres like Las Vegas will continue to cycle through the news routinely. We’ll click the next article and then collectively forget until the next tragedy reminds us that this could happen anywhere, anytime, to anyone.

Kristine White is an undeclared sophomore. She can be reached at kwhite2@oxy.edu