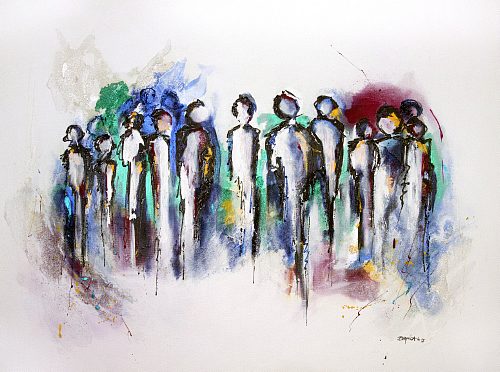 When a situation bigger than ourselves and our insular worlds is so wretched that to fully comprehend it would be emotionally shattering, humans like to turn the other way. It is evolution: We prioritize self-preservation. It is why we would rather look at memes than pictures taken post-drone strike in Aleppo. In 2016, the American election joined the list of wretched sights to behold and I succumbed to the temptation of apathy. In fact, until recently, I had become so indifferent to this particular presidential race that I didn’t even realize I was indifferent; my brain had turned off, tuned out, changed the channel.

When I watched the Access Hollywood clip a couple weeks back of Donald Drumpf and Billy Bush playing self-serving ping pong with sexist anecdotes, I felt nothing. I wasn’t shocked: inevitably Drumpf would speak in such a way. I wasn’t angry or even offended.

At one point, Drumpf’s rhetoric had evoked an emotional response from me: I was sickened by his proposition to ban all Muslims from entering the United States, disgusted at his mocking of a disabled reporter. I was transfixed on the primaries, in a perpetual state of disbelief. Drumpf’s rebranding of the U.S. election into America’s worst reality TV show was still a work in progress; his insertion of explicit and shameless racism, xenophobia and sexism into presidential discourse was still a new sour taste on my lips.

But I have been force fed this rhetoric so relentlessly that at some point I detached myself from the emotional implications, my subconscious rallying against being caught up in the vicious cycle of wondering why the world is falling apart. I plead guilty on all accounts of self-desensitization: I watched the Republican nominee for President of the United States boast about sexually assaulting women and I felt nothing.

But then I saw a clip of Michelle Obama taking on Drumpf’s misogynistic remarks. I quickly opened up a new tab on YouTube, found the entire speech and watched silently. It took 26 minutes and 27 seconds for the first lady to make me emotionally available again. Through a piece of speechmaking that can only be described as a hybrid between soothing spoken word poetry and a beseeching battle cry, Michelle reminds us that it is impossible to attempt to separate politics from the self. She makes her political point — that Drumpf’s comments are beyond despicable and have no place in our society — through a deeply personal speech. When Michelle says, “Maybe we’re too afraid to be that vulnerable. Maybe we’ve grown accustomed to swallowing these emotions and staying quiet, because we’ve seen that people too often won’t take our word over his,” Drumpf’s remarks begin to take on an immensely personal quality, as relevant to the rape victims who no one will believe as they are to the girl at high school too timid to argue with her male peers in class because she knows they will shout louder and longer.

When Michelle describes the type of everyday intimidation all girls are accustomed to, “It’s like that sick, sinking feeling you get when you’re walking down the street minding your own business and some guy yells out vulgar words about your body,” Drumpf’s remarks become explicitly universal: embodying all our anxieties and insecurities. So later when Michelle says, “We cannot allow ourselves to be so disgusted that we just shut off the TV and walk away,” I know that next time I will not.

Having the ability to disconnect the personal from the political is an illusion. It is inexorable that our lives and consequently our identities will be informed by our cultural surroundings. I had tuned out Drumpf but I will never be able to tune out daily sexism. On the most selfish level — disregarding the basic fundamental moral obligation as humans to stand up for others — we should care about politics because it will affect our sense of self, whether we like it or not. In order to take control of our identities, our own narratives, we must counter the ways in which hateful political discourse defines us. Drumpf depicts anyone of Mexican ancestry as a gang-raping coke dealer sponging off the welfare state. Drumpf paints all Muslims walking down the street with a bomb in their backpack, chopping off heads in their pastime. As I am a woman, according to Drumpf my sole purpose is making men happy through simply being aesthetically pleasing and sexually gratifying.

In such a frightening, nonsensical and dejected political climate, it is so tempting to turn away. But by doing so, we give Drumpf the freedom to define us how he sees fit. Staying engaged means coming face-to-face with these definitions, addressing the worst assumptions people have ever made about us. But it also means turning those prejudices on their heads, doing our individual personalities justice by redefining ourselves. It is a tough process but an empowering one. By advocating in whatever way works for us — campaigning, voting, engaging in political discourse, sharing an article on social media, whatever — we are countering Drumpf and his bigotry.

In October 2016, political participation is painful but the alternative is unthinkable. As Michelle says, “we cannot afford to be tired or turned off.” We are millennials so we inevitably hate labels and marginalization. Let’s translate this into political action. In short, let’s vote against Drumpf Nov. 8 by ticking the box next to his only feasible opponent.

Leah Gavron is an English Literature major, on exchange from the University of Sussex. She can be reached at lgavron@oxy.edu