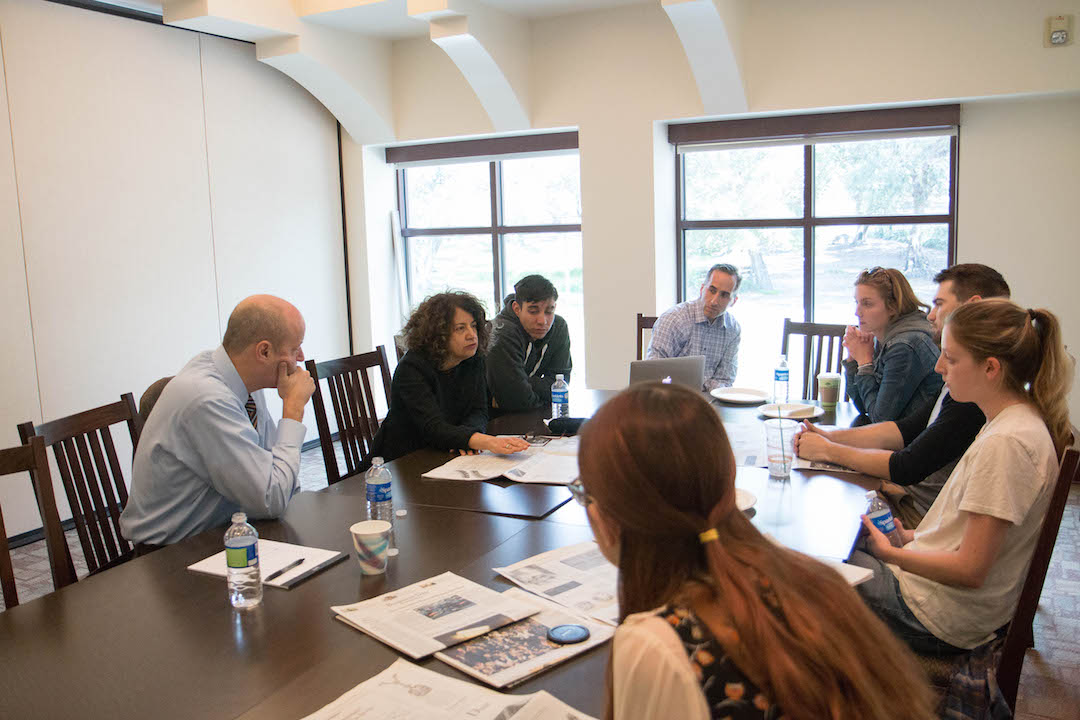 President Jonathan Veitch brought The New York Times subscription to Occidental’s campus in one of his first initiatives as the college’s President in 2011. Six years later, he returned to the second most-trusted newspaper in the country, this time to confront the evolving political landscape of the United States. Veitch led a roundtable current events discussion Feb. 28 with six students and Barbara Thomas, former Los Angeles Times Executive News Editor and current faculty advisor to The Occidental Weekly. Open to all students, the discussions will take place every Tuesday at noon in the Johnson Student Center’s Bengal Room. The discussions are also an effort to create more channels of interaction between the President and students.

Participants were told to read an article from The New York Times in advance and then bring a copy for a critical, informal conversation. Veitch aims to debate the relevant issues and the way The New York Times covers them so that participants can collectively inform and challenge one another on current events. Veitch explained that there are profound changes occurring nationwide, and in order for anyone to comprehend how they may be affected, they must learn to read the news with scrutiny.

“I am not interested in determining what people say or think,” Veitch said. “If students want to live within an echo chamber, that is up to them, but I want to create circumstances in which they can complicate their thinking.”

Whether it is due to the restructuring of post-World War II alliances or the way politicians conceptualize immigration, Veitch believes the world is in a rare moment of complete transformation and that it is important for students to understand those changes as they happen. While he acknowledges the decline of print journalism, he argues it is still an useful medium for discussion.

“If you have a filter on the news you are interested in, you are only going to get that,” Veitch said. “One of the great strengths of a newspaper is that it forces you to encounter other things than what you think you are looking for.”

Veitch explained that a liberal arts education must ultimately engage students with the socio-political space they inhabit, which he hopes to accomplish by creating transparent, deliberative discussions where all political views are accepted.

Participants will also be joined by Thomas. She supports the roundtable discussion format because she views journalism as the first draft of history. Thomas echoed Veitch’s emphasis on learning to evaluate and critique the news.

“In my day, we knew that when we picked up the paper we were getting legitimate news,” Thomas said. “You [students] are in the odd position of having to decide what is real and what is not real, and a lot of what we see only validates what we think we already know. News is not supposed to do that.”

“I want to know that what I am reading is truthful, that it accurately portrays what is going on,” Chu said.

She expects Veitch’s roundtable will foster good conversations and critical thinking and is open to participating if she hears that the dialogues are productive.

Claire Taghiof (first year) disagreed. She does not plan on attending the roundtable sessions, and she only reads about news that affects her.

“I read the news that is relevant to me,” Taghiof said. “If it is something regarding Iranian-U.S. relations, I will read that since I am Iranian. That is pretty much it. Whatever else happens probably will not affect me that much.”

Whether or not she reads it herself, Taghiof acknowledged the value of quality journalism.

“I feel like everyone should have the same access to correct news because that is important to make proper decisions,” Taghiof said.

Veitch selected The New York Times to serve as the centerpiece of discussion mainly because it is already available to students on campus. His office originally funded the subscription for students, but recently the Associated Students of Occidental College became responsible for funding and now distributes New York Times copies at three campus locations every day — but even without the campus-wide subscription, The New York Times still would have been a likely final choice for the roundtable.

“It’s the newspaper of record,” Veitch said. “It’s one of the few papers that’s managed to hold on to the highest journalistic standards. The New York Times is what seems to me to be the most thoughtful newspaper.”

Jaydon Levitt (first year) relies on a variety of sources for his news, including The Washington Post, The Wall Street Journal and The New York Times.

“It is not an understatement to say that media is the fourth pillar of government,” Levitt said. “It is how people get information, and if that information is not correct then people can make unwise decisions.”