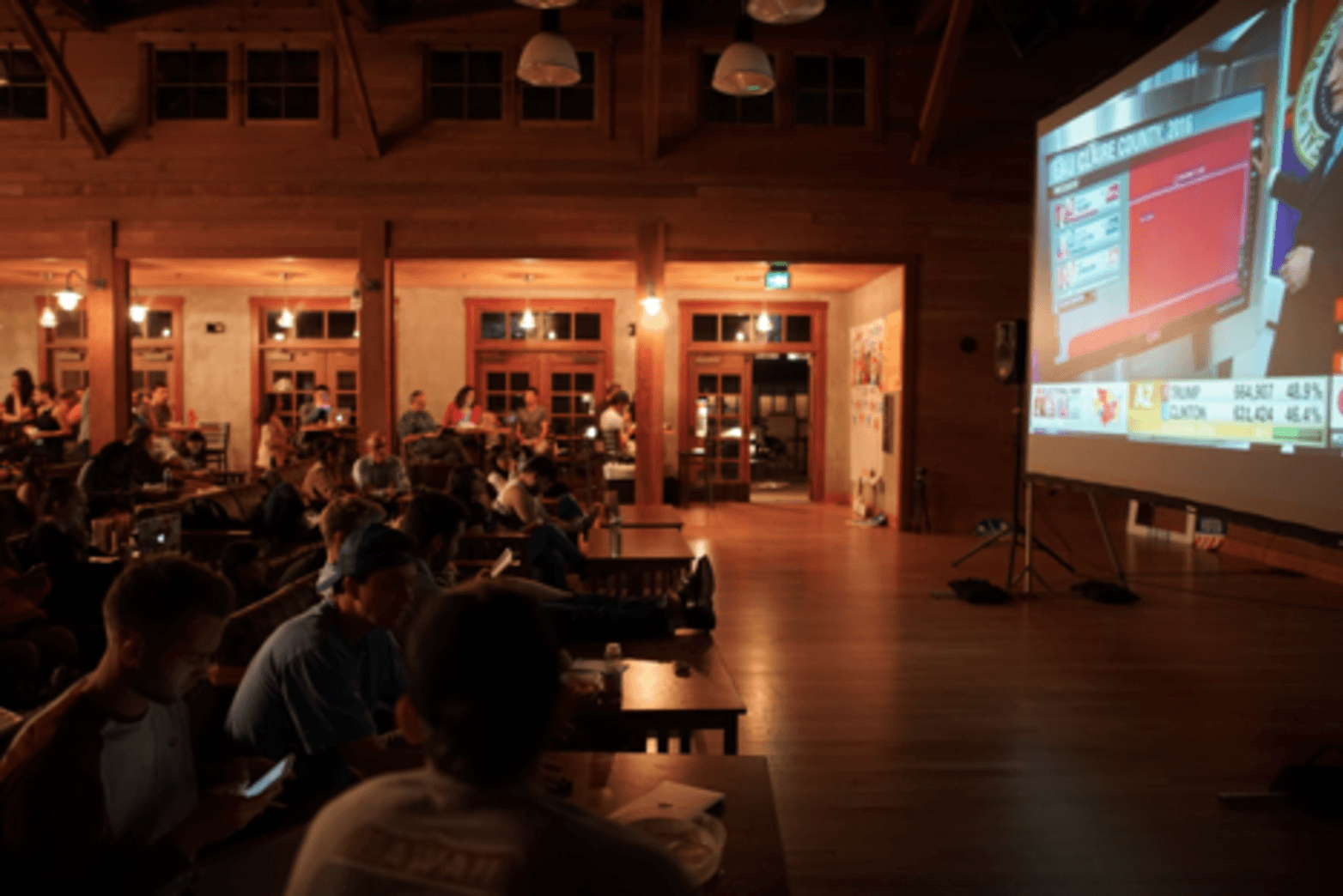 Occidental students experienced fear, anxiety and optimism as they watched Donald Trump take the lead over Hillary Clinton on a projection of CNN Nov. 8 in the Tiger Cooler. The Office of Student Life, Residential Education and Housing Services, Dean of Students and Office of Community Engagement worked together to provide nearly 400 students a shared space to watch the votes trickle in.

“It’s closer than I thought this early. At this point, it’s still too early to tell,” Politics Professor Roger George said. “Like a lot of people, we’re all anxious. I’m interested in the possibility of how allies could react.”

“I thought of the election as a community type of thing … I wanted to take [the results of] the vote [we made] with people,” Promise Li (junior) said. “I watch many [media] outlets to get a balance. It’s interesting how the media’s been reporting a lead for Clinton but the reality is a big difference. It’s nerve-racking. I’m astonished.”

With almost half of Occidental students being native Californians, students have been heavily discussing the California propositions.

“I’m from Ohio. The election is always really important in Ohio because it’s a big swing state,” Eric Malmquist (sophomore) said. “I’ve been thinking about this since I woke up this morning. I’m incredibly anxious and nervous; it’s closer than I thought it was gonna be.”

“There was a lot of anxiety around, and I wanted to come give support,” Andrew Huerta (senior) said, “I can love a candidate. I can hate a candidate. I shouldn’t be afraid of a candidate. There’s something incredibly wrong when I am.”

“I wanted to see how the election was going because a lot of people were talking. I wanted to be with the community. I hadn’t really really thought about the possibility of [Clinton] losing. I would be disappointed and sad. I’m still pretty confident,” Andrés Sobalvarro (first year) said.

By 8 p.m., Clinton had won California and Hawaii, and most students cheered loudly.

“As the map became more and more red, I became afraid for the future of the country,” Timothy Valero (junior) said. “I’m legitimately scared of having a Republican president, House, Senate and judiciary.”

Students such as Emma Yudelevitch (sophomore) and her friends were still smiling at 9:25 p.m.

“I think it’s really important to be aware of what’s going on, especially because I voted today. I would be devastated and disappointed if Clinton lost. I’m passionate that Trump is not the best candidate. I’m still trying to be optimistic; I still think she can win,” Yudelevitch said.

“I just wanted the group thing. I thought this was gonna be a good night. Now it’s like a massive mourning. I brought my guitar thinking this would be a nice celebration. Music brings people together; I might play American Idiot if things go south,” Pablo Nukaya-Petralia (first year) said.

“It’s good to know that not everyone in the U.S. is in agreement with Trump and his policies. I saw a picture of the map that was all red, it made me scared and embarrassed. I’m in denial, I honestly don’t fully understand how this is possible,” Naomi Field (first year) said.

“I like the energy when Hillary wins one and people cheer,” Florence Matteson (first year) said. “I’m upset about what this country has come to … It shows how racism, sexism, Islamophobia and racism towards Mexicans are all still present in the U.S.”

Masks, tents, whiteboards & trees: Classrooms in the time of COVID-19