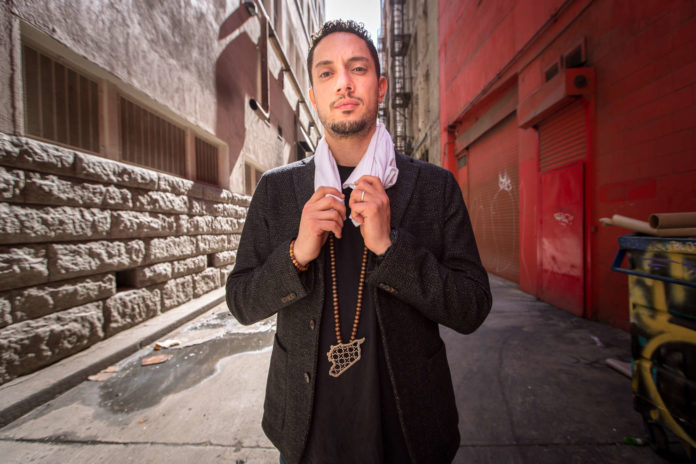 Many critics of mainstream hip-hop mourn the loss of the genre’s revolutionary messages — the synthesized sounds of the Top 40 tracks seem to lack the political radicalism and socially conscious themes that inspired some of early hip-hop’s greatest artists. Yet social justice driven rhymes have not disappeared entirely, thanks to artists like Omar Offendum.

Soft beats played in the background while students buzzed with excitement as they sat in Choi Auditorium’s electric orange seats, waiting for Omar Offendum’s appearance April 16, which was arranged by the CORE Program and Professor Amy Tahani.

Before Offendum took the mic, he gave students a chance to share their original music and poetry. Daniel Waruingi (first year) and Earl Park (senior) performed a set composed of three of their lyrically laudable raps. Offendum took a back seat, acting as Waruingi and Park’s DJ while they performed. Josh Park also recited one of his raps as a first time hip-hop performer. Karim Sharif (sophomore) then performed his spoken word piece titled, “They Say I Look More Arab in the Summer Time.”

The students’ soulful cyphers set the tone for Offendum’s performance. As he took the mic, Offendum introduced himself with a shy, excited smile before launching into a set consisting of both spoken word pieces and raps.

Offendum is a Syrian-American who was born in Saudi Arabia and raised in Washington, D.C., though he has been living in Los Angeles for the last decade. Much of his work is influenced by his cultural heritage and experiences as a Muslim-American. His verses convey the complexity of his Arab-American identity, caught between Syria and America. In his song “Destiny,” Offendum says, “It’s hard livin’ in the West when I know the East got the best of me/Could be lookin’ in my eyes, but you’ll never really see the rest of me/Can you hear me masiri? Bilingual’s what I’m blessed to be.”

The simultaneous connection and disconnect between his parent’s country and his American upbringing is an essential and evolving part of Offedum’s identity. His music is central to his continued exploration of this fluid relationship.

“I, as a young Syrian-American kid wrote [“Destiny”] from the perspective of someone who had this longing for life in the East,” Offendum said. “There is a very interesting thing that happens as a child of immigrants who was raised to understand how beautiful and rich [are] our history and traditions; you want to preserve the perfect image of the place you’re connected to, but it’s not always as you picture it, for good and bad. I think, I think about that deeper than I did [when I wrote the song].”

Offendum added that he views his cultural identity as split since he is a foreigner in the East and treated as an outsider in the West. His music, perhaps, is an attempt to bring coherence to, or embrace the chaos, of the two worlds he inhabits. Offendum said he uses his lyrics to inspire people who are regarded as the “other.”

“Raising awareness about important issues is a responsibility,” Offendum said. “Yes, I’m a rapper, a poet and an activist, but more importantly, I’m a human being who believes in equality and justice for all, and that’s what I hope to share in my music.”

Offendum’s work is certainly driven by his political message, a fact which enhances his artistic style. His smooth, melodic beats weaved with poetic lyrics create a sound that is both pleasing to the ear and elevates the listener’s consciousness, reminiscent of the likes of Tupac and other legendary rappers of the ’90s.

Offendum grew up listening to rap and was heavily influenced by A Tribe Called Quest, De La Soul, Tupac, Brother Ali and Public Enemy, drawn to their radical vibes and socially conscious rhythms. However, as Offendum began to explore the wider music world, he found that he was drawn to reggae music, which had a profound effect on his musical taste and style.

“I was drawn to reggae because of the way [reggae musicians] were able to really get at the core of a lot of these issues that I find so important today,” Offendum said. “There is a political consciousness in the roots of reggae, a spirituality and an ability to say some very complex things in a very simple beautiful melodic ways.”

Though his taste in music has expanded, Offendum maintains a connection to rap through Arabic poetry. Poetry, Offendum said, is the backbone of the Arabic language.

“Arabic is beautiful, deeply poetic language,” Offendum said. “It’s unfortunate because I know that the only form [most people] are ingesting the language is in the form of an angry dude yelling on TV. Yet Arabic and poetry in the Middle East has a long-standing tradition, so there is a deep respect for storytelling and music. It’s no surprise to me that the mashup of [hip-hop and Arabic] has taken off.”

More than anything, Offendum views hip–hop as a positive medium for communication which can be used to inspire change.

“I think hip-hop is a modern incarnation of something that’s been happening all over the world for thousands of years,” he said. “[Hip-hop] is beautiful art, storytelling, community gathering that we can all find some sort of connection to.”