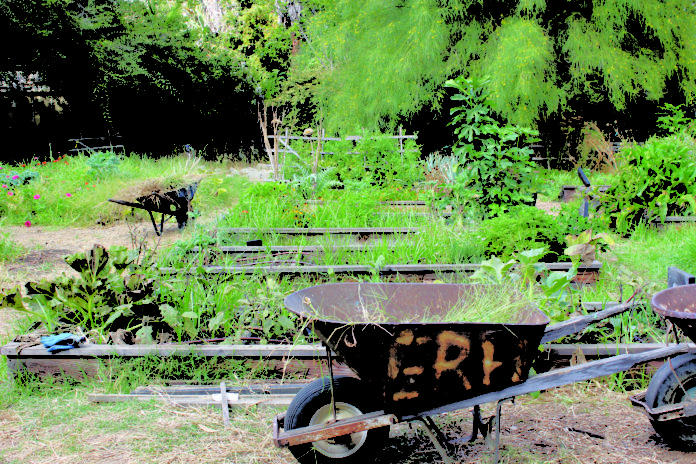 In a garden shrouded in overbrimming greens, a group of Eagle Rock Jr./Sr. High School (ERHS) students wearing gloves and carrying shovels gather on the afternoon of Sept. 10 to weed a plot. These students are members of Future Farmers of America (FFA), a local chapter of a national youth organization that promotes agricultural education for middle and high school students. Members of this FFA chapter meet in the ERHS garden every Tuesday and Thursday after school to help maintain plants and work on assigned or personal projects.

Sean Butiu (junior) is the president of ERHS’s FFA chapter. He points out the different areas to the garden, each requiring unique treatment depending on the season.

“Most of our time is usually spent on the plots, which is the garden beds and lower areas,” Butiu said. “This time around in the year, we’re trying to get the weeds out so during winter, we can start planting the cool-time seeds so we can let those grow — because we know the weeds are definitely going to impede on, and also compete with, the plants that we’re trying to grow now.”

The garden, named ERHS’s “Horticulture Center,” functions as the classroom for horticulture classes. It is as old as the high school itself, which opened in 1927. While the school’s 1928 yearbook shows the existence of an “Agriculture Club,” horticulture only later became an academic elective. Today, horticulture has been a Career Technical Education (CTE) pathway since Fall 2018. CTE is a program that trains high school students in career paths such as health science, engineering and marketing.

Jeffery Mailes is the horticulture teacher at ERHS. He arrived at the school last year and has since worked to give his students opportunities to take their experience beyond the school garden.

“My vision is to have this space be a nursery and a demonstration garden,” Mailes said. “I would also like to empower my students to take part in our landscaping business, where the students can go after they’ve learned things in my classroom. They can go out into the world and then start their own businesses growing gardens in their communities.”

Since his arrival to campus, Mailes has endeavored to improve both the garden and the student clubs who work within it. Before creating an FFA chapter, students participated in “Nature Club.” Lucien Tomlinson (senior) was the president of Nature Club and is the current vice president of FFA.

“Almost anything you can point out has been completely changed in the past two years,” Tomlinson said. “We got raised beds — they used to be all ground pots, and now they’re just all raised beds, which is really great.”

Tomlinson said there has also been more diversity in what students plant and their methods of caring for the plants, along with a new sense of shared responsibility.

“This place has actually been fairly run down before Mr. Mailes came in, so it’s really a lot of hard work and dedication and just passion when it comes to building,” Butiu said.

As much as it is a workplace, the garden doubles as a playground: specifically, a hideaway for student gamers.

“Gamers usually like to stay inside and not go outside,” Butiu said. “So then one thing for me is that now I’m going outside more, spending more time in the sun, breathing fresh air, that usual stuff.”

ERHS principal Mylene Keipp said the garden belongs as much to the whole school as it does to the horticulture program.

“I want to make sure that the garden has always been a therapeutic place on our campus,” Keipp said. “When some of our students just need a place that’s calming, that’s the place to go.”

Keipp hosts “Coffee with the Principal,” where she meets with parents in the garden to build community. Other events, such as school-wide BBQs and “Music in the Garden,” also help connect students with nature and each other.

The garden serves not only ERHS students, but also the whole Eagle Rock community. Every semester, there is at least one “Clean-Up-the-Rock Day” where students partner with organizations such as Christian Assembly or Target to create and complete garden tasks and activities.

Butiu sees the garden as a way to reconnect the urban community of Eagle Rock with nature.

“I want to first build on community,” Butiu said. “Because nature isn’t really one thing that comes into mind once you look into society — you see cell phones, advertisements, cars, the streets, but you never really appreciate nature around you.”

For many non-tenure track faculty, the future remains unclear amidst the pandemic

Senior commencement postponed, ensuring the class of 2020 is celebrated