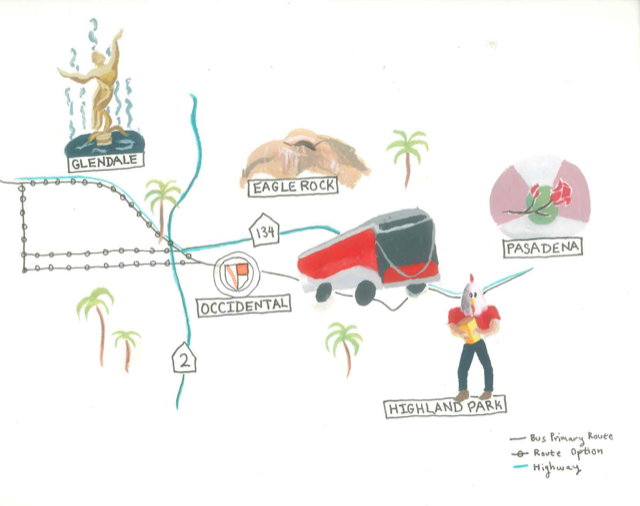 The North Hollywood to Pasadena Transit Corridor is an ongoing $267 million transportation project that plans to run Bus Rapid Transit (BRT) systems for 18 miles between the San Fernando and San Gabriel Valleys. According to the project’s Alternative Analysis Report, the initial route planning began in late 2018. Between then and now, Metro has collected public opinions through multiple public scoping meetings throughout Summer 2019.

According to the Alternative Analysis Report, there are currently 700,000 daily trips along the NoHo-Pasadena corridor. Haas said Metro projects 23,000–30,000 people would ride the BRT line daily. However, Metro cannot ascertain final projections until specific routes are decided, which will not happen until around Fall 2020.

David Schumacher, a planner for the transportation planning company STV, said planners use statistical models and surveys to research traffic.

“They use the model they have, which includes ‘vehicle trip’ — they analyze all the trips that are happening in an area to see where people are coming from and where they’re going to,” Schumacher said. “They can do origin-destination surveys where they literally go out and interview people at stop signs … and there are sensor plates throughout the county that count cars.”

Metro proposed two initial plans for the BRT project in late 2018, according to the Alternative Analysis Report. One was a “primary street” option and the other a “primary freeway” option, meaning the bus route would either run mainly along streets or freeways. These two options were eventually eliminated because they did not pass the initial screening evaluation, which includes criteria such as physical constraints to the route and land use compatibility. Instead, Metro improved on the first two options to introduce three new types of possible routes: street-running, freeway-running and hybrid-running. A combination of environmental factors and public feedback made street-running the main lane option, Haas said. In addition to street-running lanes, some segments along the corridor will also benefit from freeway-running and hybrid-running lanes.

“Ridership costs, environmental impacts, public feedback, congestion, traffic issues [were factors],” Haas said. “In addition, key locations. Initially, I don’t believe this project included a connection to Pasadena City College, so we added that in as a need. Are there major educational areas along the corridor? Are there major shopping areas? Major multi-family apartments that allow us to connect people to easier access?”

Schumacher also said planners typically consider a variety of environmental factors, but he added that sometimes when two routes are very similar, it would depend on Metro’s preferences to decide the final route.

“If you look at ridership, for example, it [Alternative Analysis Report, page 61]said the ‘very high’ [threshold] was 28,000 or more a day, and then ‘very low’ was 24,000 a day. In the grand scheme of things, that’s not the biggest difference,” Schumacher said. “You will measure multiple routes and you realize they really have a lot of similar pros and cons and they score very similar. You do want to try to differentiate them somehow … it also depends on what Metro wants to prioritize.”

Haas said for the NoHo-Pasadena BRT project, Metro’s key focus is to connect transit stations on the Red and Gold Metro lines and then identify important locations to pass through along the way.

For the street-running option, which Metro ultimately chose for the majority of the route, there are four ways in which the busways are typically inserted into the existing road infrastructure. These are center-running, center-running with median, side-running and curb-running bus lanes, which represent the position on the road the bus is going to travel in. For example, with curb-running bus lanes, the BRT bus will travel on the lane immediately adjacent to the curb. Haas said decisions on which exact running way will be chosen has yet to be decided. Metro will most likely reach a final decision on running way configurations when the Environmental Impact Report (EIR) is published around Spring 2020, Haas said.

Boris Suchkov, a self-employed urban planner who lives in the NoHo-Pasadena transit corridor, believes the BRT project is certainly beneficial but has a lengthy planning process.

“The planning process takes too long. It’s going to be six to seven years between proposal and implementation, and in that time people form all sorts of opinions, and without evidence of how this will actually work, there’s a lot of frustration both sides,” Suchkov said. “You can put in improvements that are similar that might give you 80 percent of what you want, but those improvements could be done very quickly, under a year.”

Seva Rodnyansky, an Urban and Environmental Policy (UEP) professor who specializes in transportation, said the current timeline is appropriate for a project this size, and that it is better to plan correctly in the beginning than to fix faults later. Schumacher said there had been previous examples where corrections had to be made later.

According to Haas, Metro is now in the process of producing a final EIR, and there will be future rounds of community meetings to collect feedback.

“The timeline can vary, but essentially the idea would be Spring 2020 we would release a draft EIR for public comment,” Haas said. “A very important thing to note along the way is that there are going to be multiple opportunities going forward for feedback, and we definitely want to hear from students.”

Confusion among Greek orgs leads to noncompliance with bylaws