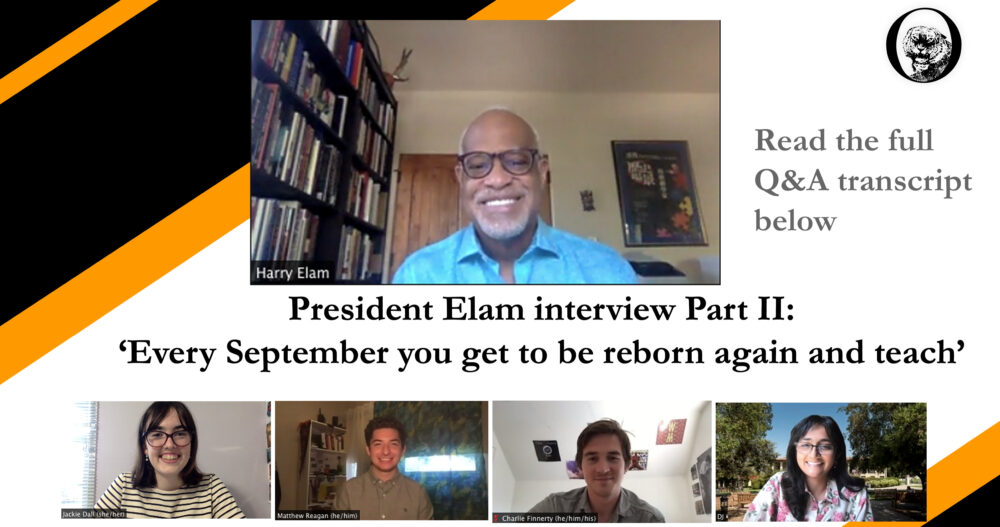 Jackie Dall: In past interviews, you’ve talked a lot about your theater background. One question I have now that the Role-Gym’s black box theater at Stanford was recently renamed after you. What about your work and career in theater has been the most meaningful for you?

Elam: What’s been the most meaningful for me is the students — that time. And I look forward, eventually, to directing a play at Oxy, with a student being an assistant director, and also to teach a class. […] I had graduate students who have gone on to be professors, and that really is satisfying to see them out in the world and do that. And then I’ve had undergrads who’ve gone on to many different careers and have done some interesting things. In terms of actors, you know, one of my advisees was Issa Rae of… what, what’s that show? I can’t think of her show right now…

Elam: “Insecure!” My wife from behind. And Sterling K. Brown who’s on “This Is Us” are more recent, and I’m certainly proud of all the things that they have done. So that’s a good thing that I’ll look to continue.

What I love about being a professor, and it’s true about being a director too, it keeps you young. Every September you get to be reborn again and teach something new. Even as my hair disappears, I feel young at the start of it. So all of those things I’ve enjoyed about a life in the theater. You know, the creative energy that comes from in and around a play and working together with everybody towards one goal, and really having that collaborative input is something I love and welcome the opportunity to do.

DJ Prakash: For you, what comes to mind when you think of home?

Elam: First thing that comes to mind is, not the now but the then meaning, “Where did I grow up?” Home for me, I’m from Boston, Mass., and lived there for the first 22 years of my life. My parents were both born there and so that sense of home there, it’s not home anymore simply because both my parents have now passed away and no family lives there, no immediate family lives there. So home is connecting with that family, which is my sisters and my aunt.

Home also for me for the last 30 years has been here in Northern California and great friends and the home that we’ve built. Home for me is my wife and my daughter — my daughter graduated from college in 2016, but now lives in Studio City and works for Warner Bros. So home is now about building a new home here at Occidental.

Both my wife and I are really excited about the new house, the president’s house. It’s new to us, it’s old to here, and we’re looking forward to getting there tomorrow [Sept. 5]. We like the fact that, as I said, my daughter is in Studio City and is 15–20 minutes away so she can come visit. So home is that sense of family more than I guess anything else for me, and a commitment to family as being the thing that I value most in this world. I love the idea of coming home to family each day and all that that means, and having home-cooked meals as well.

Matthew Reagan: Just wondering before I get into the next question, what are your cats’ names?

Elam: They’re brothers and they’re 6 months old now. One is named Leland, as in Leland Stanford and the other is Oswald, Oswald the Tiger. Hopefully you’ll see Oswald. They’re good guys.

MR: Continuing on that vein of your family, my mom’s a professor and I feel like that’s had a big impact on me. I know your father was a judge, your mother worked in education and academia. How do you think that impacted you, and ultimately where you are and your career?

Elam: When I got to college and into college, I always thought I was going to be a lawyer, like my dad, and got to senior year of college and realized that the only thing that excited me about the law was the drama of the courtroom — so not a good reason. So I went and got a Ph.D. in drama. But I was scared to tell my dad, you know, that this is what I was going to do. And when I spoke to him, told him that this was the plan, he confided in me something I didn’t know before. He said the only thing he wanted to do other than be a lawyer was to be an actor and then he showed me pictures. He ran for city council, he didn’t win, in Boston back in 1959, and one of the ways that he sought to raise money for his campaign, he put on a play that he directed and wrote a musical, so I thought that was really cool. So it wasn’t letting him down in terms of that.

Family is really invaluable. When I showed this interest in theater early on, my mom used to keep a box of clothes, old clothes and I would dress up in different costumes out of that box. I remember one summer, hot, steaming summer in Boston, I put things together and made a Santa Claus thing and she said, “Oh, it’s so neat.” She marched me through the streets to grandma’s house so grandma could see me as Santa Claus and people were looking like, “Who is this crazy kid?” […] But she also took me to plays, and so that sense of encouraging me in different ways. I was blessed that I had parents who were able to do that and felt that it was important to encourage students to explore, and also valued education and really saw that as important. Was that your question? I might’ve gotten off, Matthew?

DJP: I definitely understand also from my own background, that sort of like push and pull between, all I ever wanted to do was dance, but I have XYZ responsibility or something. I think that’s something that a lot of people have been talking about, for college, with like, certain majors, certain paths being branded a certain way. Whereas this whole thing of liberal arts versus technical skill. Do you think that it has to be a dichotomy of one versus the other?

Elam: I think no. And I know this is going to be important for you as you’re making the decision about this [declaring a major]. I’d say listen to your gut. I did the wrong thing. I’ll be frank.

I went to Harvard thinking that I wanted to go to Harvard Law School, so as an undergrad, the proctor in my dorm was at Harvard Law School. […] And I asked him what he majored in as an undergrad and he majored in social studies. Social studies was a special major, a mixture of government, history and economics. […] And so I said, “Oh, he did that? I’m going to do that?” And so I got into that major. I would say that you’re going to do better if you find […] something that you really feel you can sink your teeth into. Something you want to do for a comp, you know.

Only, DJ, 27 percent of people are doing something now related to their college major, 27 percent. So that means most people are not, right? And what an employer’s going to be impressed with is what you found and what you made out of what you did. So, as you’re thinking about CS [Computer Science] and the other things you’re thinking about, think about that relationship to it. And that doesn’t mean, if you do something else, you’re swearing yourself to a life of poverty. […]

So in terms of CS, the reality is that coding today, five years, 10 years from now is going to be totally different. I mean, exponentially, the technology changes. So what you’re going to need to be able to do is, and I think what our CS does, is open up and think, more humanly or humanely about what you’re doing in CS and how the coding relates to the social, environmental, the other contexts in which you’re working in.

But you also have to be prepared to be a lifelong learner and be able to change and that’s something that a lot of different majors can do. So all the majors you mentioned can do that. So I would think about what […] jazzes you. What gets you excited, what’s something that you want to spend more time with and think of that.

Yeah, it’s hard sometimes too, talking to parents because they want you to, I mean, college is expensive, you know, and they want you to excel and they want you to have a job at the other end. So, that sense of working for a job at the other end, I’d be [as] systematic about that as I would be about choosing a major and go to the [Hameetman Career] center, and also talk to other people. There was a job fair online for Disney recently, that was really, really successful. Students came out for it. So I’m sorry for preaching about this. But since, as I said, I know I did the wrong thing, you know.

DJP: Thank you for your advice, I’ll definitely be needing it.

MR: This might be even a good question to ask your wife but I’ll get it out before that makes any sense. President Veitch was really known around campus for speeding around in his green Fiat. Do you have any idiosyncrasies or habits that students at Stanford picked up on or anything like that that comes to mind?

Elam: Hmm yeah, it would be better probably to ask somebody else. I don’t have a green Fiat but let’s see.

MR: This is also interesting because it is an admissions question. It’s “what is your idiosyncrasy?”

DJP: I had rollerblades, it was really hard.

Elam: Do you have a helmet?