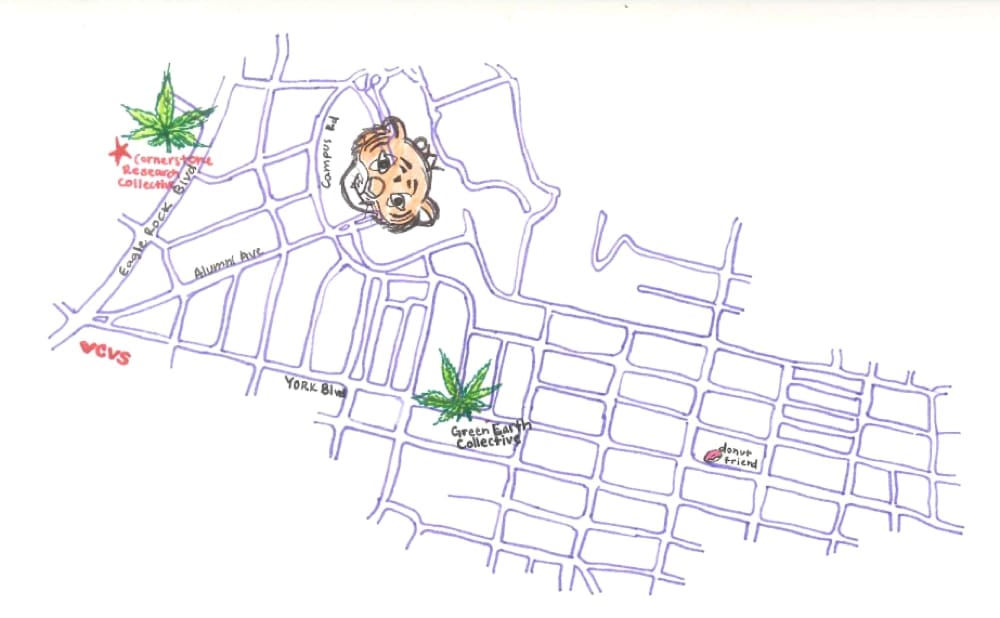 As of Feb. 2, Cornerstone Research Collective is one of two dispensaries in Eagle Rock that has obtained a temporary city permit to sell recreational marijuana. Ninety-nine Los Angeles businesses have received recreational city permits in accordance with Proposition 64 — the Adult Use of Marijuana Act — which passed in November 2016. Cornerstone also has the state permit required to sell recreational marijuana, according to owner Carlos de la Torre. With the two permits, the dispensary can sell marijuana to anyone over the age of 21 with valid I.D.

Located only 1.5 miles away from Occidental’s campus, across the street from the Target on Colorado Boulevard, Cornerstone has been serving the Eagle Rock community for almost 11 years. De la Torre said that in order to appeal to the Occidental community, Cornerstone is offering a five percent discount to Oxy students. The dispensary also offers a 15 percent discount for new members on their first visit.

De la Torre said he has played a vital role in the political process of legalizing recreational marijuana for many years. In 2012, he worked with other dispensary owners and manufacturers to construct the Proposition T Ordinance. One of the goals outlined in the legislation was to amend the Municipal Code Chapter 8.64 — Prohibition of Recreational Marijuana Businesses — in Lemon Grove, California. Despite the ordinance not being approved, he continued to work as an active member of the United Cannabis Business Association, a group of dispensary owners and cannabis manufacturers in California that focuses on raising awareness about the cannabis industry.

Despite De la Torre’s efforts to advocate for recreational marijuana legalization in the last decade and a large uptick in customers since Feb. 2, De la Torre said he remains ambivalent about Cornerstone’s transition from a medical to a recreational dispensary.

“It’s a relief, I suppose,” De la Torre said. “However, there is a little bit of apprehension as well because with this new chapter comes a lot more responsibility.”

De la Torre said that since obtaining the recreational license, he and his employees have been working hard to measure, label and package the cannabis in order to comply with statewide standards.

“There’s a very measured way we do everything,” De la Torre said.

In addition to being a dispensary, Cornerstone is one of Los Angeles’ only research facilities for cannabis. There are over 100 blog posts on Cornerstone’s website, where cannabis researchers contribute their findings on topics ranging from the effects of marijuana on creativity to cannabidiol (CBD) and tetrahydrocannabinol (THC) research. One of the contributors to the blog is Michelle J. Stone, Cornerstone’s research coordinator.

According to Stone, CBD and THC are both chemicals in cannabis, and they serve different purposes: CBD is not psychoactive and is used to relieve seizures, while THC is psychoactive and is used to relieve pain. Working in partnership with California State University, San Bernardino, Stone has been testing the ratios of CBD to THC in healing oils in order to find the most effective ratio between the two chemicals for treating various medical ailments.

Like De la Torre, Stone said there are many positive aspects of Cornerstone becoming a recreational dispensary, but she also fears that cannabis research will not be utilized in the future because people have the freedom to buy whichever strains they want without a doctor’s recommendation.

“It gives researchers who have had their hands tied for a long time a chance to collect self-report[ed] data and go out there and ask what’s working without the fear that it’s an illegal substance,” Stone said. “But why research something people already have access to and [that] they can choose to use in any way they want?”

Cannabis manufacturing and sales taxes have sharply increased as a result of recreational legalization. According to Milly Limon, Cornerstone’s manager, taxes have increased to 20 percent for medical purchases and almost 35 percent for recreational use since Proposition 64 passed, making marijuana at all recreational dispensaries significantly more expensive than before.

“It’s disheartening to see how much the government is raising taxes and how hard it is for a lot of our patients who really need the medicine to afford it,” Limon said. “We’re hoping that all those funds will go to the city and will improve the city.”

Limon said that Cornerstone has maintained relationships with boutique cultivators, which are specialized, small-scale distributors. Due to the new laws, these cultivators do not have the money to receive all of their licensing.

According to federal law, it is still illegal to smoke on Occidental’s campus, but so long as students are over the age of 21, they can enjoy responsibly off campus.

Update: This article was updated Feb. 15 to correct the demographic eligible for a 15 percent discount at Cornerstone Research Collective.