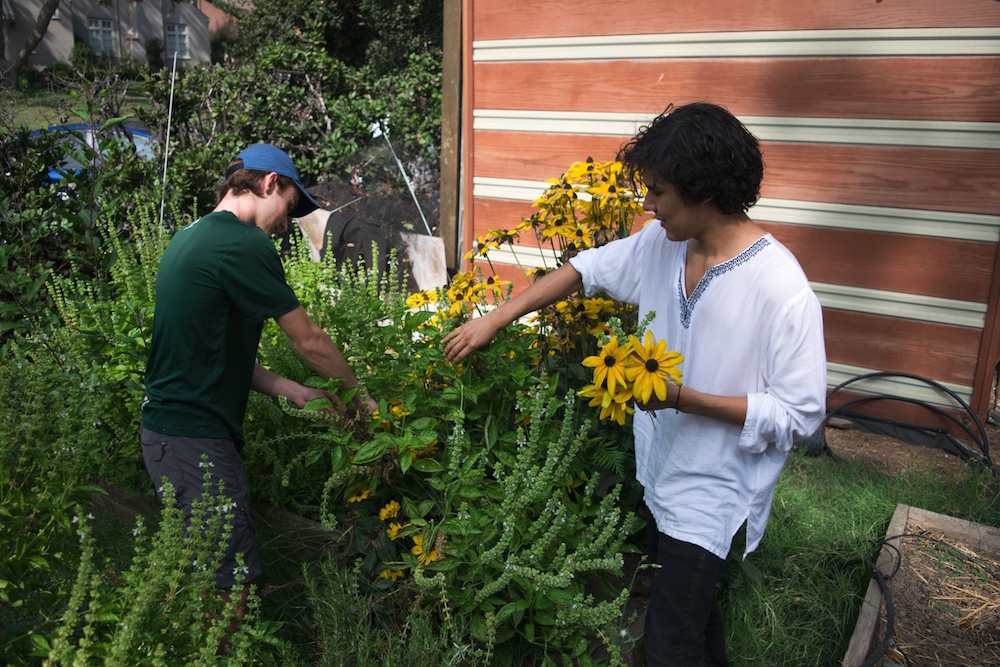 The Food, Energy and Sustainability Team (FEAST), a student club at Occidental since 2009, became a new student service this semester. Situated in the garden next to the Urban and Environmental Policy Institute (UEPI), FEAST is made up of students who are passionate about nature, gardening, sustainability and the environment.

The leaders of FEAST, director Diego Zapata (junior) and assistant director Triana Anderson (senior), are excited about the former club’s transition to a student service because it opens up many possibilities, including the ability to employ students.

“We have just hired our first round of employees which will hopefully allow us to take on bigger projects and then delegate bigger projects as opposed to always struggling to organize various events,” Anderson said.

Zapata agreed, saying that having paid employees will allow FEAST to focus on more significant initiatives.

“By having a staff, we will be able to mobilize volunteers more,” Zapata said. “Our main goal for FEAST is to get students into the garden, to get their hands dirty and teach them how to grow their own food and have a sort of respect for small-scale urban farming.”

Transforming FEAST into a student service was not a spontaneous decision. Former leaders of the program advocated for this change during their time in charge, according to Zapata.

“I wasn’t involved in the planning process of having FEAST being a student service. It was Skye [Harnsberger ’17] and the previous president, Dylan [Bruce ’16], who really got the ball rolling and started building that momentum,” Zapata said.

This move was well deserved, according to UEPI Program Coordinator and FEAST faculty advisor Megan Bomba.

“It’s almost entirely student-run and student-led and I think that having a leadership model on campus is important for students to both innovate ideas and pass them on to others,” Bomba said. “The move to become a service really speaks to how motivated the current leadership in FEAST is to really take it to the next level and be institutionalized on the Oxy campus.”

One initiative FEAST members are already focusing on is creating a seed bank that can be used by students and community members alike, according to Zapata.

“We will be growing heirloom varieties in the garden and saving all those seeds into the seed bank so that people of low-income communities can have access to fresh, locally grown organic seeds,” Zapata said.

Multiple members of FEAST emphasized community involvement as a critical feature of the garden.

“Our goals are to get more student involvement this year and we also want to try to help the community more,” Celeste Padula (sophomore), nursery operations manager, said. “[We envision] trying to go out and provide opportunities to help the community through getting people access to food or helping them start their own garden.”

Zapata and Anderson encouraged more students to visit the garden, saying that it can operate as a space for students to clear their mind and relax for a few hours.

“It feels like you’re off campus, but it’s so close, and it’s, for me, like a mental health space,” Anderson said. “It feels like you get away from campus and yet you’re still right here; it’s a break from the day.”

Zapata added that it is critical to have peaceful spaces like the garden on college campuses.

“Because college is such a high-stress environment, having a space like this that is beautiful and accessible to everyone is really important to have on a campus,” Zapata said.

One of FEAST’s goals is to educate students on how exactly they can lead and develop more sustainable lifestyles, according to Anderson.

“Because people are shaping their habits in college, allowing people to have access to and be educated on sustainable ways of living is an important resource to offer,” Anderson said.

Although there are many groups involved in sustainability at Occidental, Zapata believes that FEAST is one of the most prominent.

“I consider it to be the front line group for sustainability on campus because there are a lot of entities on campus that do sustainability oriented things, like [Campus] Dining, but FEAST is the only group that is actually organizing students and mobilizing them to form a greater cause,” Zapata said.