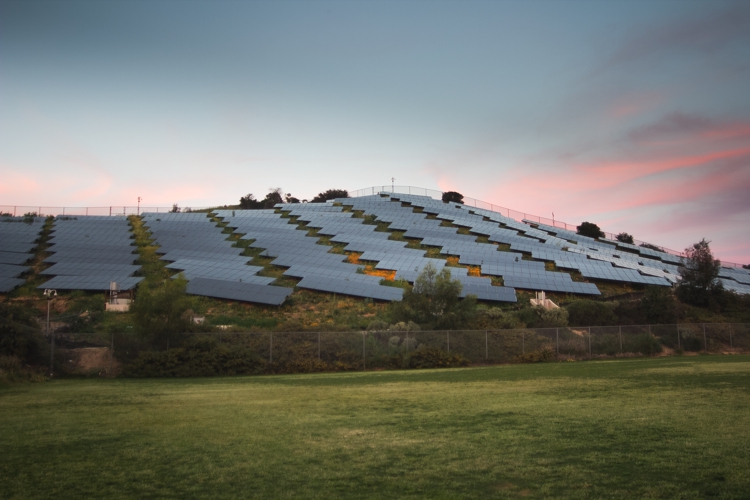 Occidental’s one-megawatt (MW) solar array on Mt. Fiji turned four years old this month, physics Professor Dan Snowden-Ifft announced via campus email March 4. The email highlighted that the array produced 1.82 gigawatt hours (GWh) of electrical energy this year — about the average of the previous three years — which reduced the college’s energy bill by $246,000. With a total of $1.02 million saved to date, Occidental is 25 percent of the way to paying off the $3.423 million cost of installation, which Snowden-Ifft calculates will take 19 years.

Snowden-Ifft initiated the project in 2012 with the help of Occidental’s Green Revolving Fund, which he co-founded, later renamed the Occidental Sustainable Investment Fund (OSIF). Since the panels were first switched on in 2013, the array has powered 12.2 percent of the college’s energy use, according to Snowden-Ifft.

With the array producing as much energy as planned prior to its installation — apart from a few issues with the inverters such as a short circuit, possibly caused by a mylar balloon, and subsequent voltage dip on campus in 2015 — Snowden-Ifft has been pushing to expand Occidental’s solar capacity. He created a plan to add another MW of panels primarily over parking lots to provide shade for cars, increase rebates from the Los Angeles Department of Water and Power (LADWP) and offset the projected increase in energy usage from the planned air conditioning expansion in five residence halls.

Snowden-Ifft is confident the OSIF, comprised of faculty, board members and student representatives who vote on the plan, will fund the cost and installation of the panels. OSIF co-founder Professor Bevin Ashenmiller, who has seen a brief, approves of the plan.

Since OSIF has not met in a while, Ashenmiller is unsure where the committee will stand.

Snowden-Ifft said the only setback so far is a nearly $750,000 upgrade to Occidental’s aging electrical substation that is necessary for handling more solar energy but that neither the college nor LADWP will agree to funding.

“What I need is to have our electrical substation upgraded so that we will be compliant with LADWP regulations,” Snowden-Ifft said via email. “Our substation is very old and [is] our electrical lifeline to the grid. It could stand upgrading even without the solar.”

One piece of the existing substation is owned by LADWP, while the other piece is owned by the college. Upgrading it would require both parties to agree on all aspects of the project, according to Director of Communications Jim Tranquada.

If an upgraded substation were to be constructed in the current location, power to campus would have to be cut off while the new substation was built, according to Tranquada. Alternatively, the substation could be housed in a new location. Power could then be switched over from the old substation once construction was complete. But this option has its drawbacks.

“There is a limited amount of space available to house a new substation,” Tranquada said. “Aesthetic considerations would also play a role, since this area is directly across Campus Road from neighbor’s homes.”

Having tried in vain to secure funding from both parties, Snowden-Ifft said the project is at a standstill.

“I would love to see more solar panels on Oxy’s campus,” Pedrick said. “Although they may be costly upfront, sources of renewable energy ensure clean energy for future generations.”