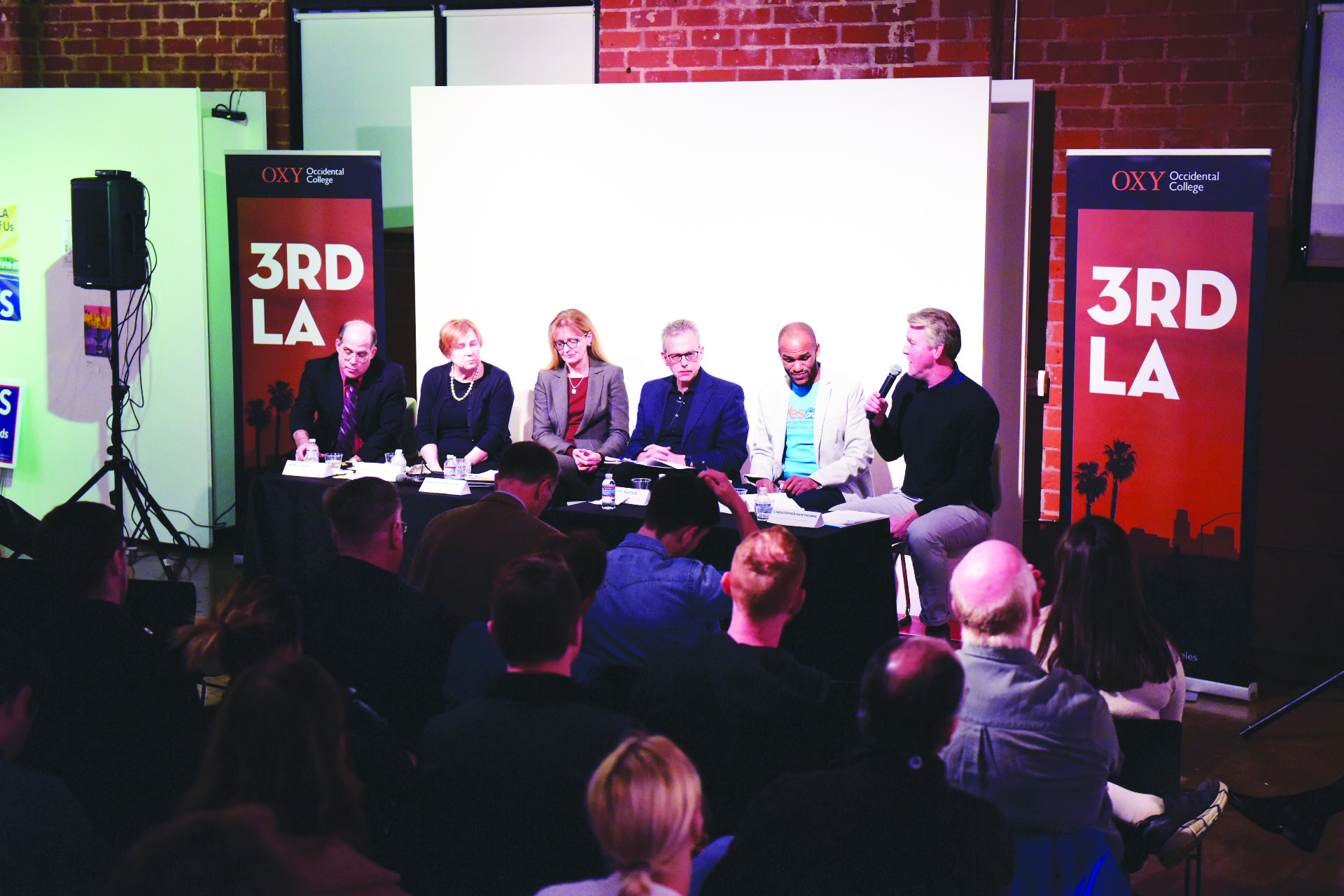 The event was the first of this year’s speaker series for the project and took place six days prior to the LA County consolidated elections. Occidental students and staff attended the event, held at the in the downtown LA Arts District, alongside other LA residents.

Advocates argued that Measure S would curb city hall corruption; since city officials would be unable to amend the general plan uncircumstantially, developers would gain nothing by offering bribes. Opponents argued that obstructing development would also prevent the construction of affordable housing since most development requires some form of general plan amendment.

Los Angeles Times architecture critic Christopher Hawthorne has helped organize the Third Los Angeles Project every year at Occidental and also teaches the class in the Urban and Environmental Policy Department attached to the project. Third Los Angeles has a speaker series open to the public each year, and Hawthorne explained that events this semester will focus primarily on political engagement. He described Measure S as the most hotly contested and polarizing ballot measure in his career as an LA Times architecture critic and believed that a public event would help students and others grasp the full implications of Measure S.

“[The panel] was a way to take the theoretical conversation we have in the classroom, and give the students a front row seat to the civic conversation itself,” Hawthorne said. “To really understand how deeply felt these issues are for advocates on both sides.”

The Politics of Housing panel discussion became contentious not long after introductions ended. Panelist Goodmon advocated for Measure S, referencing the population decrease in Hollywood despite an increase in newly-constructed buildings’ sizes. The buildings are marketed to an affluent class rather than working class, he said.

“This is about the urban cleansing taking place, about the 13,000 working-class Latinos who worked to erect these massive luxury towers and are now being pushed out,” Goodmon said.

Panelist Pastor immediately responded with a request for empathy.

“I’d like to change the tone from demonizing people on the other side, because the people who are saying no on S are not just billionaire developers, they are construction workers, affordable housing developers, community-based organizations like SAGE,” Pastor said.

At times, audience members did not hesitate from attempting to participate in the debate as well. When Morrison argued that the AIDS Healthcare Foundation — the top donor in support of Measure S, responsible for 98.8 percent of their funds — was absent from the Hollywood community plan meetings, other panelists mentioned that there was a representative in the audience.

Wyatt Duncan (sophomore) is a student in the Third Los Angeles class, and one day hopes to be a developer. To him, the panel demonstrated the tension surrounding housing in Los Angeles.

“There is this profound clash between those who have seen gentrification rear its ugly head and want to slow down LA’s transformation, and those who feel transformation and progress in LA are necessary and important to the city,” Duncan said. “It really struck me how passionate the conversation became, especially between Goodmon and Pastor.”

The series will continue to address LA’s transition from a post-WWII, privatized suburban city.

“What makes LA different from other big cities at this moment is that so much is up for grabs,” Hawthorne said. “The city is really redefining itself and it is hashing out, in many ways, the basic elements of its civic identity.”

The series has three more events. The next will be a discussion between Christopher Hawthorne and recently re-elected LA Mayor Eric Garcetti March 22.