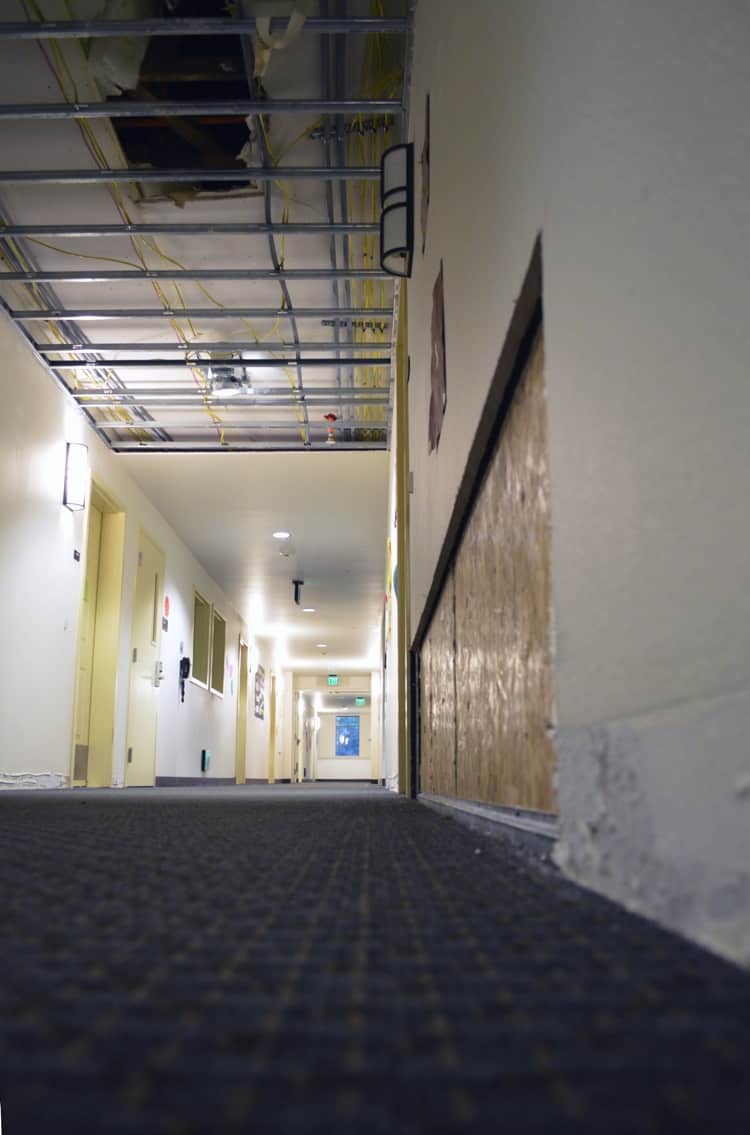 Berkus Hall residents were forced to evacuate the morning of Jan. 25 due to flooding caused by a pipe that burst during an annual sprinkler test. Campus Safety stopped the flooding within five minutes by shutting off the building’s water line, according to Residential Education and Housing Services (REHS) staff. Tower A was most impacted by the flood, with waterlogged floors, water dripping from ceilings and water damage to residents’ possessions. Two weeks later, many students remain unable to move back in and are currently living in vacant rooms across campus, including in first-year residence halls such as Braun.

“When the company was filling the sprinkler lines back with water to test them, an elbow on one of the pipes blew out, causing the flood,” REHS staff said via email.

This is not the first time that Berkus has been affected by flooding, Residential Advisor (RA) Elizabeth Bushong (junior) confirmed. Sept. 16 last semester, a sprinkler pipe burst on the first floor, causing damage to REHS offices.

REHS became aware of the issue when the fire alarm system went off and students began to evacuate. The residents forced to evacuate said water was coming out of the lights and vents in the ceiling.

Once Campus Safety cleared Towers B and C at around 9:30 a.m., residents were permitted to return to their rooms. However, residents of Tower A, where the flooding resulted in more damage, were required to remain outside of the building for longer.

Berkus Hall Tower A resident Kerensa Nagle (junior) was in class at the time of the flooding, which she found out about when she received a text from her roommate. Nagle missed the rest of her classes that day to manage the situation.

When she returned to her room, the flooding had mostly stopped, but the floor was soaked and water was still dripping from the ceiling. Nagle said she lost her notes for her senior comprehensive project to the flooding along with valuables, clothing and memorabilia.

REHS Director Chad Myers is working with students affected by the flooding to compensate them for personal property damage. He asked that students create a comprehensive list of their damaged items and their values so that the college can propose a settlement.

REHS initially told Nagle to pack belongings for the next few days, but later notified her and her roommate that they had to move everything out of their room, as the damage was worse than they thought. Since Feb. 1, contractors have ripped out the walls, ceiling and carpet of her old room — all of which will have to be replaced.

For the past week, Nagle has been living with her roommate in a new room assigned by REHS, where they will be staying the rest of the semester. With her busy schedule, Nagle has had no time to readjust. Her belongings remain unpacked since the move.

“I didn’t have time to process the fact that it happened until the next night because we had so much to do to deal with the flood,” Nagle said. “I was overwhelmed when it finally hit me.”