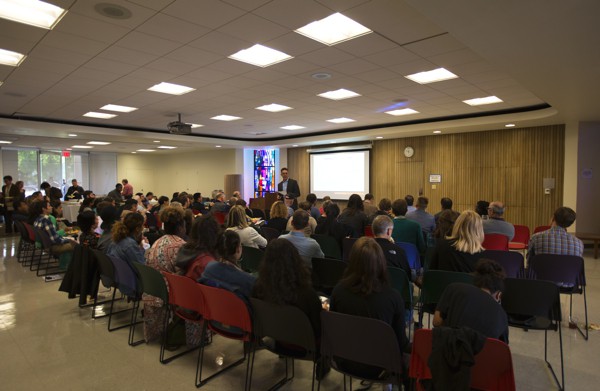 This week, Occidental joined the ranks of dozens of colleges and universities across the country that have declared themselves sanctuary campuses in the wake of Donald Trump’s election. During a meeting Dec.1 where students, faculty and administrators were present, faculty voted to designate Occidental a sanctuary campus and reached an agreement with the administration that the College’s definition of the term will be outlined by inauguration day Jan. 20, 2017. Two weeks prior to the meeting, Diplomacy and World Affairs Professor Movindri Reddy sent a letter signed by 148 faculty and staff to President Jonathan Veitch Nov. 18 requesting that Occidental protect its students, staff and faculty of marginalized identities who may be targeted by the new presidential administration.

“At the faculty meeting, many faculty expressed that we should look into options even if federal funding could be endangered, putting the importance of student lives before money,” Zoe Foster-La Du (sophomore), who attended the meeting, said. “Others felt that it was too complicated of a matter to decide within the meeting. Since these complications arose, the faculty did not give a specific definition of a ‘sanctuary campus.’”

At many sanctuary campuses across the country, including all schools within the University of California system, the declaration implies that universities will not comply with federal immigration authorities. Yet, definitions of “sanctuary” and the parameters of its scope remain unclear. Different interpretations of the term at various universities have resulted in commitments ranging from symbolic support for all marginalized students to active resistance against immigration authorities.

Diplomacy and World Affairs Professor Anthony Chase claims that at Occidental, sanctuary could entail prohibiting local police and Campus Safety from investigating or enforcing immigration law on campus and offering specific scholarships to Deferred Action for Childhood Arrivals (DACA) students. DACA offers eligible undocumented immigrants the ability to postpone deportation if they meet certain requirements — coming to the U.S. before their 16th birthday, for example.

In an email sent to the campus Dec. 2, President Veitch said that Occidental would not voluntarily assist government agencies in enforcing immigration regulations. Chief Diversity Officer Rhonda Brown said that the administration is taking time to work out a definition of sanctuary because they want to select one that will stay consistently relevant throughout President Donald Trump’s years in the Oval Office.

“I think some folks are reading the slowness in making a response as non-committal, non-caring. But it is more that we just want to know what it is that we’re saying yes to so that we can consistently say yes,” Brown said. “Because whatever we say yes or no to, that’s what we’re committed to for four years.”