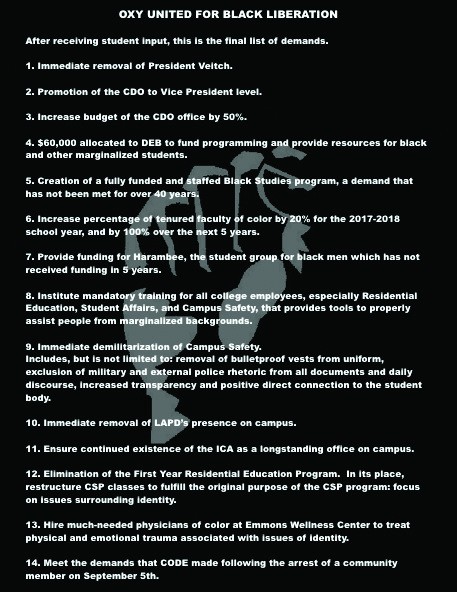 The first demand on the list was that President Veitch resign from his post. This demand was not met, as the Board of Trustees voted unanimously to uphold Veitch’s presidency.

“I believe that was a killing point,” Brown said. “When we didn’t meet that, I think a lot of people lost faith.”

Oxy United’s website states that the organization considered this demand the most important, and that the other demands only address symptoms of the poor leadership that they believe Veitch provides.

“Veitch is not prepared to speak to the pain of the students,” Abhilasha Bhola ’16, a leader and organizer within the Coalition for Diversity and Equality (CODE) last year, said.

The second and third demands, asking for the promotion of the CDO to vice-presidential status and the increase of the office’s budget by 50 percent, were granted. The fourth demand called for $60,000 in funding to be provided to the Diversity and Equity Board (DEB) by the administration; instead, the student body voted to increase their annual fees to provide the funding.

Newly hired professors Courtney Baker and Erica Ball of the American Studies department are leading a proposal for a fully funded and staffed Black Studies program, the fifth demand on the list.

The sixth demand called for a 20 percent increase in tenured faculty of color by the 2017–2018 school year and a 100 percent increase within five years. While the college is on track to complete the first part of the demand, Brown said that to expect a doubling in tenured professors of color in five years is unrealistic as a result of the implausibility of hiring tenured faculty at such a rapid rate.

The seventh demand was that black student group Harambee receive funding; the group is now affiliated with the Intercultural Community Center (ICC), which assigned them a programming budget. In accordance with the eighth demand, Residential Education and Housing Services, Campus Safety and Student Affairs have undergone training on how to better serve marginalized students, with more training still to come.

The ninth demand called for the demilitarization of Campus Safety, with specific reference to the removal of bulletproof vests from uniforms. A town hall on the subject was held in March 2016 that was open to the entire Occidental community, where attendees voted in favor of keeping the vests, and so they remain, albeit worn under clothing. Brown admits that not many students attended this town hall, so this decision may not sit well with many.

The administration agreed to fulfill the 10th demand, removing the Los Angeles Police Department (LAPD) presence on campus, but this demand was not met immediately after the occupation as many students wanted. At the time, the LAPD had a contract to use the Rush Gymnasium for physical training while their usual location was under repair, which is why they had such a regular presence on campus. They remained on campus until the expiration of their contract in March 2016, four months after the occupation.

The 11th demand was for the administration to ensure the security of the ICC; they responded by doubling the ICC budget. The 12th demand, calling for the elimination of the First Year Residential Education program (FYRE), is in progress — FYRE was scrapped for the 2016–2017 school year, and faculty and administrators are working on a new program that focuses on identity and diversity issues, set to be implemented in fall of 2017.

Emmons Wellness Center addressed the 13th demand, the hiring of physicians of color, by hiring therapist William Jones, who began work this fall. Jones is not a physician as specified in the original demand; there are currently no full-time physicians of color at Emmons.

The 14th demand concerns Campus Safety policies and protocols and is linked to the ninth demand regarding their demilitarization. In response to complaints against protocols in both demands, several actions were taken. The Campus Safety Advisory Committee (CSAC) was created in December 2015; Campus Safety officers have changed their dress code to appear less militarized and more casual, as well as beginning a ride-along program to encourage transparency with the student body and an online complaint form for the department is currently being developed.