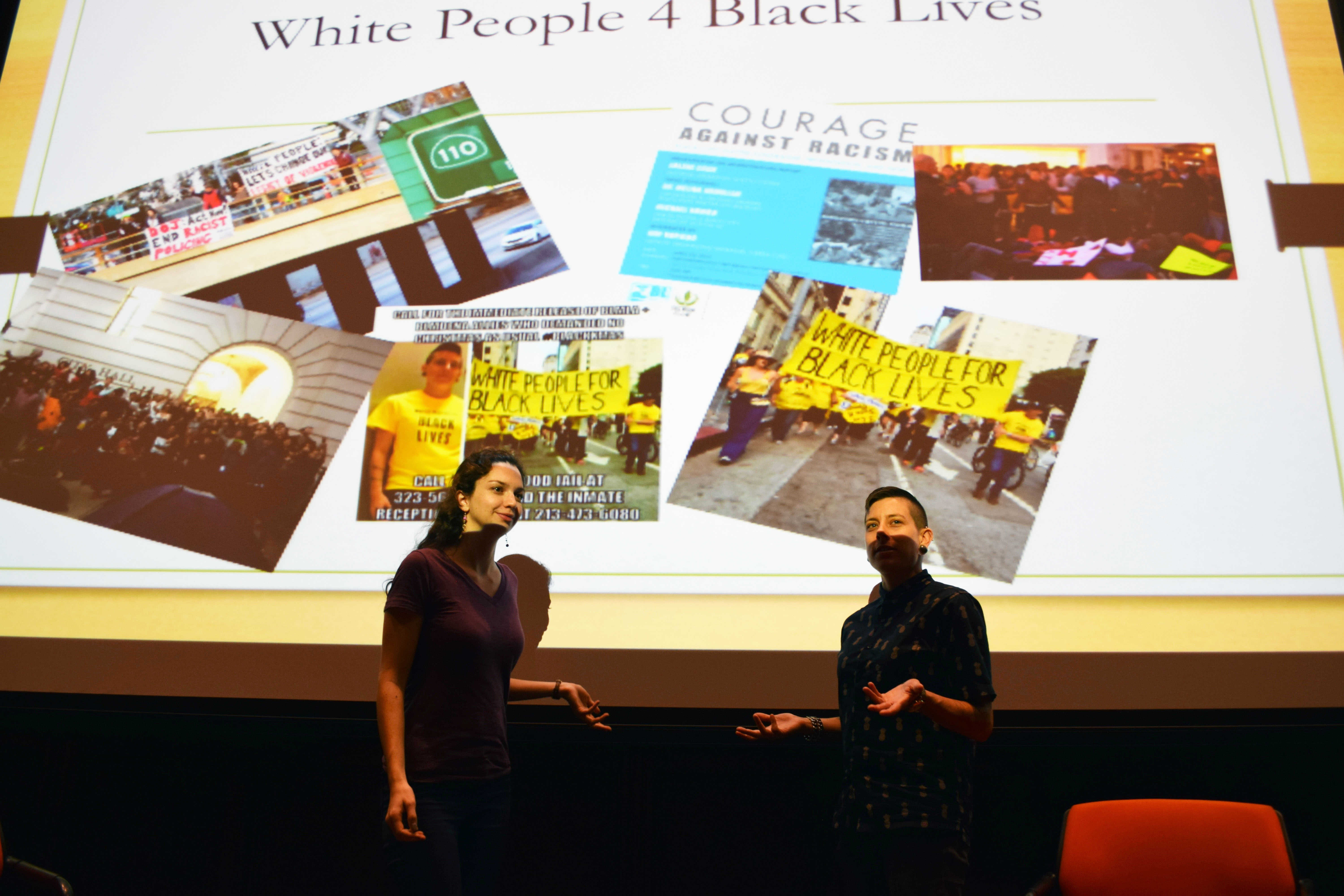 At a time when many Americans are grappling with the violent realities of racial injustice, the role of white people in the fight to end racism is still a contested one. As a result, white anti-racist collective White People 4 Black Lives (WP4BL) facilitated a workshop in Choi Auditorium Sept. 20 that encouraged the 10 students in attendance to unpack their white identities and interrogate whiteness in American society.

“The goal of white affinity spaces across the country is to have white people work to hold other white people accountable so that the work of [fighting white racism] isn’t putting undue burden on people of color,” Dahlia Ferlito, a founding member of WP4BL and one of the leaders of the workshop, said.

Both Ferlito and their co-facilitator, Occidental alum Mikayla Branz (‘15), asked students in attendance to question how their intersecting identities shape the way they see the world. Branz and Ferlito also stressed the importance of anti-racism, a practice that assumes an active stance against systematic oppression. Student activists Haarika Reddy (senior) and Flynn Aldrich (junior) helped to co-organize the event.

“Students of color at Occidental have been advocating for justice through an intersectional anti-racism framework for years,” Reddy said. “This perhaps is a culmination of that in terms of trying to get white folks on board and to engage in action taking.”

Reddy previously helped organize an event called Undoing Racism alongside Ben Weiss (‘16) last November during Unity Week, a series of programs that emphasized multiculturalism. After the occupation of the Arthur G. Coons administrative building in November, as well as after the formation of CODE White — a white student group working with the Coalition at Oxy for Diversity and Equity (CODE) — some white allies decided their role on campus should be a supportive one, intended to collaborate and take direction from student activists of color.

“One of our major roles as white people in this movement is to change the hearts and minds of white people we know who are struggling to reconcile what they thought was a meritocracy with what they are now realizing has always been a system of white supremacy,” Branz said. “This can be a painful realization, so it’s constructive when we support each other without expecting people of color to comfort us.”

With instances of police brutality making headlines almost weekly, WP4BL and other organizations within the national white anti-racism network of Showing Up for Racial Justice (SURJ) are attempting to encourage white people to take an active role in combatting racial violence. In many cases, this involves partnering with organizations led by people of color, such as Black Lives Matter, to address the needs of the organization. In addition to planning direct action, WP4BL co-facilitates ally spaces at Black Lives Matter: Los Angeles (BLMLA) meetings.

During her final year at Occidental, Branz heard about White People 4 Black Lives through the Alliance of White Anti-Racists Everywhere (AWARE-LA) dialogues she had begun attending off-campus. Desiring a connection with white people in the LA community who had spent years confronting their white identities, she decided to become involved and is now a member of the organization’s steering committee.

“I think Oxy has so much potential for white allies to be part of the movement for racial justice,” Branz said. “Our humanity depends on ending racism.”

Katherine Torrey (senior) agrees that white allies have an important role to play as active, thoughtful listeners who understand their privilege. However, she sees both positives and negatives to all-white spaces.