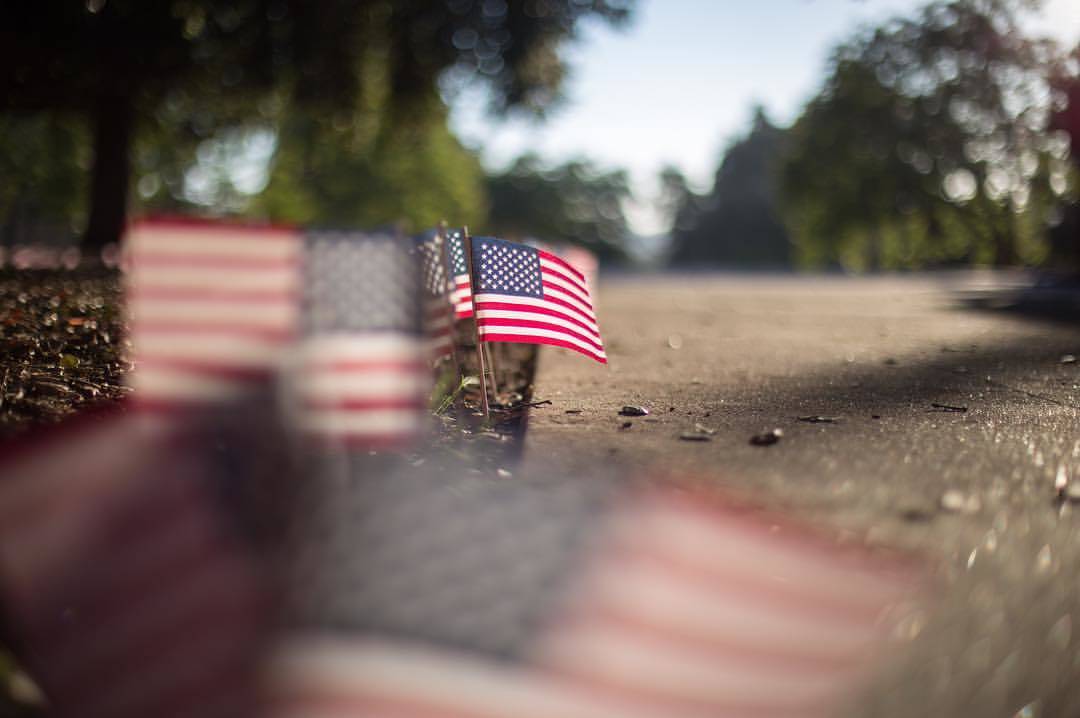 On Sept. 10, 2016, members of the Occidental Conservative Club (previously the Occidental Republican Club) placed 2,997 American flags along the academic quad in remembrance of the lives lost in the 9/11 attacks on U.S. territory. Less than seven hours after being placed in the ground, protesters concerned with the violent history and symbolism of the American flag removed all of them. This action sparked an uproar that resonated internationally.

Protesters removed the flags from the academic quad between the hours of 11 p.m. Saturday and 1 a.m. Sunday while others dispersed flyers memorializing the victims of the Iraq War along with copies of the poem, “Alabanza: In Praise of Local 100.” Although the protesters’ behavior was widely criticized as disrespectful toward 9/11 victims, Protester One* insisted that their intentions were not to disgrace or disregard the lives of those who died on 9/11.

“Our point was to start a conversation within the Oxy community about what it means to memorialize 9/11 in this way,” Protester One said.

At 12:40 a.m. Sunday, Sept. 11, Conservative Club President and Co-Founder Alan Bliss (sophomore) received a text from a friend alerting him of the flags’ removal. He then ran from an off-campus house with a second friend to the quad, where they arrived to find the flags in surrounding trash cans and flyers throughout the quad. Bliss’ friends wished to remain anonymous.

Upon their arrival to the quad, Bliss recounted that he and his friend were approached by three student protesters. Upset, Bliss asked the same friend to call Campus Safety. According to Bliss and other members of the club, Campus Safety officers arrived on scene to document the situation, fill out an incident report and record names of those present. The officers then left the quad to resume regular patrol of campus.

Despite allegations that the students responsible have yet to be identified, Protester One confirmed that this is false.

“We immediately approached Campus Safety when we saw that they showed up, so at absolutely no point did we try to conceal our identity as the people who did it,” Protestor One said.

The club first announced their intentions of putting up a memorial at 4:09 p.m. Friday, Sept. 9, when Oliver Killeen (sophomore), the club’s political education chair, sent an email to the class listservs. The email contained a brief description of the 9/11 memorial flag-placing ceremony in the academic quad that would occur Sept. 10 at 5 p.m.

When the ceremony began, only Bliss, Vice President and Co-Founder Max Woods (sophomore) and two or three other students unaffiliated with the club were present. Bliss and Woods said at one point their group of supporters included as many as 10 to 20 students.

Bliss and Woods recounted that by 7:30 p.m., after they had finished setting up, the group dispersed. They confirmed that between 1 and 2 a.m., a group of 15 to 20 students collaboratively worked to restore the memorial. Based on Bliss’ and Woods’ accounts, many of these students were friends of theirs, though not necessarily affiliated with the Conservative Club. According to Jared Bricklin (sophomore), a witness who helped reconstruct the memorial, Woods sent an image via Snapchat showing American flags in the trash that mobilized several of these students.

According to Woods, he and a few friends remained at the memorial from 2 to 3:30 a.m. to guard it. Then, around 3 a.m. another group of students arrived and began snapping flags, but retreated when Woods confronted them. Protester One denied that anyone associated with or knowledgeable of the initial protest returned.

In an email addressed to the college community Monday, Sept. 12, Acting Dean of Students Erica O’Neal Howard confirmed that the Office of Student Conduct is following standard procedure to investigate the incident as a violation of the Code of Student Conduct.

Over the summer, after learning about the Young America’s Foundation (YAF)’s “9/11: Never Forget Project,” the club began to plan their memorial. YAF, a conservative youth organization, sponsors such 9/11 memorials on college campuses. Bliss registered the event with the Office of Student Life (OSL) Aug. 31 and reserved the academic quad for their memorial.

According to OSL’s standard procedure for event registration, a program assistant reviews proposals to ensure that there are no logistical issues. If additional action is required, proposals are sent to the Campus Event Advisory Committee (CEAC).

“In hindsight, I would have had them meet with the CEAC so that we could get a sense of how people might possibly react to this memorial and give them an opportunity to possibly prepare for that,” Dean of Student Life Tamara Himmelstein said.

Bliss contacted YAF in preparation for the memorial, subsequently receiving 2,977 American flags and a sign that read “9/11 Never Forget Project.” The club will repay YAF out of pocket and is attempting to apply for retroactive funding from the Associated Students of Occidental College (ASOC).

“The flag was used solely to represent a life. And so I connected flag and victim,” Spearman said. “I did not place any other symbolism, good or bad, with the flag other than simply, you know, a national horror.”

The protesters perceived the flag differently.

“I see the American flag as a symbol of genocide, of rape, slavery, and police brutality,” Protester One said. “I don’t think it’s right. I just don’t think it’s appropriate to use [the flag] to symbolize the lives lost in 9/11 … You’re assuming everyone there was an American. I can speak to the diversity of New York City as a person who’s from New York and was there at the time that [9/11] happened. I will guarantee you that a significant number of those people were not full citizens and were struggling with citizenship. Typically we memorialize people with flowers…with less politicized, less contentious symbols, and I think that needs to be taken into account.”

Killeen said that from the perspective of the Conservative Club, the American flag represented every victim of 9/11 regardless of whether or not they had a green card, passport or social security number.

“The people who died in the 9/11 terrorist attacks should be considered American in the sense that they sacrificed [their lives in representation of] this country,” Killeen said. “The representation of those [whose] lives [were] lost as Americans is really fundamental to the memorial in itself.”

A handful of small conservative media sites immediately picked up the story of the flags’ removal from the club’s Facebook page on Sept. 11. However, in the days that followed, it gained traction nationally: Time Magazine, The Washington Post, CNN, the Los Angeles Times, FOX TV, ABC networks, and many others covered the story.

In the days following the memorial, student protesters, supporters and other individuals were bombarded by threats of violence, hate speech and racist slurs via Facebook, email and other platforms.

“We are working with the college and consulting with LAPD regarding any complaints of threats made via the Internet, via phone, or via mail,” Chief of Campus Safety Victor Clay said.

Woods stated that the Conservative Club, in recognition of the anger present on social media, attempted to manage the responses to the posts on their Facebook page. However, their one student moderator, who wished to remain anonymous, was overwhelmed by the magnitude of the comments.

“One thing that I want to make clear is that the Republican Club does not condone any violence, any racist remarks or death threats. That’s not what we stand for, and I think that’s just disturbing in itself that people would do this,” Woods said. “I just want to let Occidental know that we did try our best.”

In response to the incident, campus organizations issued statements alternatively supporting, justifying and explaining the protestors’ actions. The first response was issued by the Coalition @ Oxy for Diversity and Equity (CODE) on Sept. 11 at 1:25 p.m. The post highlighted students’ distress, the triggering nature of the display, the history of the American flag symbol and confusion regarding the Conservative Club’s original email and intentions. Originally, the post included a list of students signing their names in solidarity. However, these names were removed sometime after CODE’s statement was shared by the Oxy United for Black Liberation page.

The Diversity and Equity Board (DEB) issued two statements. The first, shared Sept. 12 at 5:54 p.m., expressed concern that the Occidental administration’s response to memorial desecration had not been consistently or equitably applied in the past. The second DEB statement, shared Sept. 14 at 6:04 p.m., related how the Conservative Club had refused to meet with DEB in a standardized setting that week. DEB called for the administration to respond to the Conservative Club’s moderation of the Occidental College Republican Club Facebook page.

In response to DEB’s second statement, Bliss said via email that the club did not consider it appropriate for DEB to release a statement before the administration’s investigation closed.

Protester Two expressed that they themself do not regret their decision to protest the use of the American flag even though the incident has been in the spotlight, placing student protesters in a precarious position both within the campus community and in the broader conversation.

“In hindsight, I don’t think that it was a bad idea because it is to the point at this school that where people are always talking about dialogue, dialogue, dialogue,” Protester Two said. “But when you already feel powerless and the only way to get people’s attention, to get them to notice something that is f—– up and for them to change, is to do something that gets their attention. That’s what you have to do.”

“While Campus Safety was first on the scene when the incident was reported at 1 a.m. Sept. 11, we’re not taking the lead role in the investigation,” Clay said via email. “We’re not in a position to discuss any of the details because we don’t want to do anything to compromise the investigation, which is ongoing.”

*Protesters’ identities are being kept anonymous due to safety concerns.