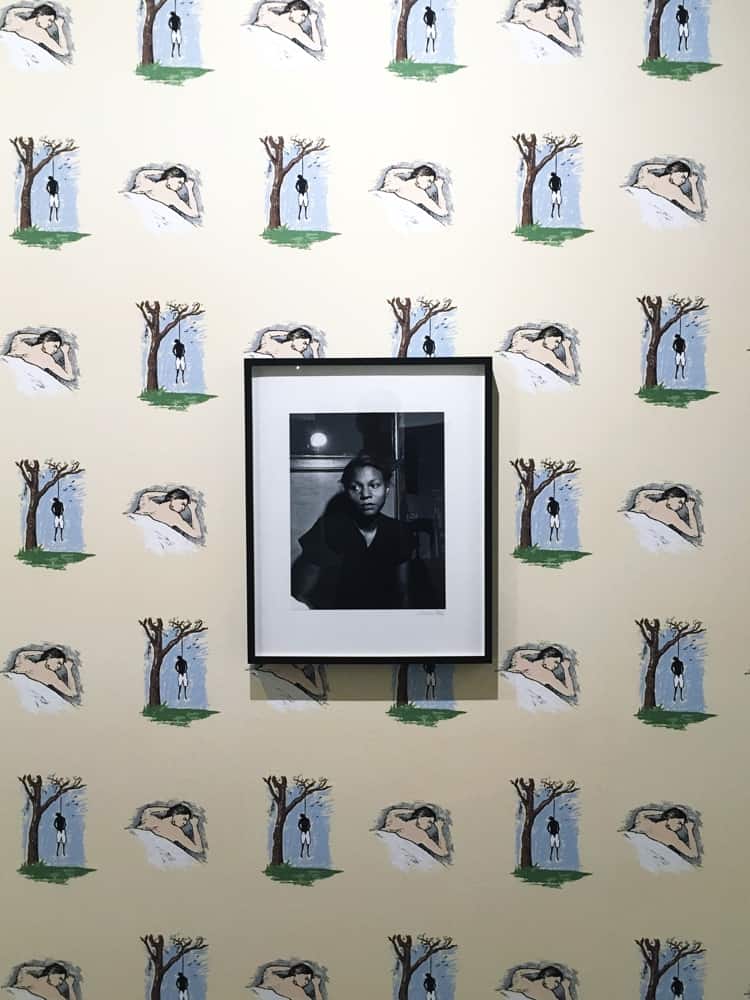 Tucked between a convenience store and a liquor shop, the Underground Museum is not where one would expect to find art. But the location of the museum was no accident to the late Noah Davis, artist and the museum’s creator. Located in the working class neighborhood of Arlington Heights, the Underground Museum blends into the rest of the street as if it were another “mom and pop” storefront.

The museum displays contemporary visual art and deals with the complexities of love and hate, with many works depicting violent brutality against black bodies. One mural uses cartoon-like imagery to depict heavy topics such as slavery. There is large variation in the type of art, with paintings, photographs and artifacts, but they all serve to make the viewer reflect on race and power.

“The work is a love letter not just to black people globally, but to their perseverance,” Megan Steinman, curator of the exhibit, said.

The space is unimposing and welcoming. Its laid-back mood pairs well with the casual character of the neighborhood. Justen LeRoy, the exhibit’s liaison, believes that its location gives it a power that other museums do not have.

“We wanted to present art to the people, understanding there was nothing [art-related] around here,” LeRoy said.

LeRoy described the reality for many people in the area as being one of exclusion. He explained that many Underground Museum visitors expressed previously feeling unwelcome in formal institutions of art, because of the cost of attendance and attitude of other museum goers. LeRoy, who has worked in commercial art exhibits prior to the Underground Museum, felt a similar unwelcomeness.

“Working at more commercial places, there is a performance. People get just as cold as the environment they are in,” LeRoy said.

The Underground Museum, he said, is anything but cold and closed off.

“It reminds everyone where we are as a society, where we’ve been and what we have to do, but overall [it is about] hope,” LeRoy said.

This museum aims to fill the gap that exists between the public and art. The Underground Museum does not have velvet ropes or glass chambers encasing the art. Rather, the installations are intended to be experienced up close and personally. Steinman recounts Davis’ vision for the museum: that art must be absolutely accessible. Unsurprisingly, when people enter the museum, they feel comfortable knowing that the space is designated for them.

The last stop on the museum’s path is a meditation garden, where visitors are welcome to meditate, picnic and enjoy the space. It is here that visitors are encouraged to reflect on their experience in the museum. LeRoy said it is not uncommon for museum goers to lose themselves in the garden for hours on end.

“As soon as people enter the space, they realize it is more than just art,” LeRoy said.

Gustavo, who did not feel comfortable sharing his last name, represents the museum’s ability to connect with local residents. He runs a convenience store down the street from the museum and frequently sees people walking past his shop to visit it.

Steinman hopes to see more of the neighborhood come to the museum.

“Our mission is to bring art out of storage and into relationships with people,” Steinman said.

She described the exhibit as a conversation with Noah and the other artists. The art deals with deeply personal and political topics.

As much as the space is meant to be one of healing and inclusion, Steinman believes that the art should also serve a role of reflection for the visitors.

“I would like that everyone coming in be taxed as a critical thinker and that the ideas of the exhibit be reflected in their own lives,” Steinman said. “I want to ask people to think.”

Just as the museum occupies a physical space in Arlington Heights, it also manifests itself in a mental space of each visitor. Patrons of the museum enter into the mind and experience of the artists who present a sometimes painful story. Blackness, whiteness, womanhood and masculinity are present themes in the art. Within this engagement, there is an unspoken openness about the exhibit.

“We leave it up to you to decide what the show is about. Is it hate, love, birth, death, race, resistance, perseverance, religion or family? Is it Black America’s relationship with all of these concepts, and more?” reads the introductory text at the atrium of the museum.

The Underground Museum evokes a clear message of inclusion, but also permits a large amount of interpretation. There is a mix of terror and soul with regards to representing the reality of many people who lived within it. For LeRoy, this exhibit changed how he views art. With simplicity and accessibility, the Underground Museum strives to empower transformation through art.

The museum is free and open from noon to 7 p.m., Wednesday through Sunday.

Love art? Email us at Weekly.oxy.edu or Tweet us @OxyWeekly.