Home Features Paying for it: Student debt can feel paralyzing, but it does not... 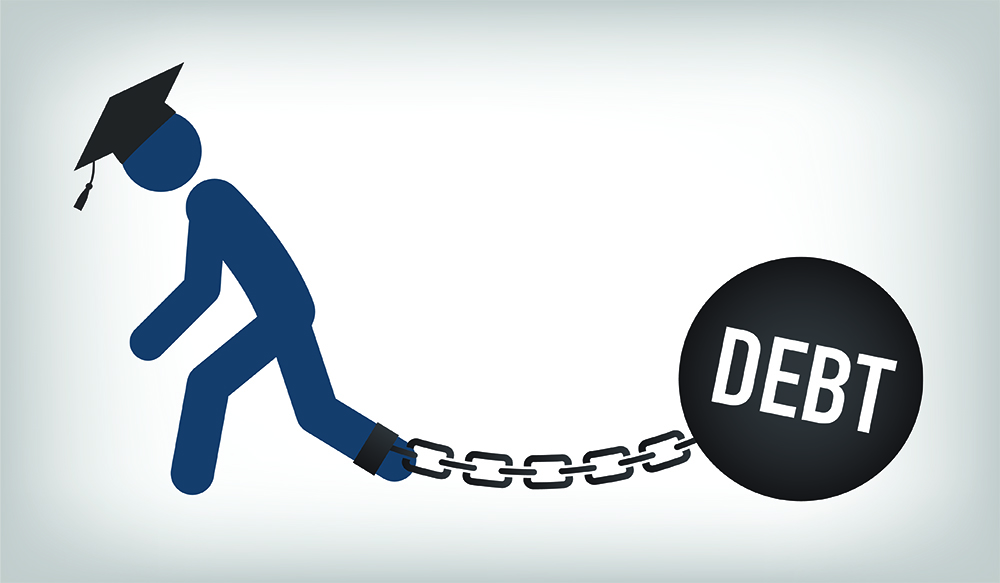 “I want to run away,” Juliah Lee (senior) said.

Lee wants to run away because she would rather do that than deal with the burden of student debt. While said jokingly, an undertone of seriousness rang in her statement on how she plans to handle her student debt post-graduation. The sunny Southern California day was at odds with the story she had to tell. An Orange County native and first-generation college student, Lee’s debt, accumulated from various loans, hovers in the range of tens of thousands of dollars.

“I’m hopeful that something will work out before the interest starts piling up,” Lee said.

Student debt is a familiar experience for college students in the US. According to the Federal Reserve, at the end of 2018, Americans owed over $1.57 trillion in student loan debt. This is an increase from the $1.49 trillion owed the previous fiscal year. In 2018, 69 percent of US graduates took out loans, and they graduated with an average amount of $29,800 in debt. In California specifically, nearly 50 percent of the student population has debt, the average equaling $22,785. The state ranks 46th in the nation when it comes to the amount of student debt. Connecticut ranks 1st with an average student debt of $38,510, according to data from the US Department of Education.

The distribution of debt across the US does not fall equally on every student. The student debt burden falls disproportionately on students of color. In 2012, the public policy organization Demos found 86 percent of black and 87 percent of Hispanic or Latino students at private non-profit institutions graduated with debt. Since then, little has changed. Director of Financial Aid Gina Becerril reported 55 percent of Occidental’s 2018 graduating class borrowed loans, the average amount equaling $32,000.

“While $32,000 sounds like a lot of money, when you think about the cost of attendance … that’s a pretty good amount of financial aid,” Becerril said.

To Becerril’s point, attendance at Occidental costs $70,000 annually and $280,000 over four years. The National Association of Colleges and Employers reported the preliminary average starting salary for 2018 graduates was $51,022. Thus $32,000 in debt is significant.

At the state and local level, programs and promises for solutions exist. Michigan Governor Gretchen Whitmer proposed a debt-free college program Feb. 27 that includes free community college for high school graduates, a scholarship of $2,500 for those attending nonprofit or public four-year schools to put toward tuition and the implementation of various scholarship programs, among other things. New Jersey is taking a similar lead by offering tuition-free community college through a program called the New Jersey Community College Opportunity Grant. The state is chasing a goal of having “65 by 25,” meaning the government intends to have 65 percent of the state’s adult population earn a post-secondary degree by 2025. To achieve this goal, New Jersey legislators proposed lessening the burden of college by significantly reducing its cost.

In Congress, Senators Elizabeth Warren and Bernie Sanders are proposing initiatives to create options for students to pay for college that do not require taking out loans, such as making public college free and refinance options. The National Association of Student Financial Aid Administrators (NASFAA) tracks developments on the student debt crisis, including how legislators are taking measures to mitigate this issue.

There are other non-government organizations, putting effort toward creating a debt-free America or making “promises.” These promise programs started in 2005 when an anonymous group of donors gave enough money to pay for the college tuitions of every student in the Kalamazoo Central High School district in perpetuity. These “Promise Programs” have since popped up across the nation and have further inspired the free college movement. National organizations like the Campaign for Free College have created petitions and track developments by states in their push to end the problem of student debt.

Occidental does not have a “Promise Program,” nor do inklings of future legislation change the situation of the financial aid office or current students. Claire Krelitz (senior) came to college knowing she would have to take out loans.

“It was one of the things that I didn’t really prepare for,” Krelitz said. “I think that because it’s been normalized in a way. You look at the number of cumulative student debt in the US and you say to yourself, ‘Oh this is a very normal thing that people take on.’ So my first year, I definitely didn’t think too much about it and wasn’t worried about it because it was this thing that across the country was part of the reality of attending college in the US.”

Her attitude changed her sophomore year when Krelitz looked at the numbers and realized her loans were something she needed to start paying attention to. However, the most surprising part of the process was how little conversation there is on campus about loans and finance.

“It almost feels like the only capacity it comes up in is when some people joke about it,” Krelitz said. “It doesn’t seem like there’s that much of a concerted conversation about it where people are talking about strategies, helpful information, tools or workshops.”

While the work of organizations and lawmakers is essential, solving the student debt crisis begins at the individual level. Understanding the inner workings of personal finance can make a difference when it comes to knowing how to do something like balancing a budget or, more importantly, picking which loans to take out. In a recent study by Raddon, a private American financial group, nearly 44 percent of study participants said they were very financially literate, but in the end, only 6 percent were able to pass a basic finance test. Eighty-four percent of Americans have never taken a financial literacy course, indicating a significant lapse in individual financial literacy. Becerril is aware of this problem.

“What we currently do is when the loans are offered to the students directly, initially they take online counseling,” Becerril said. “Students go through a program that provides information about the loan. The student has to read it online and go through exercises to understand what being a borrower is. When students graduate or even take a leave, they have to complete an exit counseling [session] that tells them what’s going to happen when they need to start repaying their loans.”

While this educational program is a key step, there are Occidental students who go through the loan-education program who still feel unprepared. Lee expressed regrets with her initial management of her financial situation at Occidental.

“I would have been more assertive with the financial aid office and just said, ‘This is what I can and cannot do,'” Lee said. “I should’ve branched out and looked for more resources either on or off campus.”

Krelitz shared similar concerns about the lack of understanding among students when it comes to personal finance.

“Financial literacy is not something people around here want to talk about. There’s not a casual dialogue,” Krelitz said.

“We want to go beyond this online counseling because we don’t think it does good service to the students,” Becerril said. “You can easily skim through it and not really understand what it’s telling you.”

The information and services offered partly rely on students, who need to be willing to talk about student debt issues and seek out help.

“Throughout my years here we’ve tried to establish financial literacy workshops,” Becerril said. “These weren’t being successful; students weren’t attending. We’ve been trying to figure out who we can partner with and how we can institute a financial literacy program.”

What Students Can Do

Many options exist for students with loans. Working for the government or a nonprofit post-graduation qualifies students with federal loans for the Public Service Loan Forgiveness Program. This program forgives the remaining balance of students’ direct loans after 120 months of work. Student Loan Deferment gives students the option to temporarily stop paying their federal loans or reduce their pay rate. There are also a variety of Income-Based Repayment Plans that factor in a borrower’s income and then create a plan of payment that reflects that number. Student Loan Consolidation, another option for federal loan users, combines an individual’s loans and fixes one interest rate to the loans being consolidated.

Federal student loans are not the only loans out there. There are a variety of other private loans that offer flexible interest rates and repayment terms. These loans, however, do not come with the same programs and protections as federal ones.

Helen Andrews, a Ph.D. student at the University of Washington and an Occidental parent, says students should know a few key things when taking out loans. Andrews’ research focuses on financial literacy education.

“Know that when you borrow, you have to pay back,” Andrews said. “Plan accordingly. The best thing students can do is educate themselves as best they can. Students should keep asking questions until they understand exactly what options they have. Also, keep in mind that the system does work for most people. You still want to understand it, though, so get good information online, talk to the financial aid office and really know what your plan is going to be.”

Andrews emphasized that standard repayment options do not always work for everyone.

“Understanding repayment options is something you can do for yourself,” Andrews said.

While the process of taking out loans and understanding the implications of that can feel daunting, there are policymakers in education and the government actively finding solutions to this crisis.

“There are a lot of good researchers working on this issue right now,” Andrews said. “That’s really encouraging because it’s too important of an issue.”