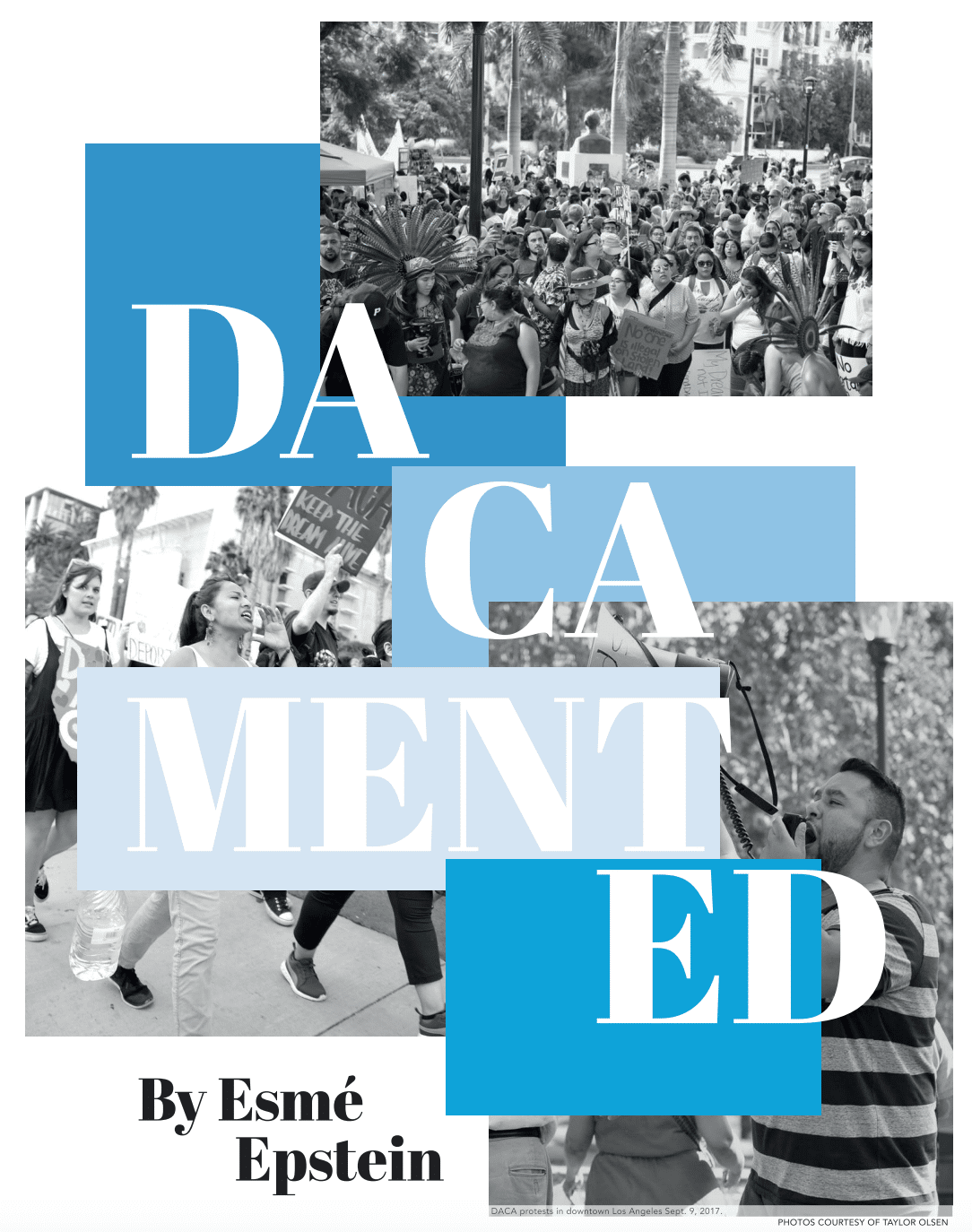 Mass deportation of illegal immigrants, proposed by President Donald Trump, would leave many enclaves of immigrant neighborhoods in Los Angeles deserted. Pew Research Center estimated in 2017 that the city is home to around 1 million immigrants who are here illegally. According to a report by the United States Citizenship and Immigration Services (USCIS), around 14 percent of them are Deferred Action for Childhood Arrivals (DACA) recipients. DACA, an immigration policy established by the Obama administration, allows individuals who arrived in the United States as minors and remained in the country to apply for a two-year renewable deferred action immigration status. DACA has been under scrutiny by the Trump administration since January 2017. However, efforts are being made at the state and local level to protect these individuals from deportation. At the collegiate level, institutions are utilizing close-knit student communities to inform and protect those who are directly affected, including students themselves. From carpooling to city protests to the streaming of informative documentaries, DACA has remained an important part of the conversation at Occidental.

The same day that Trump said DACA was unconstitutional under the executive power Sept. 5, 2017, Occidental College President Jonathan Veitch issued a statement of support for DACA to the Occidental community.

According to the statement, Occidental’s Sanctuary Campus Faculty Councilwould continue to take appropriate steps to ensure that all members of the college community, regardless of their background, would have the full support of the college.

The University of California’s system president, Janet Napolitano — who served as Secretary of Homeland Security under the Obama administration — and her lawyers brought an urgent appeal to the Supreme Court Feb. 2. Ultimately, two federal judges ordered the administration to maintain major elements of the program, one of which allows people enrolled in DACA to renew their protected status.

Before the Supreme Court decision, Veitch had taken preemptive measures by declaring Occidental College a sanctuary campus Jan. 24, 2017. According to Veitch’s declaration email, Occidental would continue to provide and identify on- and off-campus resources available for community members who are affected by DACA. According to Zachary Solomon (junior), the president of the Associated Students of Occidental College (ASOC), ASOC set aside $5,000 from its discretionary fund to constitute the DACA application emergency fund.

According to Susan Young, director of the Office of Religious and Spiritual Life (ORSL) and a member of the Sanctuary Campus Council, Occidental was one of the many initial schools to declare themselves sanctuary campuses after Trump’s election. These colleges signed a statement of support on Pomona College’s website, declaring that they are going to support all immigrant students and faculty –– documented or undocumented.

Young said that in order for Occidental to declare itself a sanctuary campus, President Veitch was required to create a set of principles that was approved by the Board of Trustees.

According to Young, Occidental hosted representatives from other colleges and universities in the area to discuss what it means to be a sanctuary campus during the Association for Independent California Colleges and Universities (AICCU) symposium March 10, 2017. Following the conference, Veich created the Sanctuary Council. Young, who holds one of the few confidential support roles for students on campus, joined the council to further her knowledge of the college’s role in the process.

“Right after the Trump administration took the action to change DACA, I approached Robert Flot, the Dean of Students, at a meeting and recommended we talk about how we could support students,” Young said.

According to Young, alongside other administrative staff from various departments ranging from Residential Education and Housing Services to Community Engagement, she formed the DACA Working Group that met weekly from Sept. 11 through Nov. 13 to discuss how the Division of Student Affairs could support students with the change of federal policy regarding DACA.

“We prepared a resource called ‘Five Things You Should Know about DACA.’ It was an online resource that we sent to the division of Student Affairs, so if they were approached, they would know how to help,” Young said.

In October, Megan Hemann (senior) asked Residential Education to hold a comprehensive training workshop regarding how DACA would affect students. According to Hermann, it was imperative for her and her fellow residential advisors (RAs) to receive comprehensive education on DACA and immigration policy. She said that if one of her residents approached her, she would want to know how to react.

According to Young, two representatives from the Los Angeles Unified School District led the workshop Oct. 17.

“The impact of DACA was being discussed at that school district, and so some of the staff who are more knowledgeable about not only DACA but the resources provided by the state of California to students that may qualify for DACA did the training for the RAs,” Young said.

A few weeks after the training on Nov. 7, the DACA Working Group hosted their first talking circle, called “The DACA and Immigration Talking Space: A Place to Share, Process, and Heal.“

The talking circle consisted of subcircles where participants could choose to learn about DACA depending on their familiarity with the policy. Young said that one group focused on individuals who were directly affected, either themselves or through close friends or family, and covered more specific details of DACA support networks. The second group provided a general outline of DACA and actions that people could take to help advocate for DACA participants.

“I was in the circle of allies who were sharing a lot of the same concerns students affairs professionals were sharing like how to support students, but also talking through hypotheticals,” Young said.

Educating and informing in and out of the classroom

Professor Raul Villa, the department chair of the Latino/a & Latin American Studies (LLAS) Department, said that when he heard about the news with DACA, he was aware that there may be students on campus who are affected, so he wanted the department to program events that would help spread awareness about the policy.

“The question we [the LLAS department] asked was: How do we make the people [on Oxy’s campus] feel the urgency of this issue?” Villa said.

According to Villa, when he came across a review of “WET: A UnDACAmented Journey” in the Los Angeles Times, he felt he had found the answer. WET, directed by Alex Alpharaoh, is a play following the journey of an undocumented man from childhood. After reading the review, and finding out that the play would be performed in nearby Atwater Village until October, Villa said he knew he had to take students majoring in Latino/a and Latin American studies to see the one-man show.

Villa says the play put the risk of these individuals in context and also evoked empathy for those under DACA. He said the performance was powerful because rather than being a political critique of DACA, it was a person’s story as an undocumented citizen.

After he took the students to the show, Villa brought the show to Occidental’s Campus Feb. 15 in the Mosher Auditorium. According to Villa, the performance had a lighting malfunction which further added to the thematic message of the play.

“[When] politics is infused with creativity, there’s a double hook, because you may understand the urgency of a political issue, but adding an element of creativity, art and expressivity just kinda gives it an overlay that can make it that much more compelling,” Villa said.

Brenda Francia-Jackson (first year) was one of the students who attended the event Feb. 15. According to Francia-Jackson, the play was not exactly what she was expecting, because it didn’t really have an ending to it.

Another movie screening, “America; I Too“, was held in partnership with the Sanctuary Campus Committee and the Coalition for Humane Immigration Rights (CHIRLA). According to Celestina Castillo, director of the Center for Community Based Learning, the documentary focuses on three individual stories of detainment by Immigration and Customs Enforcement (ICE). The screening was followed by a discussion and information session of how students could get more involved with CHIRLA.

“It was exciting to see a strong engagement from the crowd. It reflects the obvious attention that DACA has on many people’s minds,” Castillo said. “It was great to see students interact with representatives from CHIRLA; I think this will build into something greater.” Castillo said.

Francia-Jackson also participated in the DACA rally in downtown Los Angeles Sept. 5 –– the same day as the original Supreme Court decision. According to her, it was something extremely important for her to attend –– even more important than going to her class that day.

Francia-Jackson said that on that day there was a small group of students who distributed signs in the quad and encouraged people to go to the rally. After attending the rally, Francia-Jackson said she had a better idea of the personal connection DACA had on the lives of people aroudn her.

“Even though it [DACA] doesn’t directly affect me, in the sense that I’m not a Dreamer and I’m lucky enough to have American citizenship, it affects me in the sense that people like me are affected, because I am Latina and I have an immigrant mother,” Francia-Jackson said.

In the future, Francia-Jackson said she would like to continue to go to events, like the one-man show, and hear people’s stories and educating herself on the specifics of them.

“If there is something else on campus I’ll probably attend, but if there’s another protest I will definitely want to attend, just because getting off campus is a very valuable way to make progress. It makes a big difference compared to just staying on campus,” Francia-Jackson said.

According to Valerie Lizzárraga, program coordinator for the Office of Community Engagement (OCE), Comparte, a club on campus that works alongside the OCE and in the community, has also incorporated educational programs pertaining to immigration policy in their curriculum.

The club teaches English to the local day-laborer population every Thursday and Friday morning in Pasadena and Cypress Park and works alongside the ACLU to hold Know Your Rights workshops with the workers. Comparte members also translate the rights to English, so if workers are approached by an ICE agent, they know what to say.

Lizzárraga said the Institute for Popular Education of Southern Californiaapproached COMPARTE and asked them to phone bank for Special Order 40, a policy providing specifics on the interactions between the Los Angeles Police Department, U.S Immigration and Customs Enforcement Agency and immigrant communities.

The program coordinator for COMPARTE, Jessica Michell (senior) said the club and the phone banking efforts were a great way to get involved politically and learn more about the experience of individuals affected by DACA.

Light at the end of the subway tunnel: LA Metro adapts to pandemic and reopening