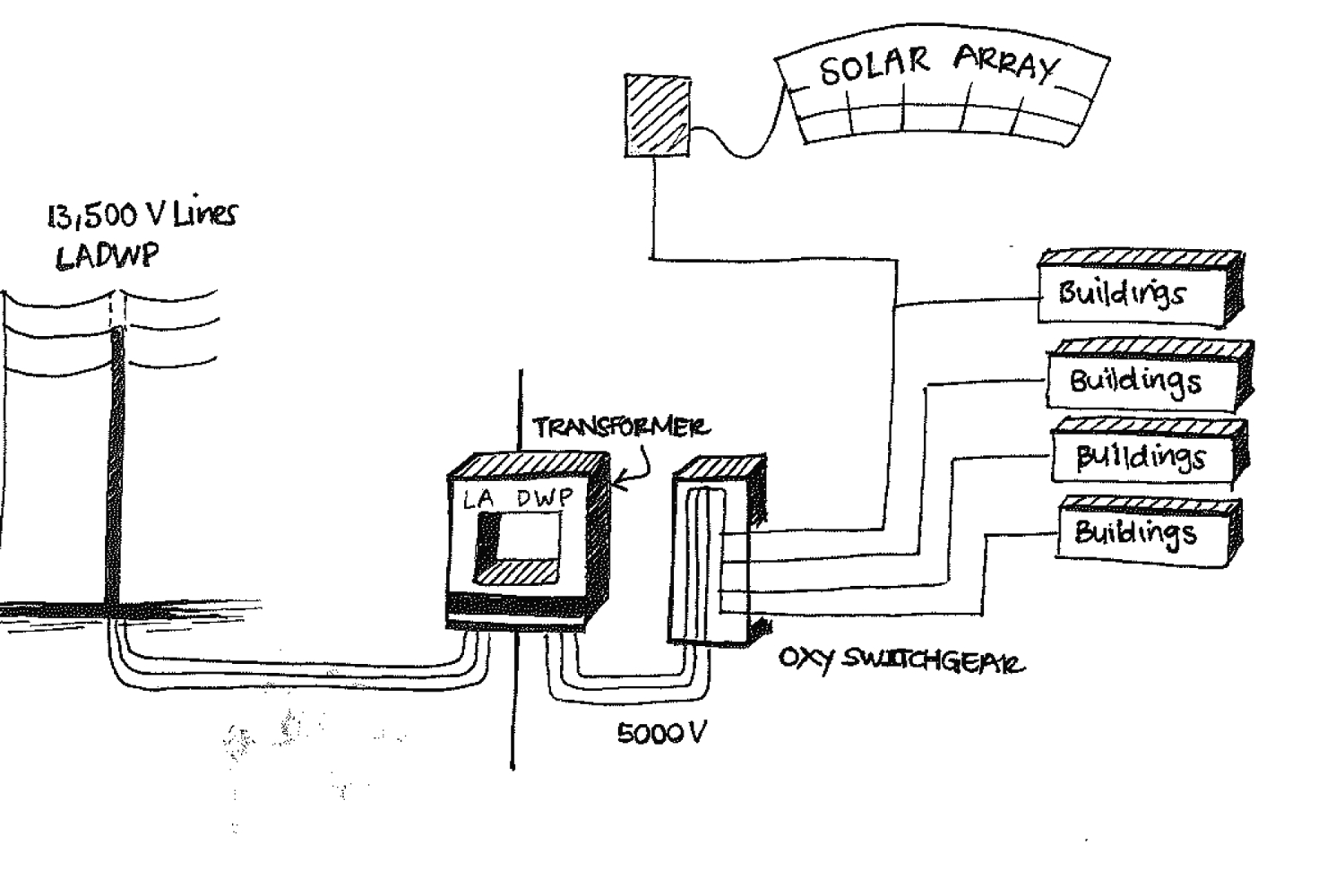 On Saturday, Sept. 2, Occidental students were forced to brave the night without electricity. As most students fled their non-airconditioned rooms to search for friends, charging outlets and food, the facilities department worked alongside the Los Angeles Department of Water and Power (LADWP) to solve the mystery of what exactly caused the outage in the first place. Their efforts continued throughout the night to fix the source, which according to Maintenance and Operations Supervisor Joey Vallas, was a damaged wire in the electric grid.

Occidental College receives its electricity via two sources: LADWP and the solar array that sits on the hills of upper campus, according to Chris Reyes, assistant director of utilities. According to Professor Daniel Snowden-Ifft, over the last three years, the solar array has accounted for around 10.78 percent of the electricity used at Occidental while the other 89 percent is bought from LADWP. Reyes said that power from LADWP is brought to Occidental via three feeder wires which travel above ground on utility poles and are labeled A, B and C.

Within the transformer, electrical voltages can be converted up or down as needed depending on the charge between two points. Specific to Occidental, LADWP sends 34.5 kilovolts to the transformer which then brings it down to 4.8 kilovolts for use according to Reyes. After the transformation, the electricity is sent to the college’s switchgear. Reyes explained that the switchgear distributes the electricity throughout campus via four underground lines.

The distribution wires, the branch wires and the transformer are all under the jurisdiction of LADWP. The switchgear and the wires that extend from it are under the supervision of the college, according to Reyes.

Reyes attributed the conduit line’s failure to the age of the wire and recent high temperatures, saying the line was connected by LADWP awhile back and it may have dried out since then.

Vallas explained that often the problem detected is when an object such as a balloon or an animal gets caught within the lines.

“Mylar balloons, those metallic balloons, when those go up in the lines and cross over two lines they will cause a single phase event, where you’ll have a giant shortage. Animals and birds can cause the same thing,” Vallas said.

According to Vallas, the cause of Occidental’s blackout was a single-phase event, which is when interference to the wires compromises one of the feeder lines. In the college’s case, the damaged conduit wire caused the interference. This single-phase event automatically triggered the emergency generators.

As calls began to come into the facilities department concerning the outage, the team had to move quickly to try and locate the source of the problem.

In an effort to locate the source of the original problem, LADWP restored power to the distribution wires. Reyes said that this caused one of the branch wires up on the power pole to completely fail. According to him, the original partial failure, which LADWP sensed heated a ground wire near the switchgear, ignited a spark in some surrounding leaves. As the branch wire failed this second time, it created an arc flash which vaporized the branch wire completely.  The sound of the flash and subsequent fire allowed Occidental Facilities personnel to identify the conduit wire as the source of the outage, according to Reyes.

According to Vallas, the compromised conduit wire fell under the jurisdiction of LADWP which left the facilities and maintenance teams to focus on testing the college’s internal systems.

“A lot of the efforts on our side was to make sure that none of our equipment was damaged during the outage. Basically making sure that all of our electrical distribution systems would be adequate once power was restored,” Vallas said.

Much of the work on the ground also involved the upkeep of the emergency generators. Teams were dispatched to make sure the diesel-powered generators had enough fuel and were functioning properly according to Vallas.

At 11:21 p.m. Saturday, Jim Tranquada, director of communications, sent an email to the Occidental community alerting them that initial reports estimated that power would be restored mid-day Sunday, Sept. 3.

Without power, students could not access buildings, refrigerate or warm up food or charge their phones. The job to mitigate and control these issues largely fell to the resident advisors (RAs). Gabrielle Saliamonas (sophomore), an RA in Braun, was on duty at the time of the outage.

“Initially, I didn’t realize the extent of the power outage and the effect it would have on the building, and the fact that people didn’t have access getting into the building,” Saliamonas said.

“The biggest concern was that if we were to prop doors, there were a lot of safety concerns with people breaking into Braun specifically, and so that made me anxious and I didn’t want that to happen,” Saliamonas said.

In addition to general safety, the general health of the student body was also a major concern for all parties involved. Temperatures had exceeded 100 degrees Saturday and remained high into the evening.

RAs were receiving instructions from Residential Education and Housing Services (REHS) on where to direct students who were looking for a cool place to stay as emergency power was restored to Johnson Hall and the Keck Theater. Saliamonas relayed updates to residents through the Braun Hall Facebook group.

Looking back, Saliamonas said she embraced the opportunity to put her RA training to the test.

“Even though we have gone through very intensive training, everything kind of happens on a very case-by-case basis and you kind of have to harvest everything you’ve been taught and act in the moment,” Saliamonas said.

As students were dealing with the lack of electricity, LADWP crews were assessing the damage to the conduit wire on the power lines. LADWP concluded that the best course of action would be to connect a temporary conduit line to the feeder line on the utility pole, according to Reyes.

A red replacement line was inserted for power to be restored to campus sooner than was previously expected. Power was restored early around 5:45 a.m. Sunday, according to an email from Tranquada. The temporary fix ameliorated what could have been a much longer situation.

“We are very fortunate that this wasn’t a multi-day outage,” Reyes said.

Reyes said plans were being made to bring in large generators to power the college while repair efforts took place. The college was prepared to pay for rental generators if it had been deemed necessary according to Tranquada. LADWP’s decision to install a temporary conduit line ultimately eliminated the need for any larger generators, Reyes said.

A permanent fix to the conduit wire — which would require another campus-wide power shutoff — is likely to be planned for a holiday break, Tranquada said.

Light at the end of the subway tunnel: LA Metro adapts to pandemic and reopening