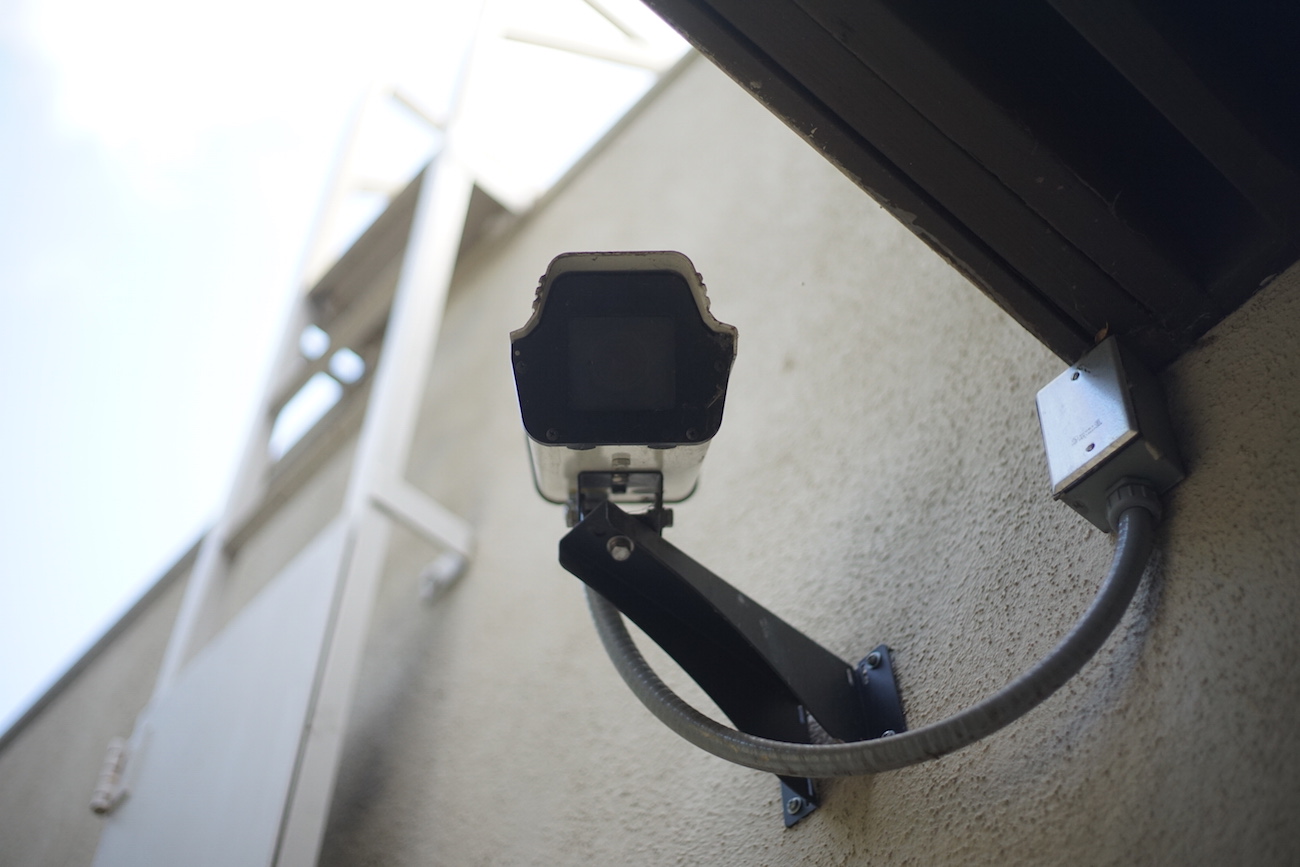 The surveillance of our everyday lives is rising around the world. This heightened normalization of everyday surveillance is present at Occidental as well. With cameras seemingly all over campus, The Weekly was curious to know how and why these cameras are used and who watches them. We set out to investigate how surveillance is regulated at Occidental.

According to Victor Clay, chief of campus safety, the camera system is used every day. The program is operated by Open Eye, a video management software program and the physical cameras are provided by USA alarms. The camera system runs through the internet, rather than through film footage. Video footage recorded from security cameras is automatically deleted after 30 days, unless manually saved, according to Clay. If saved, the video goes into a database that can be used for the investigation of crimes and identification of suspects and witnesses. Clay prefers to have campus security officers be physical presence on campus, rather than monitoring individuals behind the camera. As a general rule, cameras are used as a means of retroactive surveillance.

“A camera is used if a person is not there to deal with it [a given incident],” Clay said. “They are always used post-incident.”

History of surveillance at Occidental

Crimes, cameras and the Clery Act

Investigations and crimes solved are directly reported in a daily crime log, as per the requirements of the Clery Act. The Clery Act is one of the three main federal laws concerned with student on-campus safety and privacy — Family Educational Rights and Privacy Act (FERPA) and Title IX are the others. The very specific requirements of the Clery Act state that all Clery crimes within Clery districts, are reported to the student body and faculty, according to Occidental’s Clery Act Coordinator Veronika Barsegyan, who asked that our interview not be recorded. As is true with any law, the nuanced choice of language in the act is essential. The number of Clery crimes within Clery districts (mostly on-campus and a few off-campus locations) is required in each report. The method of investigation, however, is not required to be reported. Occidental’s Annual Fire Safety and Security Report displays the Clery reporting areas on campus.

When crimes are dealt with through the use of video footage, they are noted only on internal reports. Internal reports are seen by Campus Security and the Clery and Title IX offices. According to Barsegyan, these reports are either confidential or private. Information that is confidential is shared between two parties and kept secret, while private information belonging to a group or person(s) is free from public interference. Barsegyan ensures that the name and number of crimes logged in these reports are made known to the campus via hardcopy and email. However, the specifics about the crime reports that leave her desk are sent out on a strictly need-to-know basis.

Part of this information is the method of investigation and, according to Barsegyan, the Clery Act does not require a college to report the technology and equipment used in crime investigation — meaning that the use of video surveillance is not information required in reports to the campus. The use of cameras is only mentioned once in the Clery section of the Annual Fire Safety and Security report, for which Barsegyan is responsible.

“The Department also uses a variety of electronic devices including security cameras,” the report states.

According to Barsegyan, none of the crime reports that leave Barsegyan’s office specify how and when video surveillance is used. Specifications for dealing with video footage and security cameras can be found in the 265-page Handbook for Campus Safety and Security Reporting issued by the U.S. Department of Education in 2016.

In 2017, surveillance in public spaces is increasingly more commonplace. At its core, the 21st century is an age of information – information that can be shared or taken. As a result of the case Katz v. the United States, individuals have a right to a reasonable expectation of privacy in their homes. However, as the prevalence of surveillance grows, there is a question of how best to handle the information collected. Professor Peter Dreier of the Urban and Environmental Policy Department described this fine line.

“I assume that the college justifies the existence of these cameras on the grounds of public safety and protection. I don’t see a problem with that. But if they are ever used to invade privacy, infringe on free speech or spy on students or employees engaged in legal activity, that crosses the line,” Dreier said.

Evan Bromberg (senior) reflected on the rise in surveillance on and off campus.

“I’m not doing anything illegal so I don’t really care about the cameras,” Bromberg said. “Also the fact that the NSA watches and listens to everything we do; we live in a world and society where the expectation is we are always being watched.”

As previously mentioned, Occidental College is required by the Clery Act to create, maintain and make available to the public the daily crime log. The log includes the date the crime was reported and occurred, the nature of the crime and the location. Barsegyan said that the classification of crimes and what to report is decided by a Clery Team – Barsegyan is on this committee and other members include Clay, Title IX coordinator Ruth Jones, Assistant Director for Student Conduct Tom Wesley, a survivor advocate Marianne Frapwell and the Director of Human Resources Danita Maxwell. Within the Annual Fire and Safety Report, there is no requirement to distinguish between crimes solved through video footage and those solved without cameras.

Whenever there is a threat that a crime is ongoing or may be repeated, Campus Security will issue a timely warning. In these timely warnings, video footage or camera images may be used for matters of identification, but the Clery Act does not specify what a campus and security department are permitted to do with the footage. FERPA provides some clarification in regards to the administrative use of video footage, but not much.

Part of the confusion over what specifically can be done with video footage stems from a lack of clarity in the laws referring to FERPA and themselves.

“Most of these laws were written before video surveillance, so it brings forth an issue that wasn’t there before,” Jones said.

There are guidelines for dealing with security camera footage, but no specifics on what exactly to do with video recordings. According to Jones, each department on campus has its own criteria of how to deal with surveillance.

Muñoz has been working for Occidental’s Hospitality Services — which includes the bookstore, the Tiger Cooler, the Marketplace and the Green Bean — for thirty-two years. In her time at Occidental, she has seen the growth of video surveillance on campus. According to Muñoz, Hospitality Services monitors their own camera system, which she estimates includes 70 cameras, of the 260 cameras on campus in total.

With 23 video cameras in the Marketplace alone and cameras at every register on campus, Muñoz said purpose of cameras in dining facilities is to deter theft and misconduct. However, Muñoz noted that there is a balance between being watched and creating a friendly environment.

When accused of theft or misconduct, a student will not be immediately notified. The accusation is compared to video footage and if the footage verifies the crime, the video is sent to the Conduct Office. If the suspicion is false, there is no notification made to a student.

“We go through the footage and ask if what they think happened, happened. If it did, we take action from there,” Muñoz said.

If students are caught stealing, they are reported to the Office of Student Conduct, according to Muñoz. The most common scenario Muñoz finds on video footage is people walking in and out of dining facilities without paying, which, according to Muñoz, happens in spurts. The most recent incident of student theft she remembers was Fall 2016 when multiple students left without paying. For incidences like these, Muñoz says that disciplinary action is and has been taken against students using video footage.

“Philosophically, we want dining to be friendly. We like to operate on an honor system,” Muñoz said. “But a little deterrence goes a long way.”

The future of surveillance at Occidental

For Campus Security, cameras at Occidental College are only used after crimes are committed, not for pre-emptive crime prevention, according to Clay.

Logistically, Clay said there are not enough time and resources to have an officer constantly monitoring the cameras. Video surveillance is not only used for criminal identification, but for tracking down potential witnesses. In February, Campus Security responded to the incident of a man suspected of trespassing, theft and lewd acts in residence halls, who they also believe is the same individual who pulled up pornographic images on school computers. According to Clay, camera footage was used to identify a witness, who was observed in the same camera frame as the suspect. Campus Security tracked down the witness, who is an employee for Occidental, and the individual was able to provide Campus Security with information and provide the name of another witness, whom Campus Security contacted.

Looking toward the future, Clay said Campus Safety may hire a full-time dispatcher. Campus Safety hopes to continue the rise of video cameras around campus. As video surveillance becomes an increasingly important tool for Campus Safety, the Occidental community continues to adjust to the growing presence of cameras on campus; from classrooms to dining halls to parking spaces.