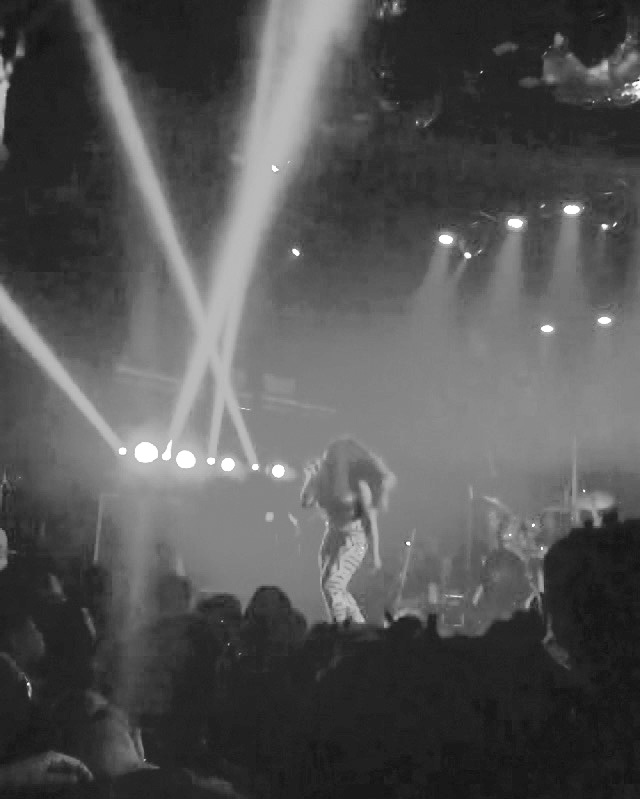 Twenty-nine-year-old British musician Neo Jessica Joshua, known by her stage name “Nao,” is making her mark as a leader of the new age of funk. Her performance at The Mayan in Downtown LA Wednesday, April 19. The show was a last-minute addition to her U.S. tour, squeezing the concert between her sets at Coachella — Nao still managed to draw in a full house, providing Occidental students with the opportunity to experience the sound of an up and coming artist. Exuding an infectious energy from the stage, Nao made it hard to believe that she has only been performing on her own since last year.

At her performance, Nao moved easily from moody ballads to high-energy twisting and jumping to her dance hits. Nao seemed just as excited as the audience to be there.

Though Nao has been singing since she was 14, she is still getting used to her growing success. In 2014, Joshua parted ways with the female-led a capella group “The Boxettes” and soon after, she was producing singles on her own.

“It was quite a beautiful moment actually, stepping from behind the scenes to the front,” she told NPR. “When the moment came for me to do my first performance as myself, up front, it was just a completely different energy which I hadn’t experienced before, and it was really special to have people in the audience know your songs. I was kind of like, ‘What was I doing all of those years before?’ ”

Nao’s EP “So Good” earned her mainstream success, making its way to No. 4 on iTunes electronic charts. With a rare sound and a killer stage personality to boot, Nao’s LA performance is certainly not the last we will be hearing from her.

Nao presented her music with a rare authenticity. She would periodically stop between lyrics, smiling as the audience sang along. The show was decidedly bare-bones with background lights shifting from purple to red, allowing her vocal performance to flourish as she jumped up and down without shoes on stage. Even with her ability to charm an audience with her voice and dance moves, she seemed humble, constantly thanking the audience for showing up. But don’t let her humility fool you — Nao’s music is sharp, smart and tenacious including lyrics like “my tongue is number still i take the bit, of your requited touch, i do like the taste of, our troubled love…”

Nao’s unique sound is disrupting the young adult market full of the same style of unoriginal, repetitive music on repeat. She shakes up the Coachella goers with a genre uncommon at music festivals — neo soul. This blend of R&B, soul and funk is a style she describes as “wonky funk.”

Her lyrics speak to the clichés of love and loss that resinate with most 20-somethings, with an originality and confidence. Her songs center on falling in and out of love, money, break-ups. Her music maintains a pulse that is still completely appropriate for a festival and will satisfy even those just looking for a good beat.

Electronic dance beats amplify every song. Influenced by funk and soul of the 1970s and 80s, Nao shows another side of EDM. Her music pays homage to funk classics like Stevie Wonder, Brandy and Prince, but her fusion of electronic beats and collaborations with EDM rising stars — Mura Masa, Kaytranada, Disclosure, Jungle and SBTRKT — show that she has something new to offer.

With the mainstream success of neo-soul and funk-infused albums, like Rihanna’s ANTI, the revival in popularity of this genre should come as no surprise. Nao is riding a new wave of  music that takes a sharp detour from the common candy-coated pop.

While Nao’s list of songs is short, her music shows her adaptability. Her most recognizable hit “Firefly”  was mixed with Mura Masa, an EDM group also from the U.K. The song begins with her classic airy style and builds up to a chorus pumped full of energy. Her more energetic hits are complimented by her slower, more jazzy tunes. Songs like “Fool to Love You” and “Blue Wine” take a softer tempo that one can sway to and Nao’s physical performance of them possesses as much range as the music on her album.

The Los Angeles crowd cheered her on to an encore of “Bad Blood,” to which many in the audience sang along. Nao radiated energy and movement the whole night.