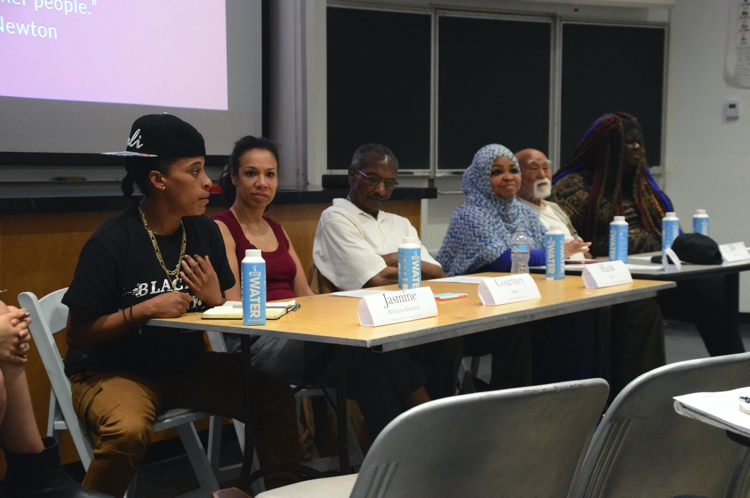 “We love everybody who loves us. But we don’t love anybody who doesn’t love us,” Malcolm X said.

A committee of nine students organized the event and developed a series of questions for the panelists. Committee member Camille Cribbs (senior) acted as head of logistics. Kayla Williams (first year) and Kelsey Martin* (sophomore) moderated. Many of the students on the committee are enrolled in Professor Amy Tahani-Bidmeshki’s Transnational Liberation course.

Tahani-Bidmeshki emphasized that she wanted this event to be different from the Showing Up for Black Lives Part I. Tahani-Bidmeshki said that many students expressed that they were strongly impacted by the feelings of unconditional acceptance and love throughout the audience during Part I. Tahani-Bidmeshki believes that love should not be used simply to feel good — love should encourage action. She wanted to complicate the idea of love to move away from the notion that love is a liberal embrace and introduced the notion that love can be conditional — given only to individuals willing to show up for black liberation. The organizers intended for Part II to demonstrate that love is earned only when action is taken.

“Love is conditional and we want to emphasize that. It is very much connected with how you are showing up for racial justice,” Tahani-Bidmeshki said.

The panelists outlined how white people can demonstrate love for minorities and also debated the issue of loving those who oppose you. Part II explored the concept love in an attempt to fuel action from members of the community of all races. Toward the end of the event, one white member of the audience stood up and expressed their promise to defend black lives and educate their peers. After which Aziza Hill, professor and co-founder of the Muslim Anti-Racism Collaborative (MuslimARC), emphasized the importance of more white people verbally supporting black people.

At one point, the audience asked Aziza Hill whether activism could be sustained if love is only given to those who give love back. In response, Aziza Hill said that in order to know who to love, it is first necessary to identify who the players are in the black liberation movement.

“In this work, there are many adversaries and systems that are made up of their actions, so we must answer who is benefiting from the violence in order to resist,” Aziza Hill said.

Aziza Hill’s comment led to a debate about the dynamic of love between the oppressed and oppressors. Panel members debated their interpretations of conditional love. Jones insisted that love can not be given to those who hate, while Richards-Abdullah said that the survival of the black liberation movement depends on unconditional love. Richards-Abdullah, who claimed the Biblical phrase “love the sinner hate the sin” as her guidance, believes that individuals involved in the black liberation movement must educate people who oppose the movement. Part of this, Richards-Abdullah said, requires forgiving racist and hateful people. Tahani-Bidmeshki hopes similar debate will move beyond classrooms and auditoriums and into our communities. For Williams, the main purpose of the event was to encourage students to take action.

“There needs to be a transitioning of the conversation so that people can see ways that they can help in resistance that is not just going to protest, but other ways of supporting the cause. Ideally, this event would be a great revelation for people to see where they can fit in the larger movement,” Williams said.

Cribbs said that it is important to continue the discussion of Showing Up for Black Lives. Williams agreed that it is essential that students remember that being in college does not remove them from the issues and the need to fight.

The panelists echoed Williams’ and Cribbs’ call to action. Coleman said love can be displayed through concrete actions individuals can take — including educating oneself and being aware of one’s privilege. The panelists spoke to the rise of pseudo-love eschewed by many so-called allies — people who label themselves as anti-racist but fail to take action against racism. Professor Courtney Baker said she sees real love when people take physical action by protesting. Panelists urged the audience to understand the necessity of expressing genuine love for black individuals, to live out the title of the event: Showing Up for Black Lives.

Richards-Abdullah believes showing up requires reaching into communities and providing services for those who are oppressed. Williams, who works with Richards-Abdullah tutoring students, is working on an initiative to encourage Occidental students to engage with young kids as mentors in Eagle Rock and Pasadena neighborhoods.

Tahani-Bidmeshki hopes to continue the Showing Up for Black Lives initiative. In the future, she sees the panels continuing to address elements about what it means to be involved in the black liberation movement and continue to unpack the complexities of revolutionary movements.

Professor Tahani-Bidmeshki hosts a public Community Teach-In and Workshop every other Wednesday at the Villa Park Community Center in Pasadena. It is open to all students.

*Kelsey Martin is a writer for The Occidental Weekly