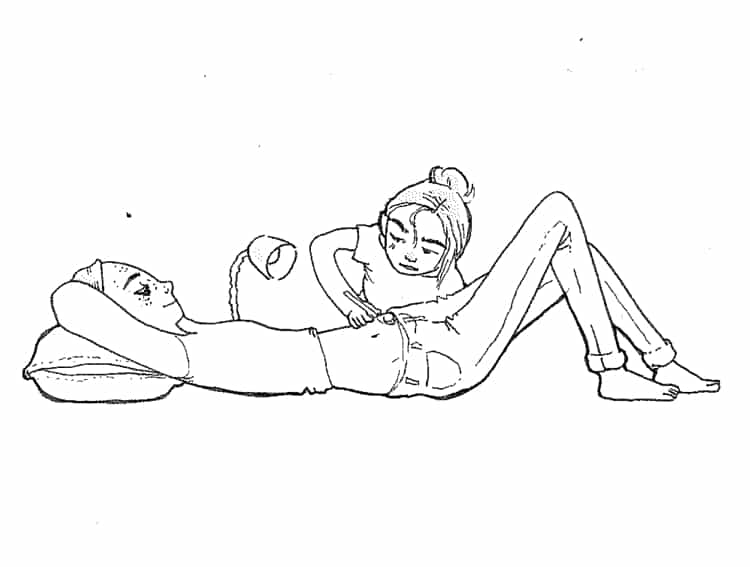 Occidental student, Caroline Shehan’s (sophomore) wrist is a small crescent moon, intended to symbolize femininity. It serves as a nod to her favorite poem, “Too the Moon” by Percy Bysshe Shelley. Shehan’s body art demonstrates the growing popularity of stick-and-poke tattoos, which are created by repeatedly poking sanitized skin with an inked needle to form a design. As a homemade, budget-friendly form of body modification, stick-and-poke tattoos are increasingly appearing on the bodies of Occidental students.

The tattoo community often refers to stick-and-poke tattoos as “prison tats” because of their often dangerous, messy and DIY nature. While DIY-tattoos do have roots in jails, they have since been adopted by “creative types” as a fun and expressive bonding activity, according to GQ. Fortunately, stick-and-poke practitioners can minimize the health risks associated with this type of tattoo by avoiding unsanitary methods such as the use of safety pins or sewing needles and opting instead for sterilized needles and nontoxic ink that can be purchased online. A stable hand is also important.

“The human skin as a canvas is truly unique; for me, [stick-and-pokes] are almost painless, [and] the process of these particular tattoos [is] very intimate and sentimental,” Shehan said.

Sasha Eberhardt (sophomore) also taught herself how to give stick-and-poke tattoos during her junior year of high school.

“I like drawing with pen in little dots, so it’s pretty much the same thing,” Eberhardt said.

Shehan similarly enjoys the creative process of giving stick-and-poke tattoos, particularly the meditative process of laying out a design and carefully poking the tattoo.

“People used to come to my roommate and I and ask for tattoos and it was fun,” Shehan said. “Together we would envision designs and ideal placements for the ink and also came to realize this intimacy of poking as well as the tiny community surrounding the art.”

While Shehan and Eberhardt will consider giving stick-and-poke tattoos to other body art enthusiast, they prefer to keep the practice among friends at Occidental; neither advertise their services.

The ease and low cost of stick-and-pokes are offset by the fact that they are much slower, and potentially less sanitary than traditional tattoos. Additionally, the process can be more painful than one done in a tattoo parlor.

Another downside to stick-and-pokes is that they fade relatively quickly and need to be touched up often. Luckily, retouching stick-and-poke tattoos is relatively simple, compared to traditional tattoo touch-ups, as they can be done quickly and at a low cost between friends.

Similar to a traditional tattoo, stick-and-pokes usually carry significant meaning to those who choose to go under the needle. Soon after she moved to LA, Eberhardt gave herself a stick-and-poke tattoo in the design of a palm tree so that she could always remember her time here.

Rae Finio (sophomore) has a number of stick-and-pokes — some with meaning and some without. While she enjoys the aesthetic of the tattoos her finger, the tattoo on her right wrist that reads “17 Forever,” holds more personal meaning and serves as a commemoration of that year of her life.

Despite the painful, incremental process and needed attention to sanitation, the low cost and exciting nature of stick-and-poke tattoos will likely preserve their presence on the skin of Occidental students.

Love tattoos? Email us at Weekly.oxy.edu or Tweet us @OxyWeekly