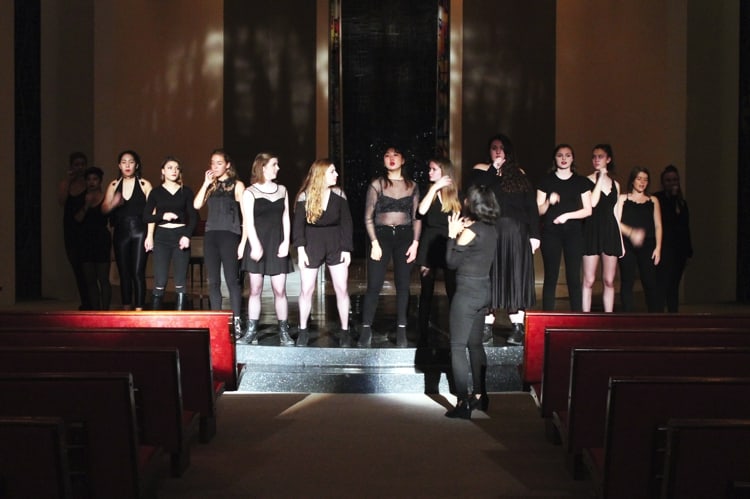 An all-female a cappella group travels to a national competition, ready to show the country their vocal chops. This is either the plot of the film “Pitch Perfect,” or the reality of the Accidentals, Occidental’s only all-female a cappella group. The group of 15 vocalists traveled to University of California, San Diego Feb. 4 as the first group from Occidental to compete in the Southwest Region quarterfinals of International Championship of Collegiate A Cappella (ICCA). The Accidental’s won third place in the quarterfinals.

The Accidental’s set list for the ICCAs opened with “Hate on Me” by Jill Scott, then moved into a guilty pleasures medley including hits such as Miley Cyrus’ “Wrecking Ball” and concluded with Sia’s “Elastic Heart.”


The ICCA is the most well-recognized collegiate a cappella competition with 450 groups competing across nine regions in the United States and Europe. The Accidentals competed against groups from University of Southern California, Chapman University and University of San Diego, California. In order to participate, a cappella groups are invited to perform after submitting a recording that includes a choreographed performance of a few songs. They are judged on vocal performance, presentation, choreography and arrangements. Last October, the Accidentals’ Co-Directors Sophie Gabel-Scheinbaum and Anastasia Ryseff (seniors) submitted an audition tape and were ecstatic to find out they were accepted. This year marked the Occidental’s first attempt to enter the competition.

“No one’s ever tried. Sophie Gabel-Scheinbaum and I are the directors this year and last summer we did all of our planning for this year and both thought it would be a really great opportunity for us, so we decided to audition,” Ryseff said.

According to Gabel-Scheinbaum, the Accidentals were founded in 2003 as one of Occidental’s three student-run a cappella groups. Ryseff explained that their name comes from a pun on an accidental, a music term for a note of pitch such as a sharp or a flat, and the college’s name. The group of 15 vocalists usually rehearses for two hours twice a week,  but in preparation for the ICCAs, they practiced every night during the week and a half leading up to the competition. The structure of the Accidentals is noticeably different from that of other schools in the ICCAs. Among larger schools, a cappella would take up almost all of a students’ free time. The Accidentals do not rehearse as often and are not as familiar with choreography compared to their competition Jane Crosby-Schmidt (first year) was impressed with how well the group was able to adapt to the rigorous rehearsal schedule.

“Rehearsals usually consist of silly warm-ups, then drilling one or two songs over and over — either all together or split up into voice parts,” Crosby-Schmidt said. “For ICCA, we had to add choreography to our set, which is not something we usually do. It’s been a bit of a challenge, but I think we surprised ourselves with how well we were able to pick up the moves.”

As co-directors, Gabel-Scheinbaum and Ryseff are in charge of organizing and running rehearsals, coordinating performances and creating arrangements where they take a song and translate it to the vocal-only a cappella style. Gabel-Scheinbaum and Ryseff look for a blend of old and new songs that are popular among Accidental members. Kylie Teller (senior), who has been in the group for the past four years, describes the group dynamic as very welcoming and collaborative.

“Sophie and Ana take a lot of recommendations and so we have a little more say. And it’s easier to express discontent and have that be a pro-active thing. It feels really nice to be in that productive space,” Teller said.

The co-directors have both been in the group since their freshman year and noticed that the group dynamic changes drastically each year depending on the director. Isabella Capeci (sophomore) noted that the Accidentals have performed Sia’s “Elastic Heart” for the past three years, but have fine tuned it enough to add to their ICCA setlist. She attributes the improvement to all the group’s sense of camaraderie and effort to bond outside of rehearsals.

The group is thrilled to represent Occidental and hopes to set the precedent for groups to come. Gabel-Scheinbaum says the group has already surpassed all her expectations and all members are thrilled to perform.

Love a cappella? Email us at Weekly.oxy.edu or Tweet us @OxyWeekly