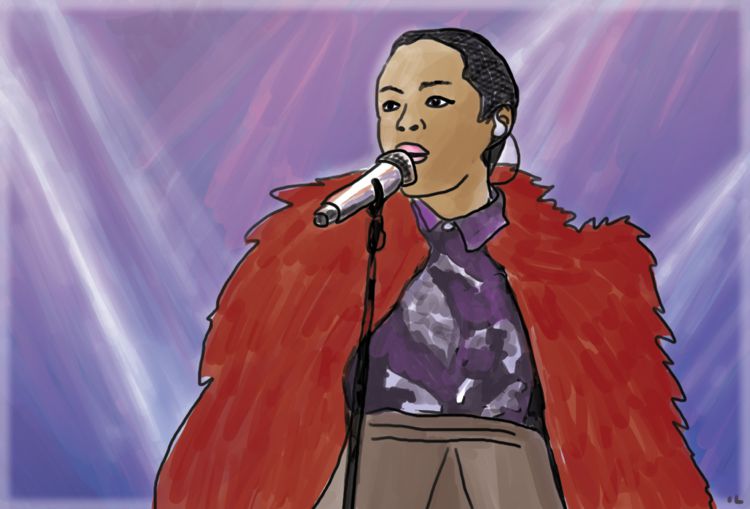 It is Thursday night and Los Angeles’s Greek Theatre is abuzz. Concertgoers munch on fries and nurse glasses of wine in their outdoor seats, talking to friends with anticipation. As the night wears on and two opening acts come and go, plastic plates are scraped clean and wine glasses emptied. People begin to shift in their seats, recounting rumors of this particular headliner’s erratic history with the music industry. But then it happens. Lights go up, the crowd erupts and by the time Lauryn Hill walks onstage, her audience is ready to receive her.

Hill performed at Griffith Park’s Greek Theatre Oct. 20 as part of her “MLH Caravan: A Diaspora Calling!” tour. Though the bulk of Hill’s original work came out before the first iPod, it didn’t take long for the hip-hop legend, dressed in a black gown and bedazzled red jacket, to remind the crowd that she is a musician with staying power. Onstage, Hill constantly multi-tasked: singing, rapping, playing guitar and, above all, staying attuned to every moving element. Throughout her performance, Hill simultaneously conducted her band with hand signals, shook her head with displeasure if she was unhappy with her sound and occasionally called out directions to stagehands over the microphone. Hill is every inch an artist, each performance her artwork.

The tour marks a rare foray into the public eye for the notoriously private Hill. She first rose to prominence as a singer and rapper for ’90s hip-hop trio the Fugees. After producing hits like “Killing Me Softly With His Song” and “Ready or Not” with the group, Hill struck out on her own with her hugely successful 1998 full-length album “The Miseducation of Lauryn Hill.”

“Miseducation” sold 8 million copies and garnered Hill five Grammy awards, a record for a female artist at the time. Included in her sweep was a Grammy for Album of the Year, making “Miseducation” the first hip-hop record ever to receive the award. With contributions from figures like John Legend and D’Angelo, combined with Hill’s own conscientious and self-reflective lyrics, the record marked a seminal moment for black female hip-hop artists and rappers.

“[It’s] one of the most incredible albums ever made,” Mary J. Blige said in an interview with Rolling Stone, pointing out that “Miseducation” influenced an entire generation of soul and hip-hop artists.

Yet almost as quickly as she appeared, she was gone. Mysteriously, at the height of her success, Hill withdrew from the music industry. Although she surfaced for occasional projects including a 2002 live album called “MTV Unplugged No. 2.0” and a tribute to Nina Simone in 2015, her original music production never exceeded the work on “Miseducation.” Although there is speculation that Hill is working on new material, nothing has been confirmed. Rumors explaining Hill’s disappearance abound, ranging from disillusionment with the music industry to motherhood to her recent incarceration for tax evasion.

“I had created this public persona, this public illusion, and it held me hostage,” Hill can be heard saying through tears on her “MTV Unplugged 2.0” record. “I couldn’t be a real person, because you’re too afraid of what your public will say. At that point, I had to do some dying.”

Though Hill’s public presence did diminish, her influence certainly did not. One need not look further than Nicki Minaj’s introduction to Hill last week at a benefit they both attended to see the excitement she elicits to this day.

Hill’s contemporary significance is undeniable. When Hill rapped for her Greek Theatre audience, her mouth seemed to move faster than the speed of sound to mold rhymes she wrote years ago, but that still remain relevant to this day. Her poignant performance of “Rebel,” an updated version of her 2002 track, “I Find It Hard to Say (Rebel),” was originally written to commemorate the death of Amadou Diallo, an unarmed west African immigrant murdered by police in 1999. Today, the lyrics’ message remains horrifyingly familiar.

Though her MLH Caravan set ranged from original work to covers of musical inspirations like Sade, her hits from the Fugees days stood out as nostalgic crowd-pleasers. As soon as she struck the first few chords of “Ready or Not,” midway through the show, her audience instantly launched to its feet, never to sit back down. Hill teased the crowd with some call-and-response, repeatedly crying out: “Ready!” And the answer, overwhelmingly, was “Yes!”

Now, it seems, the only thing left to find out is what we have to be ready for.