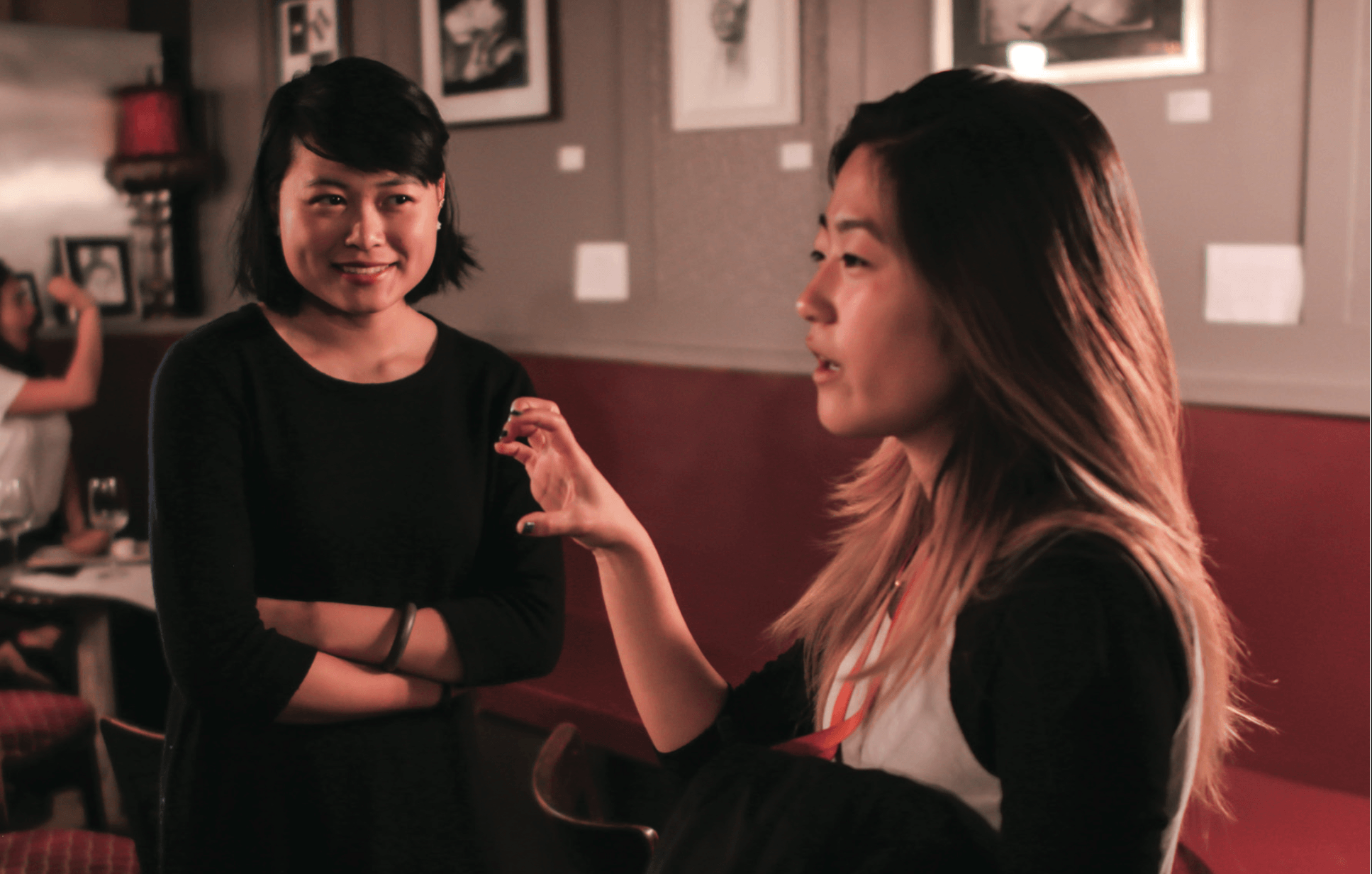 A dual-exhibit of graphic art by Occidental seniors Irene Lam and Elizabeth “Lizz” Wu is showing Los Angeles what the “arts” in liberal arts college really means. “Phases,” the artists’ first exhibit off campus, is a collection of artworks now on display at Colorado Wine Co. The eye-catching works from a number of different mediums span over three years of Wu and Lam’s creative teamwork. The pieces manage to capture their individual styles while maintaining an air of playfulness and whimsy.

Lam and Wu’s work is intimate. Standing before a piece feels like sitting down at their dinner table and listening to them as they tell their stories.

The artists’ collaboration began in 2014, during their sophomore year at Occidental. The duo initially called themselves “Sun Dog” but after a lawyer from Solana Beach emailed them with a cease and desist, Lam and Wu were forced to change their name and settled on “Space Dog.” After their first Handmade Oxy, a one-day sale showcasing the artistic creations made by Occidental community members, the two were featured in the Weekly.

Lam works mainly in graphic design and various printmaking mediums including, her favorite, risograph, a system of digital printing. Her subjects range from prints of bacon to a diorama made with little dinosaur figures titled, “Tiny Dinosaurs.” Lam describes her work as evoking the kitsch and a sense of nostalgia.

“I definitely focus a lot on childhood and going back to a more innocent, younger state of mind. So a lot of my pieces are about video games and Gameboys and older technology” Lam said.

Highlighted near the entrance of the exhibit is an almost-wordless comic Lam made titled “Underwater” that follows a young girl’s adventures on the beach in calming blues and purples. In less words than it took to write this article, Lam moves the reader to tears. It showcases her visual storytelling skills and brings together the best of her double English-studio art major.

“In high school I knew that I wanted to do English, and then I took my first art class, silk screen printing as a freshman fall semester [of college] and I thought ‘Oh, I gotta do this,’” Lam said.

Besides creating art, Lam works as an illustrator for the Occidental Weekly and layout editor for The Fang, Occidental’s satire magazine. Lam is also an arts editor for FEAST Literary and Arts magazine and one of the editors of Oxy Graphic, Occidental’s comic zine.

Wu grew up in artistic family and has been creating pieces since high school. Her work displays a variety of subject matter ranging from quirky etchings of dogs to intimate lithographs of people’s bodies. She describes her work as an exploration of the humor and privacy of everyday life. Like Lam, she is also double majoring in studio art and sociology and it is not uncommon for Wu’s passion for art and sociology to blend together.

“Things that we don’t really question every day but see every day just become questions and it turns into a study and I think that’s really remarkable,” Wu said.

Wu aims to remove the stigma behind traditionally “private spaces” often found in interpersonal relationships, by conveying a sense of trust between the artist and viewer. Many of her works including her own experiences with love. Her most personal piece titled “Out of Reason Into Love” is a copper etching of a person whose head is a light bulb and is inspired by a toxic relationship she once had.

“When you do things for love a lot of times that is outside of logic or outside reason,” Wu said. “You are putting yourself in a place where, you know, you’re vulnerable and you’re going to crack but even in that moment, however, you’re very bright. You’re a light bulb and you’re shining.”

After college, Wu plans to work with Urban Teachers, a program that works with John Hopkins to educate teachers. Lam plans to find work in design and publishing.

Lam and Wu currently live off campus with their landlady, Lisa Roman. Roman has arts background as a filmmaker, set decorator and art director has hosted multiple art shows promoting other artist’s work.

“I knew they were art majors, then I saw their art in my garage and thought, ‘Wow, we gotta do a show for you.’” Roman said.

Roman then reached out to the owner of the Colorado Wine Co. and Occidental alumni, Brett White ’12, and the two were able to co-host the exhibit.

“[Lam and Wu] are very productive young people. I was really impressed by them,” Roman said.

The exhibit runs until the end of September and is located at 2305 Colorado Boulevard.