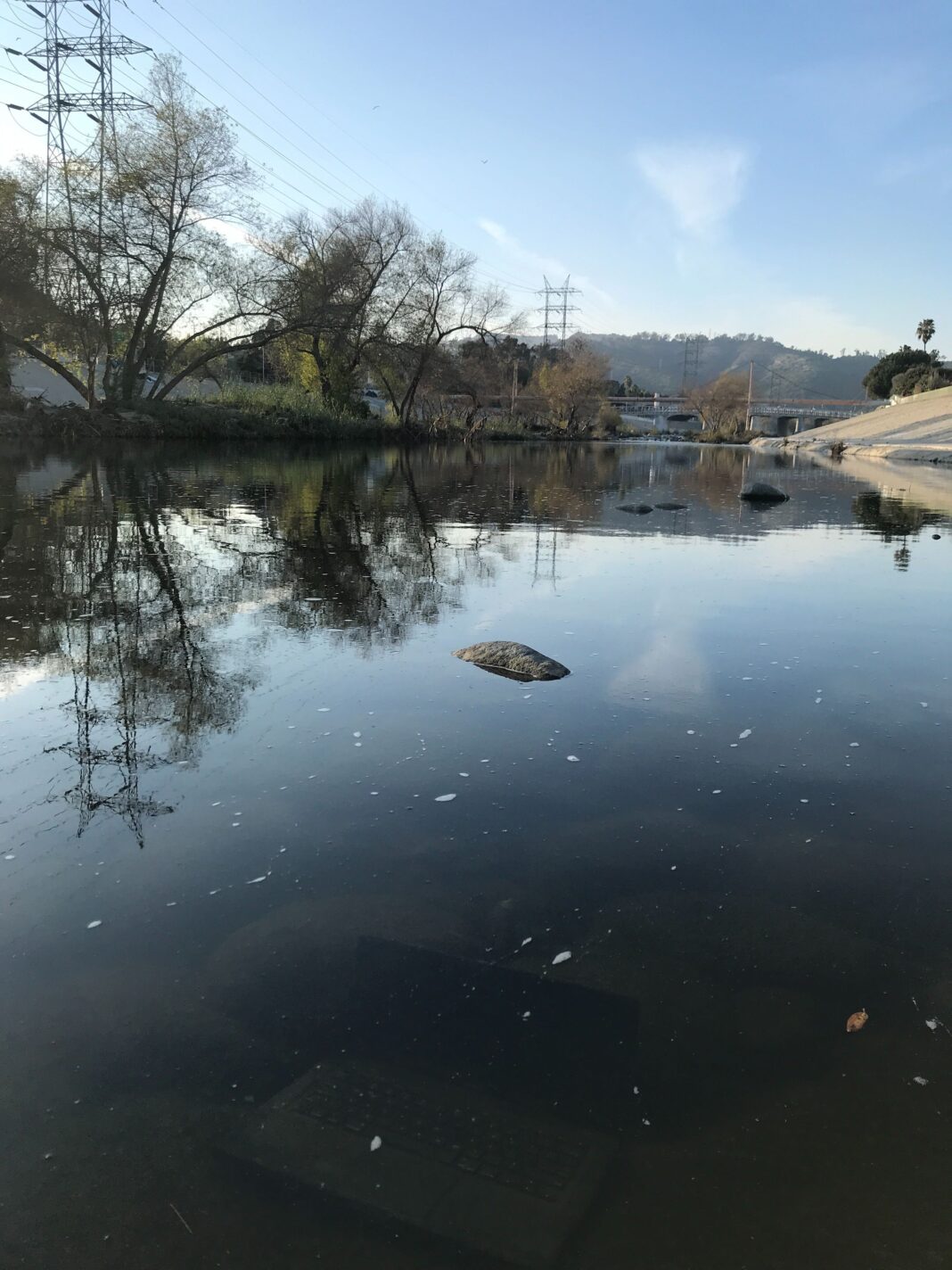 LA County released a public draft of its 2020 LA River Master Plan Jan. 13, the first plan of its kind since 1996. The 494-page document details existing conditions and needs across the entire 50-mile LA River, including the portion of the river that runs through NELA.

The plan outlines goals and recommended actions for the river and nearby areas, including reducing flood risk, increasing public access to riverside parks and trails, supporting natural ecosystems, using the river to foster opportunities for arts, culture and education and making local water supply more reliable and clean. It also aims to address negative impacts that this development may have on nearby housing affordability and unhoused residents.

The stretch of the LA River that runs through NELA and snakes through Frogtown before joining the Arroyo Seco River is not the central focus of the plan. However, according to Michael Atkins, communications director for Friends of the LA River (FOLAR), a nonprofit seeking to implement nature-based solutions to improve the river, NELA’s stretch of river possesses unique characteristics. 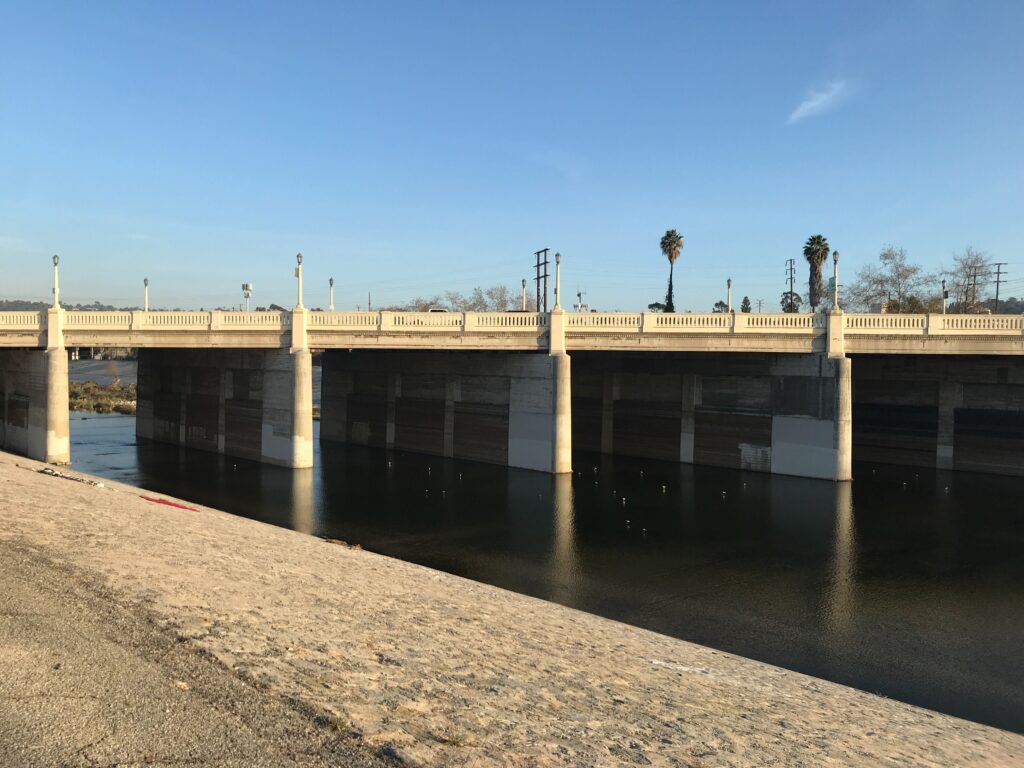 After the devastating LA flood of 1938, which killed more than a hundred people, the U.S. Army Corps of Engineers and other LA agencies moved to channelize the LA River. However, the highlands in NELA posed an insurmountable challenge.

“The water table is so high at that point of our geology that when they were pouring concrete in the 30s, and 40s, it would not dry and stick in the center of the river,” Atkins said.

In an attempt to secure the sediment in the middle of the river, developers introduced arundo donax — an invasive species of bamboo shoots, according to Atkins.

The NELA portion of the river is also the site of one of the largest ongoing riverside development projects, one of 56 projects along the river that are currently being planned or worked on. The G2 Taylor Yards project will be located on over 40 acres of land on the eastern bank of the river in Glassell Park.

The empty land is the site of a former train yard purchased by the City of LA Bureau of Engineering in 2017, next to the existing 40-acre Rio de Los Angeles State Park and Bowtie Parcel, an 18-acre outdoor art and event space.  The project aims to create a park, with native plants and wildlife, that will be accessible to the public. Preliminary designs have been proposed and the final project is expected to be completed in 2028.

There is also a planned private apartment complex next to the Taylor Yards lot called Casitas Lofts, which would add 384 market-rate apartment units and 35 affordable units. Many organizations, including FOLAR and the National Resource Defense Council, have expressed opposition to the project, saying that its location puts the project at risk for flooding, that it takes up valuable space that could be used for public access to the river and that it goes against housing affordability needs in the area.

“This private development at the north end of what’s going to be 98 acres of park space, you really got to wonder who is benefiting from this — like, everything on the ground floor is going to be tied to and associated with this public park, like the park is giving immense value to that land,” Atkins said.

Another section of the LA River Master Plan seeks to address the risk of development along the river causing rises in housing prices, displacement of longtime residents and displacement of unhoused people near the river. 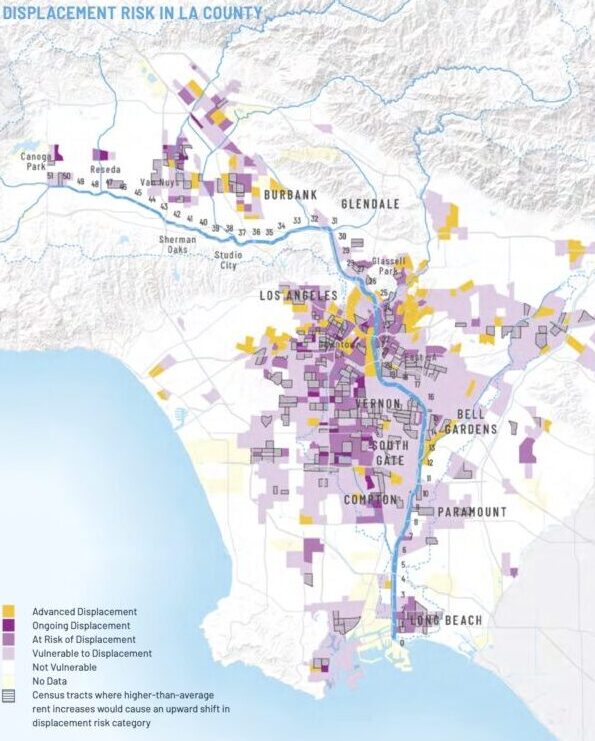 Maps in the LA River Master Plan show that, in the event of further development along the river, areas of NELA are vulnerable to displacement. Maps indicate the majority of the Elysian Valley area is at risk of being priced out if changes caused prices to rise. Areas below Interstate 110 and above Interstate 10 are shown as at risk of ongoing displacement — this includes Lincoln Heights and Glendale Junction. Other areas, including Silver Lake and Eagle Rock, would be hit hardest and show “advanced displacement,” meaning there has been rapid changes to the communities’ demographics and home values.