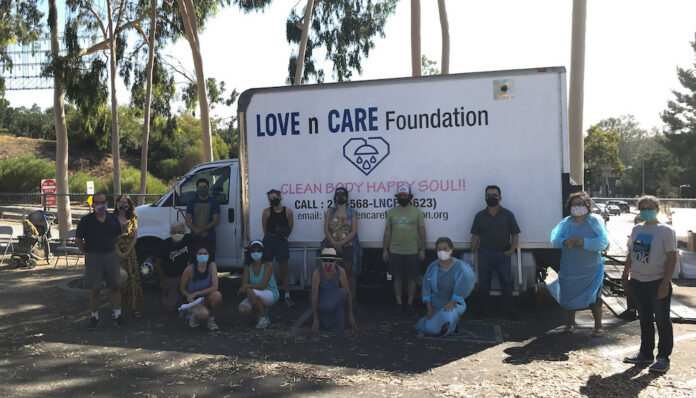 Multiple volunteer community organizations collaborated to provide showers to unhoused residents in the Eagle Rock area Sept. 19. In the afternoon heat, Love N Care Foundation, a family nonprofit, set up its homemade mobile shower truck in a parking lot on Figueroa Street, just north of the encampment underneath the 134 Freeway and across from the Eagle Rock Recreation Center.

Jack Bentele, co-chair of the Eagle Rock chapter of SELAH, said the chapter also does outreach trips every Sunday morning to bring food to unhoused people in the Eagle Rock area. The group is always looking for more volunteers, and people can apply or donate by emailing jackbentele@gmail.com or jane.demian1@gmail.com.

At the shower event, aside from tables and tents from Council District 14, all of the supplies were donated by volunteers, Bentele said.

The event would not have been possible without the self-engineered shower truck, provided by Love N Care Foundation. Joanne Cho started the foundation with her sister and a former business partner about a year and a half ago.

“We were retirement age, and we decided to do something meaningful,” Cho said. “We bought this truck and then we built everything from scratch.”

The truck is equipped with large tanks that can hold 250 gallons of water, enough to provide showers for 50 people without needing to be hooked up to a water source, Cho said. The gray water from the showers is collected and only eco-friendly shampoos are used so that the water can be dumped anywhere without polluting, according to Cho.

On the side of the truck is the foundation’s motto: Clean body, happy soul.

Volunteer Anne Shapiro said that of the 25 people who showered, 20 were new. 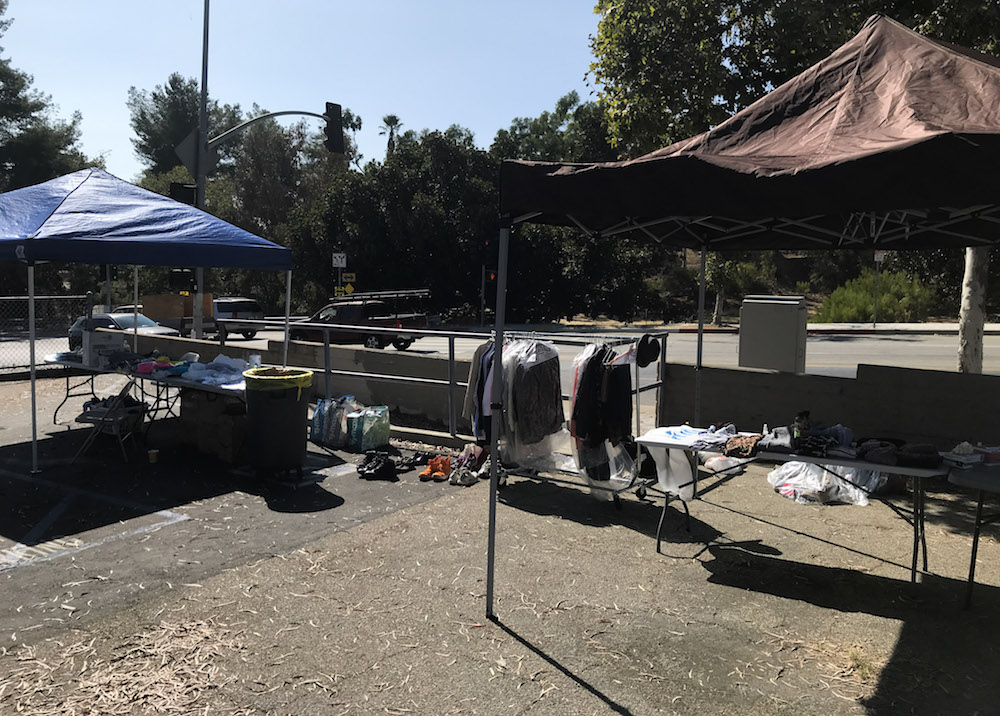 Jane Demian, the Homelessness liaison for the ERNC, other co-chair of Eagle Rock’s SELAH chapter and a longtime local activist, said her group reaches out every week to the unhoused community in the area and knows all of them by name, which develops a trust and familiarity that she said the Los Angeles Homeless Services Authority and its contractors, Exodus may be unable to form.

“Since they know us, they’re willing to confide in us a little bit more,” Demian said. “There is a real distrust and suspicion about city and county agencies. And also the police.”

Demian said she understands that city and county agencies are overwhelmed by the city’s unhoused crisis — that is why she and other volunteers are filling in the gaps. Still, she said the city fails to make quick changes that would alleviate problems. According to Demian, she and other advocates have been asking the city since the beginning of the pandemic for a hand-washing station at the Figueroa encampment.

Demian also said the city rarely picks up trash that residents of the encampment pile neatly in a corner of the lot, which leads to complaints from locals blaming their unhoused neighbors.

Cho said it is necessary for individuals to support their community.

“We have an epidemic in homeless population right now,” Cho said. “Government cannot do everything. The least we can do is this and help them feel better.”

This article was updated Sept. 25 at 12:31 pm to update Jane Demain’s full title and to clarify comments related to LAHSA.