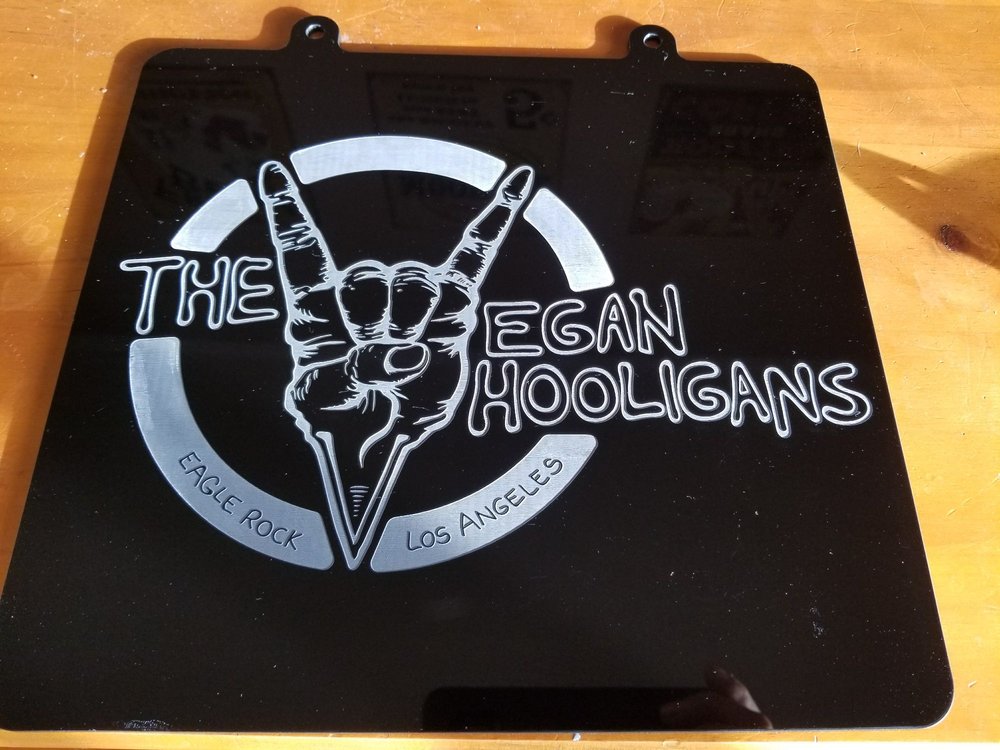 On the evening of Feb. 10, a line of patrons wrapped around Yosemite Drive and Eagle Rock Boulevard to try Northeast Los Angeles’ latest variation of plant-based food: vegan diner food.

The Vegan Hooligans will now be occupying breakfast and lunch spot Abby’s Diner 6–10 p.m. Fridays, Saturdays and Sundays as a permanent pop-up.

Chefs Jose Mejia, a native of Highland Park, and Franky Melikidse of Eagle Rock created The Vegan Hooligans. The two initially met in the music and art scene around 10 years ago, and both later worked at the vegan Mexican food truck, Plant Food for Plant People, a fixture on York Boulevard. Working there helped them forge relationships with the vegan community in the area, including key vegan influencers, according to Melikidse. Melikidse said many of Instagram’s most famous vegan influencers and bloggers live in the Eagle Rock/Highland Park area.

The Vegan Hooligans’ menu puts a vegan spin on traditional Mexican and American diner food. Listed at the top of the menu is the “Flaming Melt,” with grilled onions, spicy mayo, melted vegan cheese and The Vegan Hooligans’ version of fake meat, made out of bean curd marinated in their own special spice blend. The menu also features “El Burrito” as well as the “Sugar Mits,” empanadas filled with vegan cheese and green onions sprinkled with sugar. The pop-up also offers vegan versions of diner food staples such as chili cheese fries and milkshakes with pieces of vegan and gluten-free cookies. The prices on the menu range from $8 to $12.

Mejia and Melikidse both lived down the street from Abby’s Diner when they came up with the idea for a vegan diner.

“Living so close to the diner, I noticed that it was always closed [in the evenings],” Mejia said. “So I went ahead and reached out to the owner, and kind of just built a relationship off that. I just pitched my ideas for what we wanted to do and then this whole menu was completely brand new.”

From 8 a.m. to 3 p.m. daily, Abby’s diner serves classic American diner food such as tuna melts and eggs with bacon and potatoes. The owner of Abby’s Diner, Nott Nimanong, is thinking about possibly making Abby’s an all-vegan diner in the future, according to Tessa Raferty, a waitress at Abby’s Diner.

“[Nimanong] always has his hand in everything,” Raferty said. “He’s interested in doing all types of different foods, and with the amount of people that have supported this vegan diner thing, and he’s had the food, and he loves the food, [the idea of Abby’s Diner going all vegan] just goes hand-in-hand.”

Melikidse and Mejia have used their contacts in the vegan community to collaborate with Silver Lake baker Heather Kuklin, who has a line of vegan and gluten-free cookies known as Shugah Mama. The Vegan Hooligans’ “Berry White Shuga Shake” is an all-vegan milkshake with pieces of Kuklin’s vegan, gluten-and-refined-sugar-free cookies. They plan on rolling out more vegan desserts such as a vegan sundae in collaboration with Kuklin, according to Mejia.

“We wanted to create a whole diner experience,” Mejia said. “Unless you go to certain restaurants like Crossroads, there aren’t really many vegan milkshakes you can get. We pitched the idea to [Kuklin] and we collaborated with her and we use her cookies in our milkshake.”

“I think that there are a lot of vegan opportunities in the Highland Park and Eagle Rock area,” Pradel said. “And I think that can really be tied to gentrification and other processes of pushing out more traditional cultures of the area.”

Many of the vegan pop-ups and restaurants in the area support each other by going to each other’s events and openings, according to Melikidse. While they are active participants in this community, The Vegan Hooligans are also trying to differentiate themselves in the Eagle Rock/Highland Park vegan scene by giving their new pop-up a unique identity.

“A lot of the local vegan community — I have much respect for them — but they have a safe kind of image,” Melikidse said. “You know, we kind of grew up in the punk rock scene so we wanted to bring that kind of style, especially with the kind of music we’re playing, to the diner. This is kind of a character we came up with, we were kind of like this as kids so just now it manifested itself into a restaurant.”

Mejia and Melikidse said the name “The Vegan Hooligans” is also intended to be representative of their personalities.

“I’m not gonna lie, we’re not completely shaved dudes,” Melikidse said. “I mean, we’re friendly; we just try not go with what everyone else is doing, and we just wanted a name that represents who we are: you know, hooligans.”

Sasha Munch (senior), said that The Vegan Hooligans does manage to distinguish itself among the myriad of vegan options in the area.

“It’s different vegan food,” Munch said. “You can go somewhere else, you can go to like a healthy vegan place, I guess, but I haven’t seen diner vegan food.”

Melikidse and Mejia said they came up with the recipes for their dishes in each other’s kitchens, using the same methods they employ today. To make their food taste as close to traditional diner food as possible, they first imagine how they would make the dish if it were non-vegan, and just add in the animal-free alternative. They use Follow Your Heart vegan mayonnaise and cheese and Earth Balance butter.


Community outreach and involvement are important to Mejia and Melikidse, according to the duo. They said they teamed up with All Fired Up Coalition to raise money for homeless individuals and donated a portion of their proceeds towards providing meals for people on Skid Row March 2–4.

“We want people to bring everybody — kids and everyone,” Melikidse said. “We didn’t want to just be like, ‘hey this is a cool spot for vegans,’ we wanted to open up something that everyone enjoyed. We kind of envisioned somewhere where everybody’s welcome, it’s not just going to be a vegan hang out; it’s going to be a hang out.”